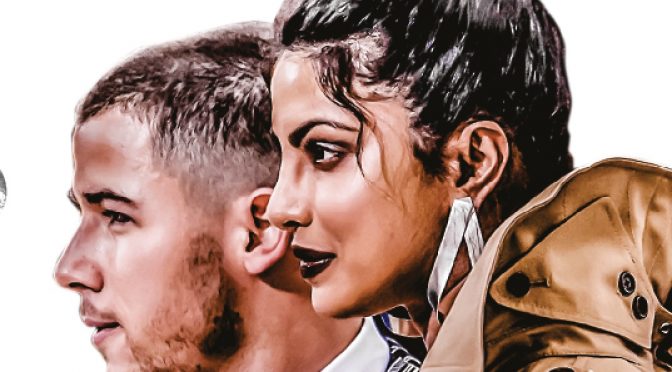 Straight off the bat, I’m really annoyed at the mindless jokes doing the rounds on Priyanka Chopra’s engagement to Nick Jonas. As you must have been informed, over and over again, with not one single media report eschewing the brandishing of numbers, she’s 36 and he’s 25 — and that’s evidently enough to trigger a barrage of concocted humour. There was one pictorial forward headlined: ‘Indian celebrities who have adopted kids’, with a photo gallery of Sushmita Sen and Raveena Tandon with their two girls (apiece), and then a photo of PC with NJ. One other claimed that when Nick was an “innocent” 8-year-old, PC was already (a grown-up) Miss World. A lot of members in a WhatsApp college group were tittering over one that said (roughly): “When we were young, pretty actresses were marrying older men… now that we are older, pretty actresses are marrying young men — how unfair is that?”

I find it strange that when, say, George Clooney married Amal Alamuddin, no one said something like: when she was in her early teens, Clooney was already getting a divorce (from his first wife). There’s a 17-year difference between the two, and there’s an 11-year difference between PC and NJ. So obviously it’s not the age difference, but the fact that a woman is dating — and probably getting married to — a man who’s a decade younger than her that’s getting everyone so excited.

“It’s not in my place to draw judgement, none of my business” someone I know shrugged generously, but went on to add nevertheless: “These celeb-types are damn weird: how can she marry someone so much younger — doesn’t she know he will lose interest in her in a few years’ time? Women age much faster in any case, and soon she’ll be 40, and he’ll still be in his 20s… It’s the case of the ticking time-bomb!”

I (gently) reminded him of (French President) Emmanuel Macron and his wife Brigitte. He’s 40, she’s 65, and they hold hands like teenagers and look hopelessly in love. “Pfft… he’s the French President, he has a country to run, so he may not have time to look around, whereas Nick Jonas…”

“Oh God, stop right now!” I had to butt in with the story of my favourite aunt who married a “foreigner” eight years younger than her — way back in the 60s. “Consider this: she was the daughter of a fairly insular household, nobody from their family had ever been abroad, and here was this woman who went away to London, all by herself, and at age 32 married an Englishman who was 24.” My friend had fallen silent. I plodded on. “Everyone was okay she was marrying a foreigner but a younger man was breaking-the-glass-ceiling kind of stuff. Yet, they remain [my sprightly aunt is now in her mid-80s, but she looks 60; her husband is in his late-70s, and he, well, looks his age — and so much for women ageing faster!] the most happily married couple I know.”

Besides, I continued, who has ever laid down that a woman cannot be with a man who’s younger than her — which constitution, which head of state, which leader with a mass following?

He had no answers. Not even to my next question, which was: “What’s the guarantee that if a woman married or went around with a man older than her, they will remain together? You mean, you’ve never heard of breakups of the ‘traditional’ format? A man can be 35, and a woman 30, but 10 years down the line, he will be 45 and she 40, and there’ll be plenty of 25-year-old women to catch his eye — so what’s to stop him from going for a younger woman then?”

Pleased with the steadfast silence I had elicited from deep within my friend, I thought back to a few years ago, when one of my school batchmates got married to a man almost 10 years younger than her; she has two kids from an earlier marriage, and one condition before she agreed to tie the knot was that the man would have to be a father-figure for her young sons. “That was my only concern — never the fact that he’s older or younger… who cares anyway?” she’d told me. All my other batchmates — spread all over the world — came together on Facebook and paid fulsome felicitations on her ‘wedding album’ photos where the radiant bride and groom looked fantastic together. Well, FB is kind of fake, I know, it’s where people always have their game face on, but whenever I’ve met my school friends in person, they’ve only had the nicest things to say about the “young” husband. “If I get married again, I’m definitely going for a younger guy — they are so much nicer, less chauvinistic,” one had said, and giggled hysterically when I asked if her existing (older) husband knew of her future marital plans.