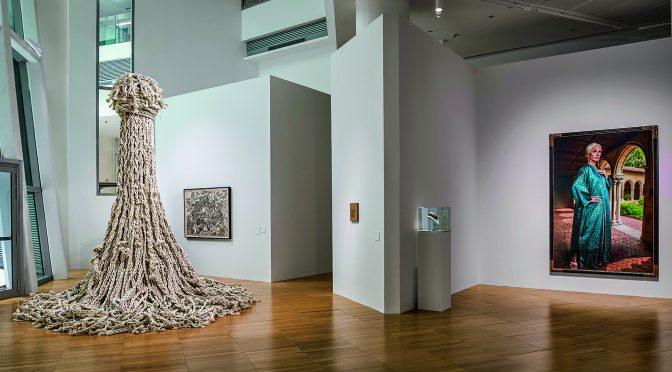 George Orwell said, “Whatever is funny is subversive, every joke is ultimately a custard pie.”

There’s a lot that’s clever-funny about an exhibition in Abu Dhabi, and it’s not highbrow or inaccessible, if that’s your worry. It’s even free.

The critic John Berger, in his four-part series Ways of Seeing (from where the exhibition borrows the concept), gave us a heads-up to not be too concerned by the “false mystification that surrounds art”. Art, he said, is not meant just for the “narrow preserves of the art expert”. Berger’s series is full of great, relief-giving, eye-opening titbits for those of us who feel like bumpkins gaping at incomprehensible stuff.

Think of the exhibition as a “brain massage”, says Maya Allison, gallery director and chief curator of the NYU Abu Dhabi Art Gallery. When I told her I didn’t understand the fuss about at least three exhibits, she walked me back to them, and broke it down for me, and then I got the fuss — sort of.

One such over-my-head installation was of threads in a room, ‘black and red acrylic yarn’, from roof to floor. You could weave around the threads and it wasn’t an entirely pleasant sensation. I didn’t want to go back into the room. This work is Fred Sandback’s Untitled (Sculptural Study, Twenty-two-part Vertical Construction), 1992-2016. Allison explained it had to do with how we’re used to seeing everything on the horizontal plane, but when you switch that around, the vertical aspect makes you feel giddy. Hmmm, okay.

Some works are immediately quirky and fun. The wall clock whose hands don’t move but the clock itself rotates: Gegen den Lauf (Wall Clock), 2012; Alicja Kwade), a box of Milky Way chocolates with a brass plate next to it that says NO, One on One (Milky Way), 2012; Hans-Peter Feldmann, and so on.

“If you want to access the truth, sometimes you have to make an effort, it’s not easy, you have to be curious and make that effort, in this case to crawl into this particular piece…” as Till Fellrath said about Gustav Metzger’s work Historic Photographs: To Crawl Into.

Fellrath gave a tour of the works to a bunch of media folks on September 2, a day before the doors were open to everybody.

There is a five-breath rule that Ossian Ward talks about in his book Ways of Looking. It involves “simply standing still for a minute or two to take stock: I’m using five deep inhalations and exhalations as a guide. Too often we judge a book by its cover, dismissing a contemporary work of art as soon as we see it: ‘It’s a boring video’, or ‘There’s too much text to read’, or ‘It’s too abstract, so I couldn’t be bothered’, go the usual excuses’.  I’m not suggesting you punish yourself for hours on end by looking at every piece you encounter in depth, only that you should give everything a little time, a few minutes of calm contemplation, before you move on to the next in our box of tools, which will hopefully help you unpick a work’s possible meaning.”

I asked Allison if it was a simple exhibition to curate. It isn’t. It may look simple or funny or easy, but she says it was a complex one. I got some insight into how walls and positioning — which work should be placed next to which — are such an integral part of a curator’s job.

Prior to Abu Dhabi, the exhibition was held in Istanbul and Brussels. The curators like to include a local flavour so that the works are “in dialogue with the local setting” says Fellrath. So you find works by Emiratis and Arabs: Hassan Sharif, Lateefa bint Maktoum, among others; and references to local topics. There’s Andreas Gursky’s photo: Dubai World 1, 2007. A cheeky one, Kohle (1TRekord), 2010; Alicja Kwade, is a pallet of gold bricks that points to how at one point even coal had great value. “It’s a play on who’s generating the wealth”, Fellrath explains. “And a very fun piece to start the exhibition.”

Nivriti knows almost nothing about art, but for the amateur interest

Ways of Seeing is on till Nov 17 at NYUAD. Entry free. For more: nyuad-artgallery.org