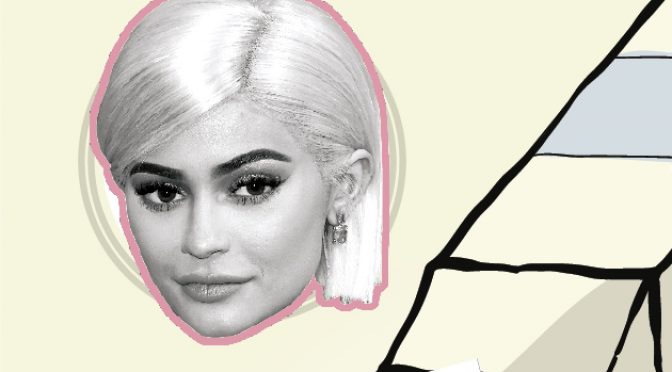 Thank goodness for Kylie Jenner. Amid all the noise on Twitter this week about god knows what all, Kylie Jenner offered respite that I am grateful for.Where to start about the noise? Possibly on an auspicious note, with the news of Anup Jalotia, devotional singer and his student of the year, 28-year-old Jasleen Matharu; or Woody Allen and his wife of 20 years, Soon-Yi Previn, finally “breaking her silence”. There was also Trump’s guy, dodgy Brett Kavanaugh still  harping on ‘I didn’t do it’; India made triple talaq a crime; and beat Pakistan here in Dubai. There was other stuff too obviously, but moving on.

Amid this barrage of news-news, tell me if you heard anything more entertaining than Kylie Jenner, 21-year-old make-up queen — worth $900 million (according to Forbes) — tweet: “last night i had cereal with milk for the first time. life changing”. (sic) The full-stop after the sentence was all her too.

Jenner has 114 million followers on Instagram, the eighth highest. Even Lionel Messi comes in after her on that list, at 12th, with 97 million followers. And, silly me, I hadn’t realised, but of course, Instagram has the most followers on Instagram. Back to Twitter though. So, everyone reliably went nuts after this cereal and milk tweet broke midweek. It generated (last checked) 173k likes, 25k retweets and 9.3k comments.

When other people on Twitter asked her if she had lost the plot, or, as one person put it, “Is this a rich thing?”, Jenner explained, “i always liked cereal dry i never bothered to put milk” (sic).

I cannot grudge her this. In boarding schools, kids would tear open packets of Maggi and Wai Wai noodles and munch those plastic slabs dry. Nobody added water. Why do we expect Jenner to add milk? Well, maybe we expect her to have at some point been through the kiddie rite of passage, but well, her life, her ways.

Then, there were curious kitties online most taken in with whether she put milk first or cereal. Apparently, there are people who add milk first, then float cereal on top. I don’t know these people. In the coming years, though, just wait,  there is bound to be a business school study on the effect Jenner’s endorsement would have had on the sales of Cinammon Toast Crunch, a flavour that in a subsequent tweet, she described “amazing.” I would look for it myself, which would be a move up from the days of Mohun’s cornflakes and Mother Dairy milk but I’m off dairy — and milk (Twitter, not yet).

One user, Tatianna, wrote: “Now watch and cereal gonna start flying off the shelves. She gunna start a cereal line with some designer leche girl bye” (sic).” Someone else chimed in on Jenner’s tweet: “Have you tried butter on bread?” Ha. Shouldn’t laugh at how a person can arrive so late at the joys and comfort of soggy cornflakes, but…

She even expressed an interest in almond milk. Someone called that also “life-changing”. Others preferred soya and chocolate milk. The entire thread was a revelation. I want to know when curdled milk will be declared the next nutritional touchstone. It should at the very least be life-changing.

That one tweet of Jenner’s sent me down a rabbit hole of all her other tweets. I realised I had been living in darkness. I needed to follow this woman. There is much to learn. How to get so rich so young, for one. For another, I want to know why her seven-month-old kid is called Stormi with an ‘i’ instead of the letter you would think it might end with. But maybe given that I am $900 million poorer than her, I should stay in my place, not ask too many questions.

I also learnt from Her Wealthiness, the term BOGO — buy one, get one. And that Jenner believes she her cousin Kim (maybe you’ve heard of her?) are into “completely different products”— both makeup lines, however.

Kim Kardashian West’s line is called KKW. In a Vogue article that feaures Jenner doing her makeup, Jenner purred her heart out, “Me and Kim do not compete. A lot of people think we might, but we really like making completely different products and both enjoy each other’s stuff. The more makeup the better”.

Then, I watched the video embedded in the article, 10 minutes 47 seconds long. Very helpful. She allowed Vogue to film her bare face and I thought, given her market value and her orange eye shadows that have names like Juicy, it was brave of her. I was warming to Jenner.

Opening up further, the top model-entrepreneur-cereal newb, also said that lipstick made her feel confident. She used the phrase “all my glam people” which I can’t wait to use, but who will I use it on? Still. I wasn’t bored.

What else did I learn? That she loves blush; that she can fill in her lip liner with eyes closed; that her mother (Kris Jenner) once mistakenly used black eyeliner on her lips at Disneyland or Disney World or wherever; that mommy Kris also let her traipse into sixth grade wearing purple eye shadow. It was her dad, however — the retired Olympic gold medal-winning decathlete Caitlyn Marie Jenner (born William Bruce Jenner) — who was the spoilsport, a bit anti–make up, back then.

I learnt also that she thought it would be cool if her kid, Stormi, wants to take over her make-up empire. And I found myself tearing up that Kylie added “if she wants to”. I like that. A heart, along with fine taste buds in breakfast food.

Far be it from me to decry pop culture idols of our time. I honestly have no idea what this one gentleman, Lewis Maxwell, meant when he groaned on Twitter: (sic)“Out of all the crazy shit happening in the world, why is Kylie Jenner tried cereal with milk trending? The worlds backwards man.”

Since Kylie has deemed it okay to wear inanities on our sleeves: Nivriti is wild about oats