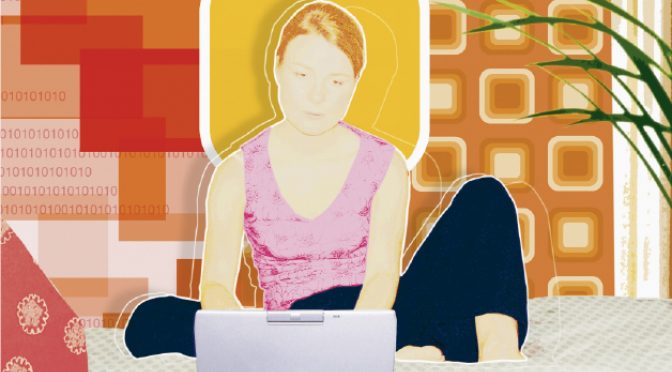 Half of mum’s face was out of shot. At 59, she fits firmly in that generation that tech forgot. Dad was in his usual position; hovering in the background, teetering on the step that leads from the kitchen to the garden; cup of tea and ciggie in hand. Kev, my brother, passed in and out of shot, poking fun at mum’s lack of gadget know-how, before turning the iPad from landscape to portrait mode.

Mum and I took the lead during that call. We always do when we Skype (or used to!) Dad gave a casual nod every now and then, a kind of acknowledgement that he was half listening to the conversation. Then he glanced over his shoulder in the direction of the laptop with a brief interjection: “you’re looking well, kid”. A common term of endearment he uses when I video call home (or used to).

During that catch up back in April, I was a seven-hour flight away from my family. Me in Dubai, them in Ireland. It was 11.30pm my time, and I was plonked in my bed; laptop carefully balancing on my knees. With the screen just 20 inches from my face, I could see their every expression. The hearty laughs when dad tried to blow out his birthday candles, but failed; the look of confusion on mum’s face as I tried to guide her into rotating the iPad.

I wasn’t at home, but seeing them in familiar surroundings; the brickwork arch above the cooker to the right of mum, the kettle atop the worktop in the corner (used twice to fill dad’s tea mug during the one hour and 47 minute Skype call), it brought with it a kind of comfort, like I was closer to them even though physically, I wasn’t.

Fast forward to 10.43pm on Tuesday night this week, our catch up was a little different. This time, a 19-minute phone call. No expressions on faces to gauge reactions, no confused look on mum’s face, no casual nod from dad in the background.

For the past five months, those quick catch ups on the phone have become the norm for us. The calls are usually cut short because of the expense. As the warning signals beep on the line (alerting me that my phone credit is about to run out), I’m left rushing to say “see ya, love ya” before being abruptly cut off. That most recent call cost about Dh45; not a small sum for 19 minutes of rushed nattering.

Aside from the cost element, that lack of visual interaction has left me feeling divided from my folks and brother. The catch ups aren’t as regular and I feel like I haven’t seen them in forever. It got me thinking: life as an expat without video calling is isolating.

The UAE’s Skype ban has been a huge point of contention for people here — none more so than expats. The Telecommunications Regulatory Authority (TRA) has highlighted the availability of alternative paid-for video-calling services through phone networks here, but for me, they’ve been a flop. They don’t work for everyone, they don’t work for me.

Mum had a disastrous hair cut the other day. She sent pictures on messenger, but it wasn’t the same. If she did the big reveal over video chat, I’d be waiting to hear dad’s cutting comments about how every haircut is a bad haircut.

I missed seeing her flustered reaction to the lopped off locks; the expletives she would have used to scorn the helpless hairdresser, tasked with the impossible.

I put the question out there by way of a Facebook post: how’s life without Skype?  It was aimed at those living away from loved ones. Within two hours, the comment count stood at 64.

“I’m missing out on family occasions back home. Before I would be Skyped into them. It’s very isolating with the husband working away six months of the year. Only time I’ve ever felt homesick in five years is since Skype was blocked,” Leonie Elderkin wrote.

Audrey Blincow said life as an expat without Skype is a much more “lonely place”.

“I miss seeing my elderly parents enjoyment of seeing us out here. Using alternatives just doesn’t work for them.”

Echoing the sentiments of many, Clare McColl said the loss of Skype has created feelings of isolation, loneliness and homesickness. “I am sure it has contributed to some people making a decision to go back home. Children and elderly parents need to see your face and gauge reactions. Phone calls just aren’t the same and don’t provide the same degree of familiarity and comfort.”

While one called the ban “antiquated”, another said it was “heartbreaking”.

When the alternatives don’t work and a phone call just doesn’t cut it the way a video chat does, bans like this just widen that distance between here and home. And with that comes a lot of contemplation.

But a news article published last month provided a glimmer of hope for people like me, Clare, Audrey — and the 62 others that commented directly on my Facebook post.

“Microsoft is hopeful that the ban on Skype in the Emirates will be lifted.” The news hasn’t been officially confirmed, nor have lift dates been revealed, so only time will tell. But in the meantime, British expat Tracey Smith has offered a little perspective.

“I lived in Thailand in the mid ’90s. We had a phone at home but it rarely worked. We had to go to the national phone company and sit in a booth hoping it would work, it rarely did, so you have no idea how much easier you have it now.”