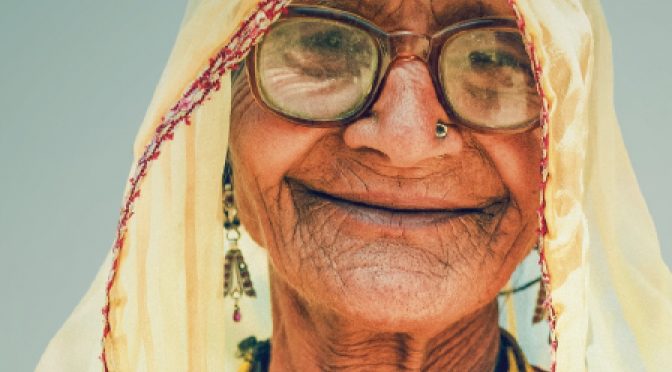 I recently read a newspaper feature on a hamlet called Dhingakhedi, in the central Indian state of Madhya Pradesh. It’s been nicknamed ‘centenarian village’, and the story follows the life trails of a handful of men and women in the 100-plus age bracket, who are absolutely unfazed by the fact that they have achieved something the rest of the “material world” is desperately trying to live up to: age is just a number, and you can be happy and healthy despite being well past your (alleged) “sell by date”. (Also, loved how beyond a “certain age” — in this case, 100 — nobody is unceremoniously dumped into silos: a 100-year-old and a 110-year-old, never mind the decade-long gap, are comrades-in-arms.)

All the centenarians interviewed and photographed have led predominantly agrarian lifestyles. They don’t believe in urban migration. They live with their families — and the rest of the village is their extended family. (I remembered a conversation I had with a friend on “community living”. He emphasised how it’s been proven that those of us who live among “larger numbers” tend to be happier, and then go on to live longer… “less stress, more endorphins,” he explained). Come evening, everyone in Dhingakhedi has time to sit around a common hangout area, and indulge in light banter over over-boiled, sugary <chai>. They don’t believe their lives are a failure because their children haven’t been educated in English-medium schools/colleges and sent to the city — or overseas — where they could have driven fancy cars and lived in condominiums. Their children — and grandchildren — live with them, perfectly content being farmers, not having high ambitions, in sync with the gentle pace of the countryside.

These village folks have no idea about gluten-free products, keto diets and “conscious” lifestyle choices. They have simple <daal>-and-<roti> or milk-and-<roti> for dinner; they don’t go around looking for fad foods and freshly-pressed kale juice; don’t know fatty fish like salmon is great for Omega 3, especially if it’s the Norwegian or Scottish variety. They are not beset by any great urge to be on Facebook or Instagram, or tweet out unsolicited observations: Internet technology is limited in penetration, and they’re fine with that. The women don’t buy anti-ageing products; they are blissfully unaware that, in many parts of the world, wrinkles or facial sunspots need to be hidden with concealers — else everyone sits on judgement.

Unlike the rest of us, The Aspirationals, these guys probably don’t spend hours debating the futility of existence and tossing around nihilistic lines by Albert Camus. Or waste two hours getting dressed for a party, and then feel dismal when their selfie doesn’t garner too many Likes on FB or Insta (maybe because the algorithms had gone haywire).

Now, the weird thing is: we all know the wisdom about the simple pleasures of life. Last weekend, when I watched <Sui Dhaaga> — that’s being promoted as a story of simplicity, showcasing those who live on the fringes (and fringes of urban culture, literally), I enjoyed the so-called banality of humdrum existence as projected on reel; it was like a breath of fresh air: the de-glammed outskirts of Delhi seemed so much more identifiable than the rarefied quarters of NYC’s Times Square… and, yet, we all have a compulsive need to tomtom overseas travel — complete with business-class seats and five-star suites —  and designer wear, rather than be content in the ungimmickry of no-frills simplicity.

Most of us (with the notable exception of a friend, who, when I forwarded him the link to the story, said, “Meh, who wants to live so long?”) — want to live long <and> be happy, but will not cut back on our lifestyles and embrace artlessness, which may well be a stepping stone to a happier — and, by extension, longer — journey of life. How many surveys and TED talks have pointed at simplicity being the touchstone of genuine fulfilment? We discuss these case studies at high-octane urbane settings, sigh deeply at our inability to subscribe to such primal pursuits, and then immediately try and sniff out haute trends.

A few years ago, my cousin and his wife, who had been aspirational city slickers for the better part of their lives, “consciously” decided to move to the (bucolic) heartland. “Whenever I looked back at my ‘achievements’, I’d been under pressure to outdo them,” my cousin had said. “In a typical gathering of ‘like-minded’ people, you are expected to be either in line for another promotion, or be upgrading your perfectly-functional car, or talk about your son/daughter snagging an Ivy League scholarship — of course, I’m supposed to be in a financial position to pay for the admission in any case, but it ‘feels’ even better when your progeny is deemed ‘super bright’… It was insufferable,” he added, “so we decided to build a house near a forest, and spend the rest of our lives there.” (Interestingly, their ‘retirement abode’ happens to be in the same state as Dhingakhedi: Madhya Pradesh!)

“What was the toughest question you had to face?” I’d asked him.

“I don’t know if it qualifies as a tough question,” he laughed, “but I thought it was telling. Someone asked me: ‘Who will constitute your social group now? Villagers and tribals?’”

To which he replied: “I’d rather hobnob with those who derive pleasure from watching a sunset, than those who filter it on Instagram.”

Obviously, he and his wife were the first people I WhatsApped the Dhingakhedi story link to, along with the line: “Here’s wishing you centenarian success.” The double ticks didn’t show up for the longest time. Many hours later, he got back: “Great read! And sorry, Internet is very intermittent here. We are having sugarcane juice sitting on a charpoy, chatting with a couple of farmers… what are you up to?”

“Getting ready to go to a fashion show,” I replied glumly.