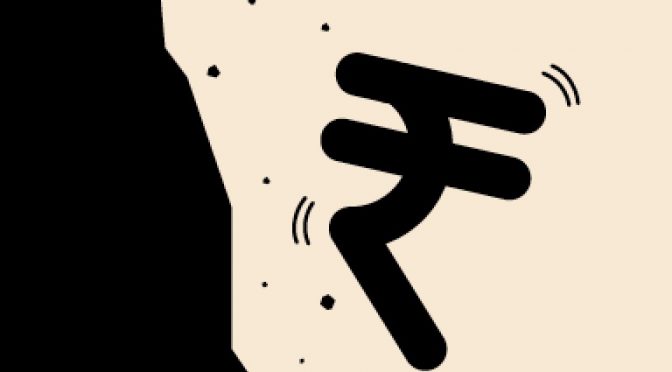 The rupee! The thought that life is all about the nickel was thrust upon me by circumstances, watching how my parents had struggled in different roles to bring us up.  Every morning when I was about to go to the school, my dad pretended to be busy tending to the plants. He had two leather bags — stuffed with memories but no cash — that he had brought from Colombo. One was full of suits, all white.The other was smaller and full of papers, including his expired British Empire passports. Whenever I stretched my hand for money, he would routinely pull out the smaller one from underneath his bed and rummage around. By the time he lifted his face from the pile of papers, with misery writ large, I would have left the scene. So I decided to temp as a tuition teacher when I was in high school. My first earnings — Rs25 from five girls, a year or two younger than me — were customarily handed to my dad. The day the rupee made me proud. Since then the rupee and I had maintained a love-hate relationship. It was elusive whenever I chased, and I didn’t care a damn when it finally came knocking.

After college, I earned Rs3,000-4,000 from tuition. One of the highest paid at that time. But the irresistible call of journalism took me to the ghettos again. The paltry stipend of Rs600 a month in a metropolitan city like Mumbai wouldn’t even suffice for travel, let alone food and accommodation. Then came a sister’s wedding. Having arranged a loan from my brother-in-law in Dubai, I pushed off to Kerala to make wedding arrangements. Two days prior to the ceremony, on a sunny afternoon, family members sat around staring at each other.

“Suresh, where is the money?” It was mom.

“Well, wait; brother-in-law will send it. He had promised.” I tried to calm her down.

“When? We have no time.” She sounded desperate, when I heard a scooter rolling into the courtyard. The young guy wearing dark shades, still saddled on the bike in Bachchan style, called out my name.

“That’s me.” I stepped forward. There was no handshake. I stayed on the veranda and he on the porch.

“Which company is he working for?”

A couple of more questions followed after which he stepped off the grey Lambretta, opened its tool box, and pulled out wads of cash wrapped in a newspaper.

“Oh, first time customer? One petti is one lakh?” He kick-started the scooter, signalling to go.

“Please come in. Have some tea.”

“What’s your name? Coming from far?”

He smiled, nudged his shades up, revved up the scooter and disappeared behind the summer glow. He was a ‘havala’ agent who ran a parallel money exchange business offering a better rate. They seldom reveal their identity.

A year later, when journalism took me across the seas in 1989, they were the essential contacts in the diary, after the police, hospital and civil defence. A dirham fetched just about 3.5-4 rupees in 1989, while the agents offered 25 per cent more. There were no receipts or acknowledgements, yet the business thrived on sheer trust, greed and an appetite for risk. When people needed to send large amounts to meet wedding expenses or big purchases, they availed of the private service.

As salaries started to look up back home, talk at weekend parties in Dubai, after a couple of drinks, staggered towards the pathetic exchange rate. Any banker attending the parties was driven to tears as he was given impromptu lessons in economics and finance by any Tom, Dick and Harry. Everyone acted as if from Harvard. People prayed for a miracle, which essentially meant ‘some bad things to happen’, so that the rupee would crash. Logic and wisdom had no place in the world of greed.

And the miracle did happen. I was away on a visit to the UK in 1991 and was in the dark about the political drama unfolding in India. Back at the Dubai airport, my brother-in-law, who was on a visit looking for a job, gave me a hug which was warmer than usual. There was a glow in wifey’s eyes, as if I had just gifted her a jewellery shop. My son played on merrily as if he had just inherited Toys “R” Us from Charles Lazarus. A Pakistani friend called from the office to congratulate. “Mubarak bhai,” he said. “You still have a long way to go to catch up with us,” he said.

I wrenched my son to the balcony and asked, “Hey boy, tell me what’s happening. Why is everyone so happy?”

“Amma said your salary has doubled. Ask her. She was talking about shifting me to Modern School.”

Making sure wifey was in the kitchen, I called the news editor. “Mr Rao, thanks for doubling my salary.”

“Are you mad? By the way when did you come?”

“Didn’t you know my country cousin, prime minister Rao, devalued the rupee, not just once, but twice in as many days? Seven to nine per cent on July 1 and then again by 11 per cent on July 3. So the exchange rate has doubled.”

The rupee had been on a slippery road ever since. An old remittance receipt from 1989 showed the rupee at 4 against the UAE dirham. Another receipt dated June 26, 1991 — a couple of weeks after the devaluation — showed the currency had fallen to 5.65 against the dirham. It was 7.4 on October 4, 1992. And 20 plus today.

Some time in 1992, when I was about to close the edition, there was a frantic call from my mom back home.

“Forget fine, fine. You need to send more money from now on. In fact, double.”

“After devaluation, transportation charges have gone up. Lorries are not bringing vegetables from Andhra and Tamil Nadu. Tomatoes and onions burn my fingers. Labour charges have doubled. Because you are an NRI, we are no more under BPL (below poverty line). I cannot manage. Otherwise send your wife back to run the show. You know inflation? That thing is rising like a rocket every second after the devaluation. Read the newspaper.”

“Amma, I am producing the newspaper. “