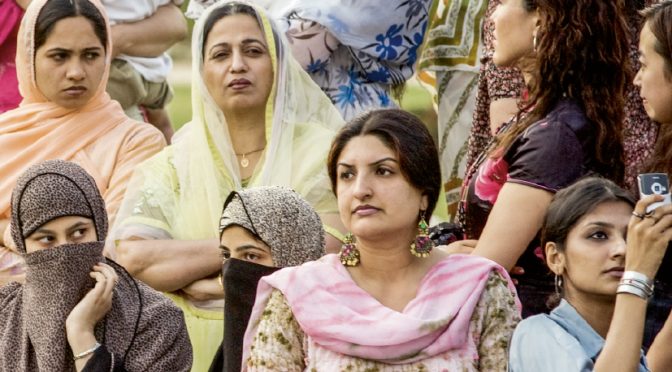 But all this is not okay. It’s only that we women have been conditioned to believe that these acts by the opposite sex are okay as long as you haven’t been… raped.

Everyone possesses six senses except women. We have a seventh one too which kicks in when dealing with men. Women have antennas that pop up when danger is lurking, even if it is an ‘okay’ act such as staring.

For years, there has been no proper definition of sexual harassment. And more so because voices of women who dared to speak up have been drowned in the din of patriarchy.

Recently, the worldwide movement of #MeToo or should I say #HeToo, caught up in full force in India. Skeletons tumbled out of cupboards because these brave women decided they had had enough.

Across the border, in Pakistan, mindsets aren’t too different. Harassment is rampant, but why haven’t Pakistani women said #MeToo until now?

In April, model and singer Meesha Shafi, an empowered woman and a working mother accused popular singer and actor Ali Zafar of sexual harassment. In response, she faced a severe backlash and was also slapped with a legal notice from Zafar. Both parties are still fighting it out in court.

Pakistani author, Bina Shah, author of Before She Sleeps, thinks it’s going to take a miracle for #MeToo to catch up in Pakistan.

“Women are terrified of speaking up. When they do, it results in such a backlash that everyone else gets frightened,” she says.

“In fact, even women who supported Meesha Shafi when she made allegations against Ali Zafar were abused and harassed by those who don’t want to see change in our society,” she says.

Gender activist, writer and media personality, Zoia Tariq says that sexual harassment in Pakistan is more about “she must have asked for it” and less about a social issue that needs to be addressed.

“The staggering number of women who face it on a daily basis prefer staying silent as they have been conditioned to believe that it’s part of the package of being a woman in Pakistan,” says Zoia.

Bina sees another reason for the movement not being as strong in Pakistan as in India. “Unfortunately we don’t have a large enough middle class that would see women coming out to work in the numbers that they do in India,” she says.

“There is a great stigma against any working woman who finds herself in the unfortunate situation of being harassed. There is no sympathy for the woman. The only answer she gets is: If you didn’t want to be harassed you should have stayed home. No recognition whatsoever of the fact that working outside the home is an economic reality for many. And sexual harassment and abuse are somehow perceived as a reality of working outside the house,” she adds.

Zoia feels harassment is under reported. “This is because of the list of questions the victim has to face. What was she wearing? Why was she out till late? Why didn’t she take along a male member of the family with her? Why did she smile or laugh? Was she wearing a lot of make up? Did she encourage him in any way?”

She says, “It’s not always the woman’s fault in cases of sexual harassment but still family members are too ashamed to talk about it. Also, after each reported case, the society and religious groups reinforce the message that women should stay at home where they are safe and protected instead of teaching men to be respectful.”

Bina says that despite the issue being raised, there have been isolated incidents here and there of men being arrested or removed from their posts for harassment.

“In September, a professor in Islamabad’s Bahria College was sacked after 80 students reported being harassed by him during an examination,” she says.

“We have laws against sexual harassment at work, and every institution is required by law to have a committee in place that can investigate complaints. We have a Federal Ombudsman, Kashmala Tariq (who was responsible for investigating the professor in Islamabad) to whom complaints can be brought,” says Bina.

“Younger women are being more vocal about harassment, and some men are supportive — but most are still falling back on the idea that women only bring up harassment to gain fame or make money. They are scared and want to protect themselves and their privilege,” she says.

Zoia also says that harassment has been accepted as a norm in Pakistan hence, anyone who complains about it is labelled as a trouble maker or attention seeker. “These women lose jobs and respect at home and in the society…all because a man harassed them or took advantage and they resisted,” she says.

#MeToo is what every woman in Pakistan can relate to without ever sharing her story.

“So we in Pakistan, says Bina, “are watching and waiting to see whether these men will face justice in India. A positive outcome will have a positive effect in Pakistan, and the movement may take off here. But it will take time, perseverance, and courage.”

Asma is an observer of culture back home in Pakistan. She enjoys sunsets at the Sharjah Corniche