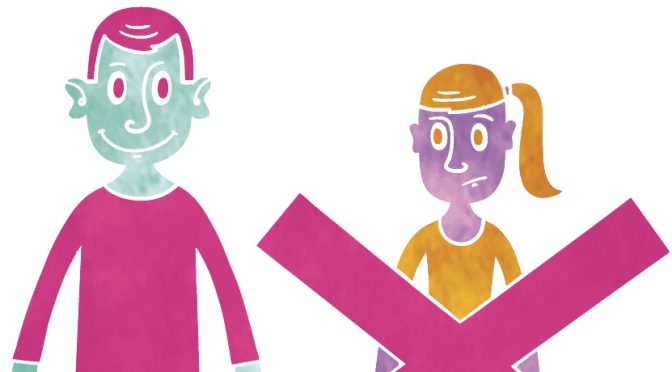 Normalising gender stereotypes begins at home. When I was 11, my mother was steadfast about me washing the dishes after I’d finished my meal. I had to wash, rinse, and leave my plate and glass to dry near the kitchen sink. She drilled the habit so deep into my head that when I turned 13 I almost took a plate in a restaurant to the washroom. Mom instilled the same values into my sister when she turned 11.

Today, my little brother is 11. He is not made to wash the dishes.

Oppression is also practised in schools.

From grades 6 to 12, I studied in an all-girls school in the UAE. In 2006, my grade 11 home science teacher would tell us, “Girls, don’t wear sleeveless tops and take pictures with boys when you’re outside of school. If your son or daughter sees those picture years from now, how will you be able to face them?”

Today, my 17-year-old cousin tells her friends after pictures are taken at her birthday party, “Guys, please do not upload these pictures on Facebook. My mom will kill me.”

For a brief three years in college, I finally had the freedom to pursue whatever I wanted to do with my life. I studied Journalism and English Literature at St Aloysius College (Aloy), a 138-year-old institution run by Jesuits in Mangalore, Karnataka, India. Harassment, abuse, and ragging of any kind were not tolerated.

Though I was safe within the university campus, I was warned by my family that a girl living alone in any city in India needs to be on her guard. “Be careful. Don’t go out at night and get back to the hostel at 6 pm,” said an aunt. My male cousins were told, “College is going to be the best time of your life. Enjoy it.”

While I was in college, I lost count of the number of times faceless men groped me in buses, trains, and crowded railway stations – sometimes in broad daylight. When I tried to speak to my hostel warden or even my classmates about it, all I got was a sympathetic nod and a warning. “Who asked you to stay out late? It’s ok, nothing too bad happened, so forget about it”. Going to the police was out of the question because in most cases, I could not even see the face of the man who groped me.

I came home, felt dirty, cried, and thought to myself that this is all my fault. At 17, I learnt that I needed to watch out and be on high alert at all times. Even today, if I head back home after 12 am, I have palpitations and have to speak to my friends or parents on the phone while walking from my parking lot to my apartment in Sharjah. Even though the UAE is one of the safest places for women, it is terrifying when men roll their car windows down and hoot.

I did enjoy my college life thoroughly. Knowingly or unknowingly, the encouragement from my then English literature professor, Dr Lurdusamy Arputhem (retd.) and Prof. Alwyn Vincent Desa, and all my teachers at St Aloysius, I realised I wanted to become a journalist, and I was motivated to voice out all kinds of injustice, especially against women.

In 2008, I began my first gig as a cub reporter/ intern at Khaleej Times. Since then, I have worked at four media organisations, one IT giant, and one public relations firm in India and the UAE. In 2010, I got a job as a lifestyle reporter for a news website in Bangalore, India. When I informed a college classmate about my new situation, he said, “You can do so many food reviews and go for fashion shows. That’s great for girls.”

End of 2010, I began work at a national daily as a reporter/ sub-editor. A senior lady editor said, “Your parents are in Dubai. That’s good – so when you get married, you can give a big dowry, no? (laughs) Just joking.”  Another colleague said, “You stay alone in an apartment? That’s nice. So, boys must be coming over all the time. Having fun, eh?” When a group of girls in the editorial and I would raise our voice against so-called ‘casual’ sexist remarks, the next defence from several men was and remains: “Oh, be careful. She’s a feminist. Can’t tell them anything.”

Exactly a year ago, the #MeToo movement emerged from the United States. I have been following it since. A friend said, “This is a fad. The noise will die down.” I prayed it wouldn’t, and strangely, my prayers were answered.

At the 2018 Golden when Oprah Winfrey accepted the ‘Cecil B. de Mille Award’ and said, “No one will ever have to say ‘me too’ again”, my heart filled with hope. Maybe real change is finally here, and women will finally be heard without being dismissed as silly or whimsical or girlish. The movement became global, and slowly, yet steadily, powerful men in entertainment, politics, and journalism were named.

In a matter of days since the movement took a decisive turn this first week of October, India shone the brightest on a Google Trends interactive map that shows where searches for #MeToo are trending.

Social media became a powerful tool for women who have spent years and decades locking up a scarring memory of shame, deep in their psyche. Small individual voices became one, and as a collective, women were finally speaking up. My phone began to buzz nonstop as men and women in various WhatsApp groups excitedly shared links to tweets. A friend said, “It’s a good thing. Big names are coming out.” I agreed.

However, to my shock, a few men and women I know continue to say #MeToo is a political fad; a waste of time movement that will eventually die down. Someone said, “See, those women who have been raped or abused, the movement makes sense for them. Not for some guy who flirted innocently.” They said about Priya Ramani’s statement against India’s MJ Akbar, “Why did she wait for so long to speak up? She should’ve told someone when it was happening. I know women who will fight under any circumstance.”

As my friend Jyotsna rightly said, “Trivialising behaviour as joking or flirting is the problem. What may be a joke or a flippant/ flirtatious remark to one is a source of discomfort for another. Those men and women who cannot distinguish between consent, injury, and or flirtatious behaviour, it is best they sit this argument out.”

Policing what people can speak about is another form of victim blaming. Men and women are wired differently, and for most cases, raised differently. Our experiences are different from men, and it is difficult for us to speak about the traumas we’ve been through. As the movement continues to gain momentum, it becomes the responsibility of all men — and women — to provide women with a safe space to speak their mind, without questioning their credibility.

When Dhanusha is not running behind her four-year-old Labrador, she sings and writes songs