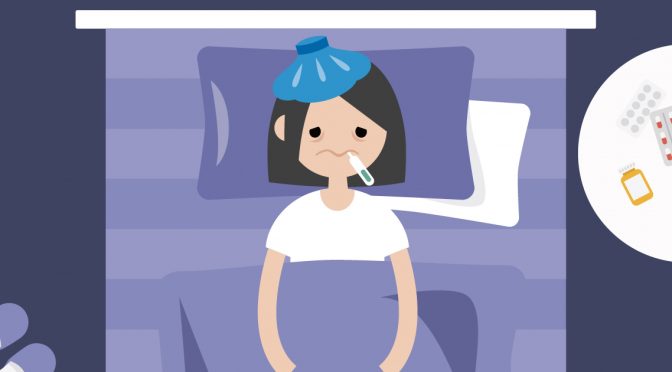 In the everyday good-kilter context, I don’t fall ill too easily. Occasional bouts of coughing or feeling mildly feverish or nursing a nagging headache are all par for the course; all I need to do is call in sick for a day (if I can help it), pop a Panadol, put away the phone in a different room, and surrender to sleep.

Touchwood, say a lot of people to this. Touchwood, they say, mostly because I live alone.

I don’t think I’ll be able to do the math: the number of times I’ve heard articulated concerns that I should be particularly careful about my health (more than the average Joe at any rate) because in case I fall sick, there’s no one around to take care of me. Of course, a whole lot of folks also chip in with: “Please call if you need any help — from taking you to the hospital, to whipping up a healthy broth to soothe your throat.”

Thank you very much, I say sincerely. But I really doubt if such good intentions are implementable when it comes to the crunch. One of my fave writers, Hannah Betts, in a wonderful piece in The Telegraph titled ‘When Illness Strikes, Living Alone Can Be Dangerous’, grappled with this existential crisis living in London — when she was dealt a low body blow and had to seek out medical help herself.

“Despite a friend tweeting, ‘Ambulance: a vehicle with flashing lights useful for conveying the sick to hospital’, it proves extremely difficult to call one for oneself. Had I been summoning said vehicle for another I would have done so in an eye blink. Alone, I felt embarrassed, fraudulent. I had no idea how ill I might be, or whether I was being a whinger. Besides, I was so delirious, I thought my former maths teacher was in the room. None of my friends live particularly close by, my family way beyond the capital. My ex-boyfriend has left London, my most recent lover did not occur to me. I have a legion of glorious friends, but — in that bleared moment — had never felt more isolated.” This excerpt, for me, has become like a prescription since Betts penned it (about five years ago).

But putting all this behind me, one morning last week, I woke up with the feeling that I’d rather just curl up and die: raging fever, wracking cough, pounding headache and a complete inability to keep my eyes open. I was flattened. Literally. Couldn’t get up from bed the whole day. All notions of going to the doc had to be relinquished (alone or in the company of friends) — because the minimum requirement for that would have been staying awake for at least five minutes. I could barely walk from my bed to the kitchen to get a bottle of water. All I could manage was send WhatsApp messages to key people at work, along with a note that I probably will be non-communicado for the rest of the day.

By evening, the fever had receded a bit, but it was still a task to take a few steps, my appetite had gone on a sabbatical, and I was pretty sure I was being delusional. It was bluish-grey outside, as I lay staring at the non-incandescent ceiling light in my darkened bedroom. I’d spent one of the worst days of my life (health-wise) all alone, and, in its aftermath, I realised I could view life in either of two ways.

One, being sick while living alone could set alarm bells jangling furiously. I’d be reminded of that one sentence from Bridget Jones’ Diary, though I don’t have a pet at home: “Even the most outrageous minxes lose their nerve, wrestling with the first twinges of existential angst: fears of dying alone and being found three weeks later half-eaten by an Alsatian.”

Alternatively, I could thank my lucky stars that no one was — or a whole bunch of people weren’t — trying to prop me up against a pillow, and pressing cold compresses on my temples, when all I wanted was to be left alone to sleep and slide into shadowy recesses of an imagined mind. Or trying to force-feed me while I wanted to throw up and say it’s quite okay to not eat for a couple of days. Or trying to look interested each time someone asked, “How are you feeling now? Is the medicine working? Now it’s time for you to start gargling…”

So, while I was thankful for all the offers of homemade pumpkin soup — yes, news had gone viral, from about three people to almost everyone in my WhatsApp directory — and drives to the doctor’s chambers, and queries of ‘Can we come see you for five minutes — no more?’, I had to say thanks, but no thanks. I was too ill to be downright happy in sick solitary splendour — couldn’t muster up that much zeal. But I think I was hazily happy.