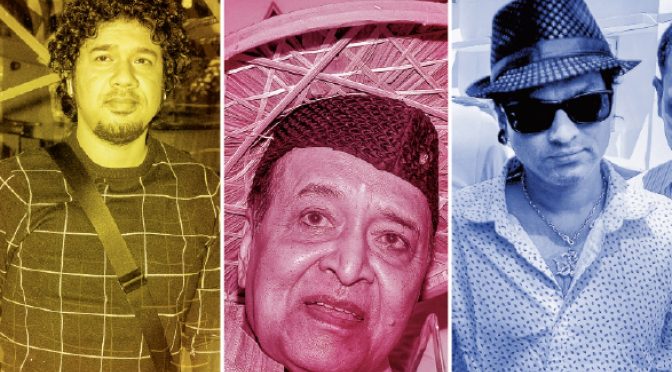 For a land that has heard many a soul-stirring voice, Assam has seldom produced musicians that have covered themselves in Bollywood glory.

Bhupen Hazarika wove a musical universe of his own but Bollywood lacked the imagination to create space for such a genius. Of course, nobody expected Hazarika’s music to adorn mediocre films.

But growing up in Assam in the early 1990s, my little world was filled with stories of my late mother; how her father was Bhupen Hazarika’s friend and mentor.

Ah, Bhupen Hazarika, the symbol of Assamese pride, whose music often earned him comparisons with Bob Dylan. And my grandfather was his friend and mentor. It still makes me proud when I see old pictures of Hazarika with my grandfather in family albums. My grandfather left this world days before my mother’s wedding, but not before leaving his imprint on the Assamese cultural landscape as a painter, writer and an exponent of the Assamese classical dance form, ‘Sattriya Nritya’.

Those were the All India Radio days when we would be mesmerised by Hazarika’s masterpieces.

Why didn’t he make music for Bollywood movies? I would often ask my mother.

“It’s because his music is so different,” she would tell me.

“Why do you think he’s such a revered person in Bengal? You know Bengal has some of India’s finest writers and musicians. And yet they have placed our Bhupen da on the highest pedestal along with their own icons!”

So, it was only fitting that Bollywood finally got a glimpse into Hazarika’s genius when Kalpana Lajmi made a movie — Rudaali (1993) — based on legendary Bengali writer Mahasweta Devi’s short story.

The story of a woman who cries at funerals for a living inspired the maestro to recreate his immortal Assamese song Buku Hom Hom Kore. The vocals of India’s most iconic singer, Lata Mangeshkar, in the Hindi version — the achingly beautiful Dil Hum Hum Kore — coupled with Hazarika’s use of the ‘sarangi’ have endured.

But this was 1993 and Hazarika was 67. It was then that a precocious 19-year-old with long, curly hair and a cavalier disregard for conventional norms entered the Assamese music industry. He brought in vibrant sounds and melodies that were influenced by the west. And yet his songs were rooted in Assamese folk. His name: Zubeen Garg. The man who would go on to gain a cult following was named after the conductor Zubin Mehta, Zubeen banked on his popularity to revive traditional Assamese folk and devotional songs. Suddenly, it became cool for Assamese youth to play devotional songs in their living rooms! But did he make it in Bollywood?

Yes, with one song (Ya Ali from the movie Gangster) that earned him accolades from Lata Mangeshkar.

But the manic pace of Mumbai caught up with him and threatened to break the spirit of this maverick. Zubeen returned to Assam whose people and stories had inspired him to create classics. But his return left many with a sense of frustration as they believed a rare talent like his needed to be appreciated by the wider world.

Luckily though, a certain Angarag ‘Papon’ Mahanta emerged, making sure the hopes of every Assamese to see one of their own in the world of Bollywood music didn’t go up in flames.

Born to acclaimed Assamese folk singers, Papon’s soulful voice has tugged at the heartstrings of every music lover across the country.

“I feel lucky in Bollywood that I have been picked for special songs by the music directors,” Papon once told me during an interview.

“I sang Kaun Mera for South Indian legend MM Kreem for the Bollywood movie Special 26. After recording the song, he wanted to take my picture and said all the people in his family love my voice.”

And they certainly love him in Assam where he gets mobbed anywhere he walks.

Now my friends in Assam have more reasons to celebrate. Two gifted musicians — Joi Barua and Anurag Saikia — have created an impact with their compositions.

And Anurag hasn’t stopped receiving messages from the industry heavyweights after songs in the films Karwaan and Mulk proved his versatility.

From assisting top composers like Pritam to having great vocalists like Shafqat Amanat Ali sing his creations, it has been an unforgettable journey for the boy from a town called Moran.

But this unabashed Zubeen Garg fan refuses to look too far ahead.

A national award winner, Anurag even warns aspiring Assamese musicians against coming to Mumbai with money in their pocket.

These young musicians, Anurag says, won’t have the heart for the battle of survival if they come to Mumbai with money to spend.

“Only an empty stomach keeps the fire burning,” he says.

The youngster also hopes to bring the flavours of Assamese music into his work in Mumbai someday.

So did he like how Joi blended Assamese rhythm with Kashmiri folk for Laila Majnu’s title song — O Meri Laila?

“Yes, beautiful. Joi da is an unbelievably talented composer. He has got so much to offer to Bollywood if he gets the right projects,” Anurag tells me.

Joi though spoke about his rock-influenced Assamese cult songs when I asked him about his future Bollywood projects.

“I want to work with something that excites me. Music is a spiritual existence for me. I will never compromise on that,” he says.

My respect for Joi grew manifold.

Yes, the voices of Assamese artists need to be heard by a wider world. But these voices that have stirred souls of our land, can so easily become prisoners of public expectations.