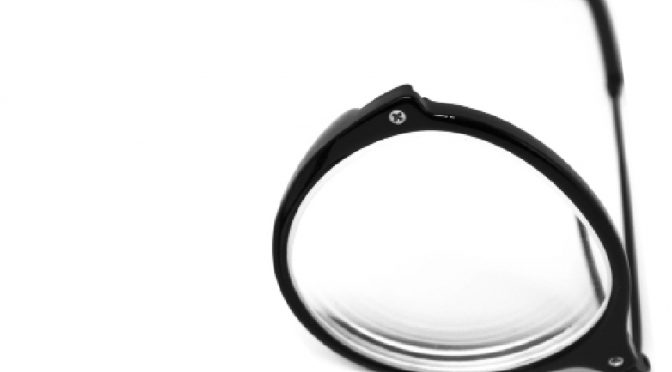 Shades in office, pray tell?” My colleague broached the question to me earlier this week. I was at my desk donning a pair of sunglasses. The office was well lit, so the curiosity was warranted.

Pulling another pair of reading glasses out of my bag, I thrust them in her face, pointing to the obvious lack of an arm on the left side, which rendered them useless. They met their demise just a day before. While I was trying to nudge a loose bumper in my car back into place with my hip, the glasses fell from my face and landed on the floor; one arm detaching from the frame.

My prescription sunglasses have been my surrogate eyes ever since. And it’s not the first time my carelessness has forced me to wear shades inside the office.

I’ve bid adieu to four pairs of glasses in the last 15 months; two lost, two broken. The most recent pair lasted eight months; quite a feat given my track record. Another lasted just six weeks. Not so impressive.

See, I’m notorious for being reckless with things. Growing up, I nicknamed my brother ‘Cautious Colin’. It was my way of poking fun at his obsession with being organised, and how he kept things in order. I still call him that today.

Whenever we used to go on holiday as kids, he’d always come into my room and check if  the windows were closed and all electrical sockets were turned off, like I wasn’t capable of exercising some thoroughness of my own (to be fair, he was right)! Even today, in his own place, his DVDs are alphabetised; his device charger wires are neatly lined up on the shelf. He’s precise and meticulous.

Now me on the other hand, I’m the complete opposite. Well known for being the careless one in my family, it’s a habit that has forced me to always buy cheap stuff. If it breaks, tears, rips (because no doubt it will), it’s no biggie. That’s the attitude I roll with.

If I did dig a little deeper and fork out a little extra for quality though, would I subconsciously force myself to take more care of stuff? Probably.

While on a shopping trip with my father and brother during a visit to the UK back in February, their willingness to hand over fairly hefty sums of cash for various items baffled me – £70 (Dh370) for a plain tee-shirt; £300 (Dh1,500) for a pair of glasses. I could have filled a trolley with the money they spent on just two items. Quality lasts though, my brother said, especially when you take care of it. I guess he is right.

My throwaway attitude to everyday items does need to change. Monetarily, I’m sure I’ll reap the rewards of being less reckless later down the line. But research suggests there’s a plethora of health benefits to looking after your stuff too as it can have a positive impact in areas of your life that are out of your control.

Apparently, being disorganised can prevent a natural decline in cortisol, a hormone released in response to stress. And this can affect mood and sleep dramatically.

So how can people like me make a change? Looking more into the issue online, I gathered some interesting notes put together by a host of health experts; psychologists, neuropsychologis, mindfulness coaches, you know the ones.

One overriding point that stood out for me was this encouragement to invest wisely. “The more you invest emotions in an object, the less likely you are to lose or break it,” one guy said.

Now, that investment of emotion could be because of the object’s monetary value or sentimental value, but basically, when something is given any kind of value, we as humans tend to take a more proactive approach to being careful with it.

Get organised was the next point; a quality I am severely lacking in!

“It’s easier to stop forgetting things when you are not relying purely on your memory”, another ‘expert’ claimed. By keeping the same objects in the same place, you’ll project the action of caring. And when you care for something, you’re less likely to lose it or break it. Easy peasy!

I noticed that each point created a snowball effect. If you give something value, you’re forced to become more organised, and being more organised creates less havoc in your life. Things don’t missing; glasses don’t go missing. Interestingly, several psychologists also made mention to the state of mind a person is in when that set of keys, say, mysteriously goes missing. And apparently, low or stressful moods can trigger this kind of behaviour.

That made sense. During my latest episode with my glasses, I was hurriedly trying to nudge a loose car bumper back into place on the side of the road with cars whizzing by. I was already late for a work assignment. The pair I lost went missing on the day I was due to fly back to the UK. I packed last minute and stress levels were clearly high, hence my failure to find them.

Delving into the issues surrounding careless behaviour has been an eye opener for me. By simply practicing a bit of due care with my stuff, I wonder if things will change in my daily life? Will it create less stress, more calm? The findings seem to suggest so, and I’m keen to find out.

This attitude that I have of buying cheap therefore not needing to care, is quickly argued in the next sentence: “Compare the two minutes here or there spent doing maintenance to the time you’d have to invest buying a new unit early – research, shopping around, and so on -– and the time begins to balance out.” And on reflection, it’s true.

While maintenance may cost, the cost of poor maintenance is even higher – both in terms of your wallet and health – so maybe it’s time I jump on the ‘Cautious Colin’ bandwagon and see how life changes for the better.