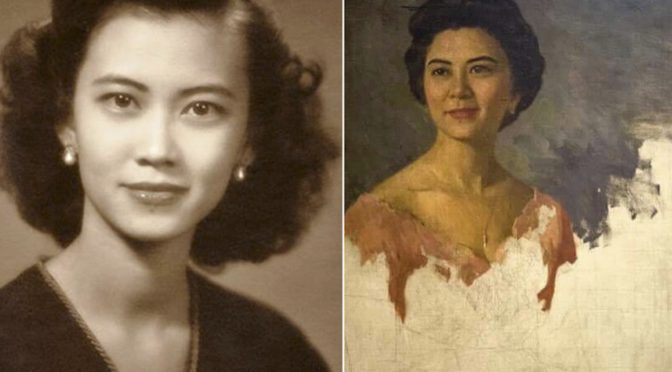 “There’s something poetic about a painter who dies before finishing his piece,” I told my colleagues while talking about a recent discovery made by the National Museum in the Philippines. An unknown sitter for the celebrated Filipino artist Fernando Amorsolo’s last portrait was finally identified. And it took them 44 years to discover this.

For starters, Amorsolo is one of the most important artists in the country. He was known for his works that depicted rural landscapes as well as his portraits. According to the National Commission for Culture and Arts, Amorsolo’s work is defined by his use of light. He is credited with introducing Chiaroscuro (use of strong contrasts in painting). His work spans the breadth of Philippines’ history – from the Spanish era, World War II and beyond.

Amorsolo passed away on April 24, 1972, and was posthumously awarded the Order of National Artists just four days after his death, and he was the first to receive this award. It is the highest state honour conferred by the President of the Philippines to individuals who have made significant contributions to the development of art in the country.

After Amorsolo’s death, his widow Maria del Carmen, donated a huge chunk of his work to the National Museum, including his studio furniture, drawings, studies and some memorabilia. The museum now has an entire area dedicated to Amorsolo’s work and among them is his last unfinished commission.

I remember seeing this portrait when I was in Manila. Unlike the rest of the displays, this painting was on an easel surrounded by Amorsolo’s brushes and paint tubes (which have now dried up).  The entire display is on a wooden pedestal which was taken from his residence. The display gives off a faint synthetic smell which emanates from Amorsolo’s work table.

When you look at the painting, it’s not hard to imagine how the painter immortalized his sitter on a blank canvas. The portrait gives one the feeling of being in the clouds. Light comes forth from the background as streaks of blue spread around the canvas.

The lady sitter has a slight smile, and her happiness can be identified from the liveliness of her pink dress. I remember examining the painting for hours and simply being awestruck at how the unfinished strokes blended well with the work that was already on it. The description card on the painting indicates that it’s Amorsolo’s last commission, the one he couldn’t finish. However, after I finished examining the portrait, I thought to myself, this is the most beautiful woman I had ever seen on canvas but I didn’t know her name. I felt both sad and happy to have seen her image immortalised by the grandmaster.

However, things changed last week. On their Facebook handle, the National Museum of the Philippines, announced that they had confirmed the identity of the lady in the portrait. And after 44 years of remaining unknown, the museum had finally discovered the identity of  the woman. It was Florencia Singson Gonzalez-Belo, the late mother of celebrity dermatologist Dr Vicki Belo.

On the online post, the museum explained how they managed to uncover her identity. “In March 2016, as we were preparing for the donation of a statue by Guillermo Tolentino from the President Manuel Roxas Foundation, we gave Mrs Judy Araneta Roxas a tour around the National Museum of Fine Arts. She pointed out that the last portrait of Amorsolo was ‘Nena’ Belo.” [sic]

The museum then sought out the Belo family to verify facts, a process that took over two years. Once that was done, Dr Vicki visited the National Museum and saw her mum’s long-lost Amorsolo portrait. Apparently, all her aunts had portraits done by Amorsolo, she revealed on her Instagram post. “When I asked her (Nena) why she didn’t have her portrait done, she said that she had posed for it but didn’t know what happened to it,” Belo wrote on Instagram.

Later, the museum shared photos on their Facebook post, including some of Dr Belo’s family viewing the portrait and photos. However, there was one particular photo that caught my eye. Unlike the coloured photos, it was the one in sepia. The one that had a woman whose faint smile and bright eyes shone through the screen — it was Florencia Belo’s. And be it painting or a photograph, I stand by what I said — she was the most beautiful woman I’ve ever seen on canvas.