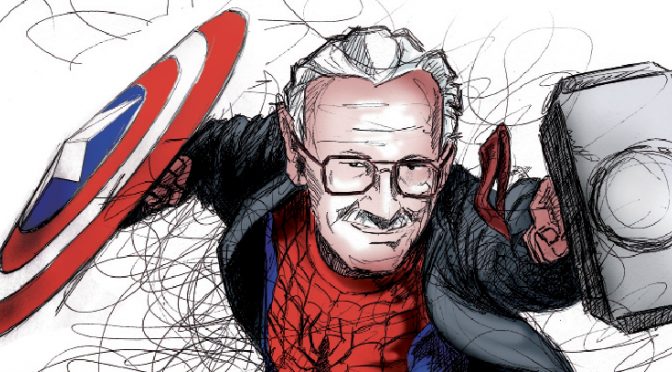 There are many people that you think  or you end up hoping will live forever; Stan Lee was definitely one of them. Ask any fan, myself included, if they have a list of people they would hope to meet at the Comic-Con convention, and chances are that Stan Lee’s name would be first on that list. Stan ‘The Man’ Lee, the Marvel icon who died on Monday at age 95, was in many ways larger than life, and his passion for what he did never seemed to fade.

Watching as the tributes continued to pour in on social media from celebrities, artists, and all the people that he worked with, it was hard to keep the emotions at bay. For many people in the fandom, Lee was much more than a short cameo in a beloved film. The rebranding that saw Marvel officially come into being in 1961 provided Lee, along with Jack Kirby and Steve Ditko, with the platform where they brought several iconic superheroes to life. Characters like Spider-Man, The Hulk, Thor, Black Panther, X-Men, and the Fantastic Four would all go on to inspire and delight generations of fans.

In many of his interviews during the growing heights of the Marvel Cinematic Universe, he never failed to mention how much he loved his fans; and how he could never have imagined, when he first began writing for comic magazines (in the 1940s), the impact it would have. In addition to his humble nature and almost boundless enthusiasm, another reason why he was so incredibly dear to fans was because of his decision to actively highlight issues such as racism, and push for greater inclusivity in the industry.

Watching him talk about the power of imagination, and how there could be a superhero in all of us, I was always struck by how much his words mirrored what my dad used to say to me as a little girl. Growing up with a congenital deformity that left me with no fingers on my left hand, I would always complain about being different. My dad would hold both my hands and say that what I lacked in five fingers, I more than made up for in sheer punching power. That made me feel like a superhero; and, as I grew older, I realised that this was exactly the point that Lee was making. Today, you have complex characters like Matt Murdock (aka Daredevil) on the big screen, who are excellent examples of overcoming the odds.

When I look back at his countless movie cameos, it’s hard to pick an all-time favourite – there is the delivery guy, the security guard, and the hairdresser that cut Thor’s hair (nothing less than a legend could have touched those luscious golden locks). However, my favourite cameo will always be his turn as the librarian in The Amazing Spider-Man. The scene plays out with Lee wearing a large pair of noise-cancelling headphones and enjoying a classical music piece, while Spider-Man is engaged in a heated battle with the Lizard right behind him. He scans a book, sways his hands in time to the music, grabs his lunch and walks out, completely oblivious to the fact that Spider-Man snagged a table right before it could hit him.

Re-watching that scene now is bittersweet, and I can’t help saying, “upward and onward to greater glory, Excelsior!”

Rohma has always been #TeamCap but admits that everyone deserves to have their very own J.A.R.V.I.S