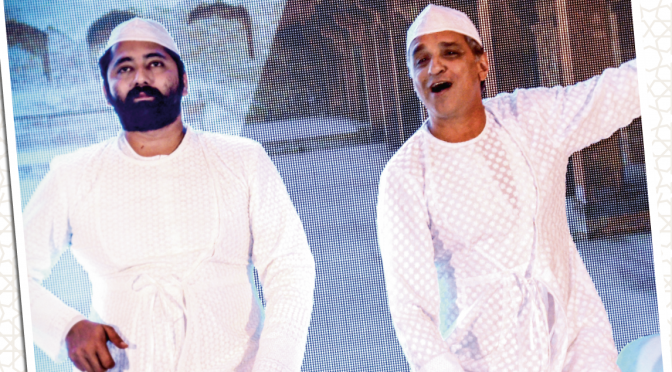 Who was it who said that a good story is one that holds a mirror to our collective conscience? That may provide an inroad into the world of dastangoi. An ancient storytelling form in Urdu, it has lately acquired a niche for its incisive takes on society and politics. Be it sedition or Partition, performers have taken on inconvenient truths of our time and made them more accessible to a wider audience.

This Saturday, Sunil Mehra and Askari Naqvi will revisit two of Ismat Chughtai’s stories Amar Bail and Mughal Bachcha and narrate them in contemporary light. In a conversation with Khaleej Times, Sunil, an author and a senior journalist, and Askari, a human rights lawyer, tell us why dissent is at the heart of modern renditions of dastans.

Sunil, you have been a journalist and a yoga instructor. How did you come to be an oral storyteller?

SM: I was raised at a time when languages did not have a religion. In those days, most kids were brought up being multi-lingual. At my home, the only principle was, speak any language but speak it fluently. The idea was to keep your speech chaste and enunciate clearly. In dastangoi, language is the actor. So, all the things that I do and my inherent love for language culminates into dastangoi!

Being a human rights lawyer, what drew you towards this art form?

AN: I was born in a family where the culture of conversations and storytelling was very important. So, it was in my blood. But looking back, I also feel I took these things for granted. For instance, if you live and grow up near a historical monument, you don’t realise its importance. But when people from all over the world come to visit it, you begin to look at it differently. When I became a lawyer, a col-league told me that I possessed some very important skills to be a performing artist. I took the leap of faith two years ago, left law, and began doing this on a full-time basis.

SM: For this performance, we have chosen Amar Bail and Mughal Bachcha, which are particularly important stories for the kind of comment they make on society, class, gender and relationship between the two sexes. What makes Chughtai interesting for us is that she was very radical at a very conservative time. In 1950s, she was charged with obscenity. She was forbidden in upper class drawing rooms because there was a fear that she would corrupt young minds. She gave women sexual agency, which, to the society of that time, was subversive. Unfortunately, in the 21st century India, times have not changed very radically. We still have groups that undermine women’s rights.

AN: When the subject itself is so powerful, it’s not difficult to enter those worlds. People often say, ‘Oh look at these men narrating feminist stories.’ At one level, it is important for us to do so. At another level, there is a challenge to it. For instance, while performing Gharwali, if we have to narrate a line suggesting the man beat up the woman mercilessly, we have to do so in a way that is distant and is not read as being condoning of that act. The tonality and narration have to be careful.

Dastangoi started as an oral storytelling tradition in the 13th century and the stories were fantasies. Today, they have taken a more political tone. Why has dissent become such an important part of dastangoi?

SM: Dissent is the very foundation of dastangoi. It’s an attempt to create alternative space for art. As a performer, ostensibly, I am making them laugh or cry, but actually I am launching a protest, holding a mirror to what should not be.

How do audiences receive this protest?

SM: The audiences have been amazing. They have laughed with us, they have cried with us. The larger problem is that we have stopped listening; we prefer our gaze being fixed at computer screens. We underestimate the power of words. Dastangoi harks back to our roots. It taps into people’s second memory. It reminds you of a time when you slept under the stars in summer, it reminds you of another place, another time. It evokes nostalgia. There’s something about dastans and the characters narrated in them that connects with people.

AN: Sometimes, the stories themselves are political, so naturally that stands out. Recently, performers have picked themes like Partition and sedition and woven dastans around them. In a way, taking it out of the classical format has helped because you can now tweak it to address important issues of our time.

How important is the internal coordination between the two performers?

SM: Very important. When I was looking for a co-performer, I knew exactly what I wanted, and what I didn’t. I didn’t just want someone who knew Urdu, I wanted someone who lived Urdu. Askari was God’s own answer to me because he comes from that environment. He hails from Pratapgarh, which is just outside Lucknow. His understanding and language are reflexive, which is so important in a form like this.

AN: Whether it’s dastangoi or playback singing or theatre, internal coordination is always important. What helps is that Sunil and I have many things in common, our sense of humour is very similar and we are familiar with the cultural milieu in which these art forms developed. But, most importantly, we have a nostalgia for the language itself.

We live in times of instant gratification when everything is at our fingertips. Has that made us less ‘political’?

AN: Perhaps we have. You see, there is an entire process in India that is attempting to disengage you from politics. Switch on television and you will see content that will draw you further away from the reality on ground. Or there is disillusionment that is taking you further away from wearing your politics on your sleeve.

SM: What happens is we retreat into our own comfort zones. The biggest metaphor for that, to me, is living in gated communities, where you have perfect life in perfect order. We live in islands of our own and pretend that the outside world doesn’t exist. The tutor who comes to teach your kid and goes back to his miserable one-bedroom apartment where there is no water or electricity, his discontent will visit you. Everything can be political — whether you eat meat or not is a political choice. It’s not as though we are less political, it’s just that we have lulled ourselves into complacency.

Mehra and Naqvi will perform at The Junction, Alserkal Avenue on November 24. Show timings are 5pm and 8pm.