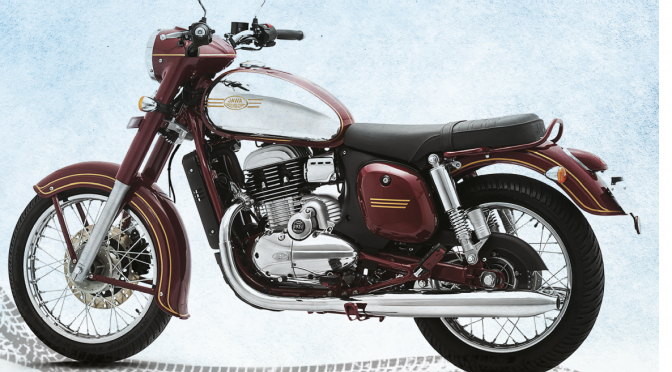 What happens when nostalgia comes riding on a motorbike? I would succumb to the sheer emotion, the joy on wheels, the pleasure of the ride. So when a legendary bike named Jawa was relaunched last week in India, the occasion kick-started some feelings in me and off I went to share my excitement with those who experienced it, like I did in my boyhood. I didn’t have to go far as our sports editor in the newsroom cheerfully said he owned one during his stint as a rookie reporter during his salad days in Bombay, or Mumbai, in circa 1979.

I must have been five then. We exchanged notes about our common biking legacy. I narrated my experiences with the stunning Jawa machines my dad owned. The sports editor said he had painted his bike black… “black-board black,” he said for effect. He had removed the mufflers from the twin exhaust pipes. Very creative, I thought. “I used a brush to paint the bike… did it on my own. The bike boomed. People would notice, man, when I rode into town,” he reminisced.

“You could shove down a stick into the ignition and start the thing… no problem… if you lost the key.”

I soon gathered my thoughts, my creativity flowing and the world looked a better place to go places — on a motorcycle. Memories like these make me more human and transport me, albeit briefly from outside my virtual walls. I could sense fresh vibes from the Jawa, and it seemed like yesterday as I watched the unveiling of the latest versions, two decades after they went off the production line in India. Here it was in a new avatar, and thanks to social media, the launch ceremony was streamed live last weekend. I spent the whole morning glued to the event on Facebook. Same lines, same chrome, same curves, better engine, I observed. The original was fitted with a two-stroke engine, the latest models came with more contemporary four-stroke engines. The ad was brilliant, too. My heart went aflutter as I heard a gentle throbbing sound in the back-ground in the video. It looked like a winner, again.

For me, the road looked cheerful and inviting. I had missed the riding experience all these years when I gave up bikes for the comfort of cars. The balance seemed lost then, the future uncertain, but I managed to scramble to where I am now with no serious damage to the body though I am not sure how the experiences affected my psyche.

I like where this writing is taking me — about the Jawa. I first saw the machine some decades ago when I couldn’t pronounce Czechoslovakia, forget spelling the name of the erstwhile Soviet bloc country from where it originated from. Czechoslovakia later split into the Czech Republic and Slovakia in 1993. But before it was divided, the country’s biggest export was the Jawa motorcyle — or arguably Ivan Lendl or Martina Navratilova — if you are a tennis fan. The Jawa was dour but stately like those tennis stars — a player of repute on Indian roads in the sixties, seventies and eighties when it was manufactured by a company named Ideal Jawa from the sleepy cultural but industrious town of Mysore in Karnataka state.

I have a faint memory of my dad owning a gleaming Jawa, a 250cc bike. I’ve seen pictures of him astride the machine. He sported sidelocks so reminiscent of the sinful seventies and liked being one with the bike — all suave and macho.

The early Indian Jawa was later tweaked into a sportier version called the Yezdi which was also owned by my dad. He never parted with it, but simply “lost it” to one of my cousins who painted it an ugly green from the original bottle green and rode away in 2003. My dad took consolation in the fact that the bike remained in the family though he has no clue where it is now. He likes hoarding things, and our house is filled with stuff from over a century ago. My mom can’t stop complaining about his passion to never let go. Perhaps he thought the bike to be his legacy, one that would stand the test of time. I could understand his emotions. I share it, too.

I remember the day he rode the brand new Yezdi home to Bangalore from the Ideal Jawa factory in Mysore. It was a nippy morning. The year: 1979. The machine was beaming in chrome, resplendent with a marigold garland on its neck. A puja (a Hindu ritual) had been performed for luck. The registration number read: MEM, 6093. I recently asked my dad how much he paid for the iconic machines. “Rs6,500, and Rs2,500 for the older Jawa,” he said with pride and amazed me by his memory.

We went places on the bike — dad, mom and I. The tank was a nice place to sit for me, a five-year-old then. “Keep your legs away from the hot engine,” my dad would warn me. On the weekends, he would polish the bike, or have it checked by a mechanic named Andrews, who spoke through cigarette smoke as he cleaned the carburettor and checked the oil flow.

The Jawa, or Yezdi as it was called, travelled with us to new destinations. It was tough to ride, unreliable for the most part and threw some kick-starting tantrums.

The kickstarter was on the left and also served as a gear. My family criss-crossed four states, the bike being a constant in our lives. It had pride of place in our front yard in the many homes we lived in, next to our cars which kept changing every other year. For my dad it served as a symbol from where we started the journey. I learnt the right balance on the bike in my teens. We later fought for rides, my brother and I.

Dad by then had grown to simply admire the classic two-wheeler, and would point to an injury on the shin he suffered when the kick-starter recoiled and hit him. Six stitches fixed the damage. Life happened, we moved on and the parents settled in Kochi, Kerala some years ago. After the relaunch of the Jawa last week, I had an idea and messaged my dad if he wanted a new bike. “You don’t expect me to do that seventies thing again, do you?,” he might have wanted to say, but checked himself and said: “I don’t think it’s out in Kochi. I don’t see it around.”

“You do online booking these days,” I replied. My brother messaged me and said he wanted to buy one, too — for old time’s sake. “I’ll book online, we will split the money for the classic Jawa. We’ll ride it when we visit the folks,” I told him. I thought he said ‘yes’ but I’m waiting for his confirmation when he visits Dubai this week.

My thoughts were interrupted by the sports editor. “It’s gone viral… the Jawa, everyone’s talking about the bike, man,” he said. I know, I told him. It’s a glorious comeback. That’s what legends are made of. They nurture emotions and connect generations.