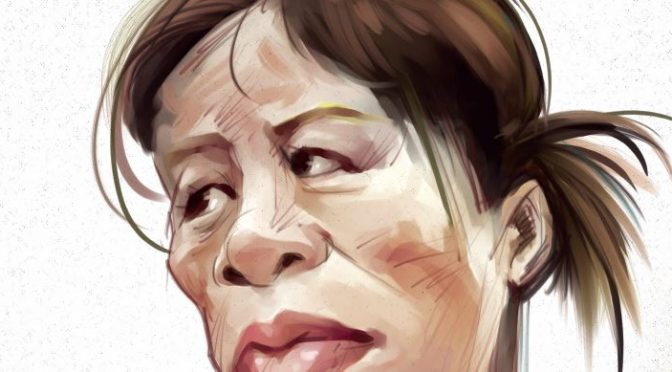 A bout of anger or sadness has gripped me. I cannot fathom what it is and why I am being shackled by these emotions. I’d like to get into a contest to find out. A punch up would settle it — I mean like watching a boxing bout featuring World Champion Mary Kom who recently won her sixth title, a record she shares with Cuban Felix Savon, a former champion in the men’s event.But before I do that, let me ease the pressure by blaming cricket that’s taking the sheen off Mary’s achievements — a game that has become a pestilence of sorts for grabbing screen time and killing the attention span of fans, at least in this part of the world.

Cricket faithfuls are crawling all over the place. They fail to look beyond their corners. Maybe, I am just boxed in and bored that I am going back to one of my debut beats as a sports feature writer when I covered some national boxing championships back in India that included a juniors event (if that qualifies me to write this piece).

I thought I knew it all then, but now I realise that I’ve lost touch with boxing and its rising stars who can sock any sport with their accomplishments. I’ve watched some fights starring Manny Pacquiao simply to join in the chants and avoid the ignominy of being left out of the action. Manny had the right technique, attitude and balance till he was floored by politics in the Philippines. I drifted away from the heavyweights long ago, after Mike Tyson bit into Evander Holyfield’s ear. Besides, heavyweight professional matches were ‘heavy’, which meant they were slower than the lighter categories.

But when Mary Kom appeared out of the blue to grab her sixth world title last week, I was elated to experience boxing again. I say experience because it’s more than a sport as you get a ringside view of life. I didn’t watch her contests at the championships in Delhi, but read about them online and on sports pages in different dailies. Yet something rankled inside me. I thought the lady deserved more. So I mailed a colleague if he could pen something on her, but changed my mind and decided to do the piece myself.

I realise that boxing is better than launching a tirade against cricket where there’s scarce emotional investment with the surfeit of T20 and T10 games. Add one-dayers and Tests to the list for a packed calendar, and there’s little energy left for the spectator. So I decided to stage a lonely walk outside the ring, online, and stay there. Watching some jabs, upper-cuts and feints can be exciting. There’s this rush of adrenaline as I aspire to reach that elevated state of fitness. This is pure art if one has an innate passion for it and I see that in Mary Kom, the consummate practitioner, a livewire in the ring, who dances, ducks and dodges with such spirit. She breathes the sport of life in her movements.

For me, cricket has lost meaning with the entertaining, ‘mad’-for-television routine. I often hear myself complain how the game takes people for a ride and find myself engaged in meaningless debates with some friends from school — on cricket, of course! I like telling them that the Indian team are tigers at home and lambs abroad which riles them no end. I rib them more and I get the feeling that I am the irritator-in-chief . In fact, the moniker sits nicely on me.

To their credit, the old boys clique check themselves when talking to me while I give free vent to my feelings. They’re are nice guys. I mean it. Politically correct and tolerant, too, but what irritates me is that they are talking about women’s cricket and stars like Mithali Raj these days. The former India women’s cricket captain has been at the receiving end of some shoddy treatment from the game’s mandarins. She’s been left out of the squad for reasons best known to them. I don’t care much about Mithali, but I do about Mary.

There’s something about the way Mary boxes that inspires —  the lightning fists, silver reflexes and ability to quickly get out the way of a punch thrown at her. She’s nimble, crafty and brilliant at conserving her energy during a bout, the key reason for her successful run at the worlds. “There cannot be another Mary Kom,” she says, dropping any hint of modesty. The lady from the Manipur state in India is 36 and has won a host of awards. She can be credited for bringing women’s boxing centrestage in India. A true legend.

The fans adore her, the country salutes here. She has been nominated to the upper house of India’s parliament, the Rajya Sabha; even Bollywood glamorised here in a movie that starred Priyanka Chopra. I watched clips of the flick as I couldn’t sit through the whole movie. PC as Mary managed to land some okay lines, but clearly lacked the spunk for the ring like the legend.

Back to the real Mary, her counter-punches can be devastating. The opponent flails and falls into her trap, lured to the centre of the ring, where she lies waiting to unleash a flurry of punches. She can be an opportunist with an array of surprises in the ring. I remember her fight against Britain’s Nicola Adams, which she lost. We in the newsroom were rooting for Mary even in defeat. She had to settle for bronze in 2012 at the London Olympics, but that shock loss only made her stronger, her confidence improved and she went to win four more world golds in the 48kg light-flyweight category. She’s bobbed and weaved past her obstacles since while keeping her feet firmly planted on the ground.

Olympic gold remains a dream for the mother of three and she has a chance to realise it in Tokyo in 2020.

Mary will need to gain weight which could slow her down in the 51kg category. The Manipuri’s fighting style resembles ‘Iron Mike’, and she makes up for her short height with superior reflexes, tact, energy and swift fists to befuddle her foes.

Magnificent Mary deserves credit for redefining the sporting culture in India. Her influence has spread beyond the ring as she sparks a revolution in a country where gender inequality is still rife. More power to her and may she pack a bigger punch for all humankind.