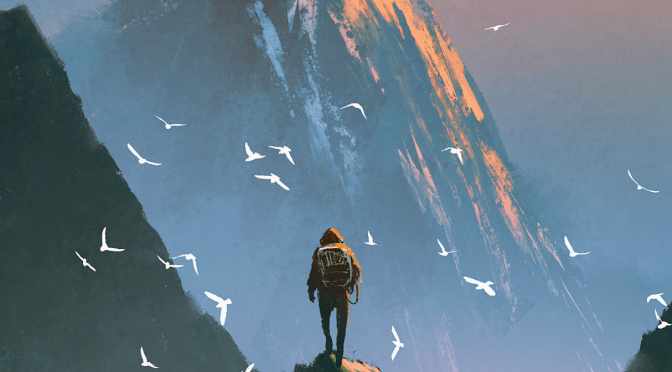 Novelist Gustave Flaubert’s musings on travel, for me, epitomise why casting your gaze on new horizons is vital. In his 1849 memoir detailing a classical sojourn in Egypt*, the French author penned the inspired line: “Travelling makes one modest — you see what a tiny place you occupy in the world.” ‘Here, here’. If witnessing the majesty of the Himalayas, attempting to process the natural azure of a Pacific atoll, or fathoming the ancient achievements of Petra’s fourth century BC Nabatean civilisation doesn’t give you a kick in the humbles, nothing shall.

Unfortunately, it appears, almost 170 years after Flaubert wrote his piece, the sentiment has very much been consigned to the annals of history. Like hearing an American president utter the words, “The measure of the restoration lies in the extent to which we apply social values more noble than mere monetary profit,” (as Franklin Delano Roosevelt did in 1933) now feels like an address from another dimension, the idea that anyone believes observing and integrating into a foreign culture during an expedition is a more important objective than self promotion is equally distant.

Humility and moral advancement be hanged! Celebrity is today’s premium and voyagers are going to make sure you know they are having a ruddy good time whilst not so subtly putting forward they occupy a greater part of the world than you and those they encounter.

I don’t want to lay the blame solely at social media’s door, but it is difficult to deny as soon as people started turning their cameras’ focus away from views and onto their own faces to create posts, the narrative shifted.

Of course, holiday photography is nothing new. The subjection of relatives to an extended slideshow of your Wellington-booted tour through the coal pits of north Wales is a rite of passage. Though, in order to impress anonymous followers in return for likes that are oh so crucial, snapping pics has essentially morphed into frenzied brand building.

So you better get to it! How about a dozen or so close-ups of your mug in various states of ecstasy on what could be a beach in Unawatuna, or Santorini, or…it doesn’t really matter, does it? Hey, why not add an ‘inspirational’ quote that means nothing? That’ll get them sharing. Something within the realm of: “my heart may be on the left, but being here makes it feel right.” If only we could all be #Blessed with such wit.

It could be argued travel companies and tourist hotspots are not doing themselves any favours. Properties and sites are constantly promoting their “Insta-worthiness” in an attempt to draw in the crowd for whom this criterion is increasingly essential. Both target and target audience are missing the point. The gift of travel is surely the endowment of experience, not having the opportunity for discovery sail by as you take a million selfies. I’m not quibbling with souvenir snapshots. It is in a tourist’s nature to document. No, it’s the full-scale, million-take photo shoots where the place or its people are not even the subject. You’ve seen the ones. The same pose is simulated in an insufferable Groundhog Day-like prison of repetition, if not for the person in the frame, at least for the potential long-suffering lackey holding the camera. And what is the result? Gauche attempts at intoning how much has been learnt from a visit when the serial poster hasn’t looked away from a lens for more than 45 seconds.

A comparison we find to be apt in these situations is the friend at what they volunteer (unsolicited) is the best party they have ever attended and messages through the night to impart as much. If they have time to do so, like the wannabe celebs on social channels may stream endless stories, they’re probably not getting as much out of it as they claim. So what is the answer? Will the inexorable rise of the ‘Gram-trotters’ halt? Of course not. Will it get worse before it gets better? Probably. Will it bottom out… eventually.

Everything must. Oddly enough, a quick sketch from Comedy Central Arabia’s Bad Snappers recently lifted my spirits. In it, the two leads, frustrated by their friends’ pictures from abroad, decide to mock-up a fake vacation in their garden for the benefit of their feeds’ subscribers. Staple scenarios including ‘feet in the sand’, ‘shoulder-deep in pool’ and ‘looking out at a sunset’ were achieved using kids’ playground equipment, a bath-tub and a cunningly positioned poster. While it doesn’t signal the end of the holiday boasters, the fact they are being parodied by peers knowingly nodding to the artifice behind such output is a step in the right direction. With any luck one day, egos kept in better check, we may ignore the constant desire for nameless approval, look up and once again begin discovering just how small we all are.

David is an avid traveller, given a chance he’s off