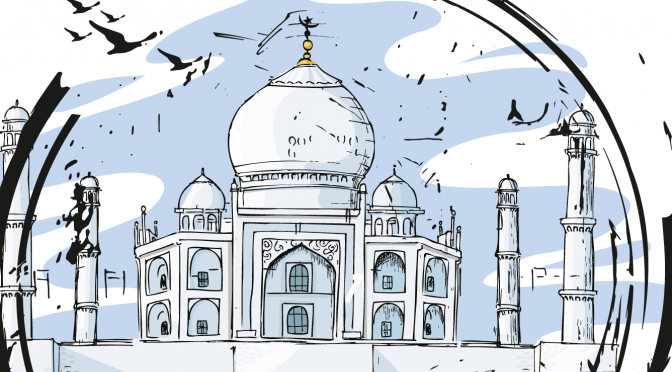 At the outset, let me confess: I have not seen the Taj Mahal for real. Nor do I desire to anytime soon. A crime it is. A romantic crime. There is no need to traverse thousands of kilometres to stand in front of one of the universally admired masterpieces of world heritage and say ‘Wah Taj’. Because for me the Taj is metaphysical. Because there is a Taj in my neighbourhood, not so grandiose as the real one but as poignant as the Mughal legend.

The Taj I’m talking about never occurred to me as the concept it conjures up, until its Shah Jahan and Mumtaz Mahal passed away. They were my aunt and uncle. She was a craft teacher, and he an insurance agent who later became an automobile executive. He was tall, well-built and handsome. A macho man wearing black-framed specs. She was beautiful but diminutive, her springy locks adding a dash of ingeniousness and classical aesthetics.

He walked the whole six yards ahead of her, swinging his umbrella rhythmically, leaving behind the impression of a hardcore patriarchist, which he wasn’t. He was a humanist, a coffee shop political analyst, and moreover, an Indira Gandhi hater. Having spent his salad days in Bombay and well trained in ethics, he knew when and where to draw a line while dealing with women.

His voice carried the power of a dozen Sam Manekshaws which camouflaged his kind heart. Not a romantic heart, but a noble, humane one. Whenever my father sent me to their place to borrow some cash, husband and wife would disappear behind their bedroom door and return in a couple of minutes with the requested money; of course, wrapped in a benevolent smile.

During school holidays he would invite me to sleep over so that he could have an absorbing one-man audience for his political lecture. He would talk about Mrs Gandhi, Mrs Thatcher, Reagan, Brezhnev, Mao Zedong et al. He would curse the autocrats and the corrupt — in between throwing some queries about my standing in the party.

“If you are thinking of a political career, for God’s sake, be an honest dealer,” he advised, rolling his eyes at his wife who would barge in to announce dinner was ready. He disliked being interrupted, so he rebuked his wife whenever she poked her nose or offered her two cents worth.

The “sweet” thing about the couple was they loved to fight, especially in the open — at birthday parties, weddings, funerals, and any family get-together. They were like the US and the Soviet Union in the cold war era, battle-ready with nukes deployed against each other. The fights weren’t spiteful in nature, though they were acrimonious at times. They just loved to oppose each other. They loved to reject each other’s views and comments. “You can never be right” was the attitude they both wore on their sleeves.

Having lived in a couple of rented homes, they finally built their dream house and gave their daughter in marriage. Their two sons were well employed as engineers — one in Kuwait and one in Mumbai — when tragedy struck. She suffered a stroke. Yet another one after a few months. The husband who fought a running battle when she was hale and hearty was devastated. He told his children, “If your mom dies, I will also go.”

She finally drowned in a maelstrom of health issues at a time when the rainbow of prosperity arched over their horizon. He felt cheated. The children took turns to come down on leave to take care of their father who had threatened to join his life partner in death. Besides, there were two live-in maids. And on a day when one of the sons went to town to start an endowment in his mother’s name and the maids were busy chatting up the fisherman, the old man found his way to his dead wife. He went to the terrace and hung himself from the guava tree he had planted and watered.

On my next leave, I visited the family. I was so overwhelmed by the realisation that the ever-fighting couple was so deeply entangled with each other. I walked around the huge compound which he had groomed like a Shangrila. The little dream home looked like a Taj Mahal, with willowy coconut trees jutting into the sky like emerald minarets. I ran my fingers on the wall to feel, what Rabindranath Tagore said, ‘the teardrop on the cheek of time’. I stepped into their bedroom — the sanctum sanctorum of their classified romance — and stood in the dark hoping to listen to all the merriment they had hidden from the world. Why did they wear a veil of virulence all through their life? When did they find time to love each other? What was so bonding that even death could not do them part?

Their enigmatic life’s an immense mausoleum of love. Unsaid love. That’s the Taj I have built in my thoughts. The Taj as an emotion is more overwhelming than the magnificent white marble monument that Mughal emperor Shah Jahan built in Agra in memory of his favourite wife Mumtaz Mahal.

Shah Jahan’s Taj Mahal is now under attack. The noblest of emotions that humanity shares is under siege. More dangerous than the debilitating effects of pollution and exposure to the elements are fascist forces that have threatened to rename it as a Hindu temple or obliterate it from the history of the land. Go knock it with the sledgehammer of hatred and intolerance; the Taj wouldn’t crumble. Because every human heart has a Taj Mahal in its backyard. Love will rise like a phoenix.