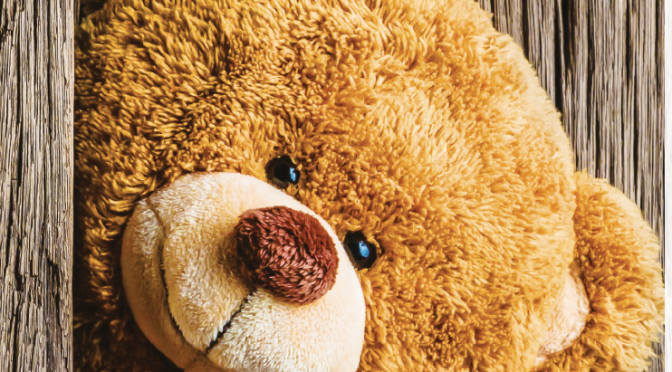 Recently, I received some really horrible news, one that turned my world upside down, bringing me to the point of catatonia and even almost booking a flight back home to Manila so I could personally confirm if what I had long been dreading secretly had become a reality.

My beloved teddy bear had been dispatched. I feel the chills just by writing that line. (Were you expecting something more tragic?)

The cuddly toy’s name was Gene — Gene the Genius Bear, to be precise. It was a gift to me from my mum’s office mates back in, if I remember correctly, 1988. It was a unique bear: pear-shaped with stubby feet, had black glasses and a ribbon on his chest and had each hand sewn front and back, giving the impression that he was about to do a bow, like one normally does after a sterling performance. Thus, the ‘genius’ tag.

Gene was kept in my son’s room, alongside his toys and the other surviving ones from my youth. But he would always stand outstanding proudly over the rest, as if saying, I came here before all of you did. Every time I went on annual leave, I’d always make it a point to cuddle him and play with him — even kiss him, like I often did back then. There was even a time when I put him in our car so he would continue his status as part of the family.

He was my alter-ego. As children, we all had our own world, and mine wasn’t any different; I’d talk to Gene as if he was an actual human. My mum was also in it for the fun; she’d do some equally crazy stuff like telling Gene to wake me up in the morning, and I’d open my eyes to see him tap-ping me, with my mum saying, “Hey kuya [big brother], time to wake up, you’ll be late for school!”

Naturally, I’d return the favour. I’d put Gene in hilarious situations, such as ‘trying’ to eat my mum’s favourite food, stage a situation in which he is about to cut up her clothes, or ‘threaten’ to kill my pet hamster, whom he was ‘jealous’ of.

That ‘genius’ tag, meanwhile, emanated from the fact that I had been doing quite well in school. Now, if we were playing and tried to show Gene doing dumb things, we’d tell him we’d be changing his name to ‘Bob the Bobo Bear’ (bobo, in Tagalog means, among other painful definitions, idiot). Gene would then ‘cry’ until he went back to his ‘normal’ self.

We even made a storyline out of it: my mum was given one of those large — really large — stuffed bears used by a certain milk brand. I remember that night: she came home and told me, “someone’s looking for you”. When I got downstairs, I saw the huge bear; it was Gene’s dad, who had been looking for him all this time. Bear and cub, reunited.

And his mum? Well, here’s the back story: Gene was separated from his parents when people raided Bear Forest. His mum was shot and killed, while his dad was fighting off those heartless humans, he was whisked away and sold as a toy.

I know… some wild imagination, huh? Well, that’s one episode of my childhood. I look back at it right now and find it really amusing. I find it even more interesting to know how I was able to come up with all that nonsense. And, yes, now that I am a father, I also have my own imaginary world with my only child. I can just imagine when he matures and looks back at all this rubbish I fed his mind.

Yet, as silly as it is, that’s how the cookie crumbles. As my son outgrew his furry toys over the years, it was time to let them go. Some were given away; others sold off in garage sales — the likes of Elmo and even Pikachu didn’t survive that. Ditto for my growing-up years and my own stuff. But Gene survived all that. Now that’s what you call a boss.

But, well, fate caught up with him; general house cleaning finally claimed him. To be fair to my mum — yes, she was the one who got rid of him; thanks a lot, mum — wear and tear finally caught up with my precious bear, who was beyond repair. I just wished she could’ve consulted me. Better yet, I could’ve done something if I was there.

More than 30 years after I first hugged Gene, he’s gone, just like that. This whole thing is a reminder to all of us: let those you treasure feel how much they mean to you.