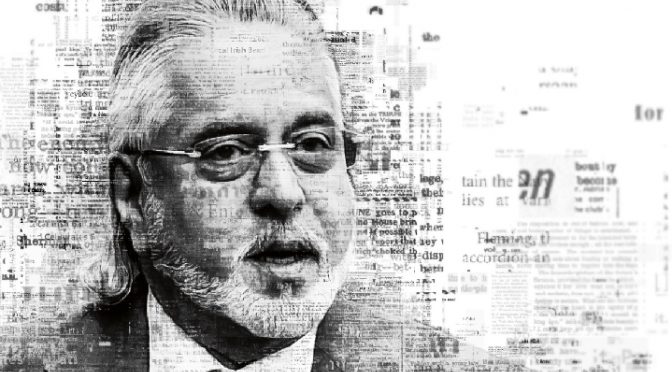 Striking a man when he is down is not my style in these divisive times when everything one says is dissected and damned. However, I find it hard to put a lid on the anger welling inside in me as Indian billionaires, or Bollygarchs, as author and journalist James Crabtree calls them, go unpunished and taunt the law from distant shores.

This lack of remorse and apology for their crimes, after gaming and milking the political system and business environment to their benefit; the open cronyism; the bludgeoning of ethics, makes my blood boil. All this is happening when ordinary men and women work hard and honestly for their daily bread, yet are struggling to make ends meet. What’s worse is they are persecuted (and prosecuted) for the crimes of a few with job losses and penury.

The masses continue to suffer in silence as they watch the political-business nexus unfold and prosper. They are helpless and can only throw up their hands in despair. They can do nothing about the situation as conglomerates with the right connections in government siphon money from banks in broad daylight and invest in high-flying companies that go bust. When the game’s up, these business leaders scoot, and battle extradition from London (where else?). I am trying hard to resist the urge to take a swing at former billionaires like Vijay Mallya, who still has the means and money to fight expensive court cases in places like London. Maybe I am a coward who didn’t have the courage to take on what Mallya and his billionaires club stood for in resurgent India when the going was good.

Maybe the Indian government and banks should just take his latest generous offer of a payout and let him go to close the chapter and end this tryst with hypocrisy.  ‘Take it’, he said in tweets just this week. And he’s still tweeting on those lines as I write this piece. His crime: defrauding banks of billions using his contacts and clout in former governments, and fleeing from justice in India after defaulting on payments. The former liquor baron is now battling extradition to his home country where he faces a battery of charges.

In his heyday, the former corporate czar even made it to the Indian parliament’s upper house, the Rajya Sabha. But troubles began when an aviation company he floated in 2003, Kingfisher Airlines, guzzled down his core alcohol business, United Breweries. So he went rogue, made a run on government banks with some help from political friends; borrowed heavily, couldn’t repay his debts, and slipped away to emerge in London.

To understand Mallya’s current bad times, it is important to go back in time when he took over the family booze business at 27 following the untimely demise of his father in the eighties. Mallya, the former playboy and motorsports diehard decided to become the ‘King of Good Times’. He was ambitious, and his youthful passion paid off handsomely as he carefully cultivated politicians and worked his way past India’s socialist red tape and sluggish bureaucracy in the eighties and early nineties. His liquor business soared soon after India opened up its economy in 1991 and started to look beyond what was known as the Hindu rate of growth that hovered around 1-2 per cent.

So the brave baron bought an F1 team, and threw wild parties that every A-list celebrity yearned to be invited to. The models trooped in, the booze flowed, the stars were shining over his brews. It was heady stuff and Mallya had his head in the clouds. India was shining, celebrating success with the rise of the new barons. Meanwhile, the ranks of the noveau rich swelled. Those who complained in the early 2000s were only those who were not invited by him. Others left behind were seething with envy as Mallya made every effort to flaunt his achievements. But the tide turned when his ambition got the better of him and he lost his instincts, and his family business to his flying passion.

I remember a flight on the now defunct carrier from Delhi from Dubai, and a connecting flight to Dehradun where my brother lived. It was an old 777 aircraft, I noticed, taken on lease. The air in the cabin smelt of beer, the hand-rests were grimy. The Kingfisher logo was unmissable.  Felt more like a bar than an aircraft cabin, I thought. No, it smells damp, said the missus. The stewardesses were smartly attired in red. When the entertainment system was switched on, the man appeared, bling and all. “I carefully chose the menu and the flight attendants myself,” he proclaimed in his 2-minute long soliloquy clip, which I thought was distasteful. The flight was uneventful, the food bland, the service abysmal, and we swore we’d never fly Kingfisher again. Two years later, in 2012, the company’s licence was cancelled.

Now to Mallya’s latest tweets. “Airlines struggling financially partly becoz of high ATF prices. Kingfisher was a fab airline that faced the highest ever crude prices of $ 140/barrel. Losses mounted and that’s where banks money went. I have offered to repay 100% of the principal amount to them. Please take it.” But I beg to differ with the former baron. Kingfisher was all fluff from the word fly. It didn’t deserve to be up in the air. Here’s why according to a Twitter user: “If your airline suffered from high crude prices, perhaps it was because of poor hedging strategies, which other airlines manage quite well.”

Mallya is also hurt when people say he has stolen money. “I want to pay the banks and stop the rhetoric that I stole money,” he said. “Please take the money,” he pleads.

I wonder if that will get him off the hook. The Indian government is keen to make an impression in elections next year by making corruption a poll plank. And Mallya could be ‘grafted’ as a mascot in the ruling BJP’s campaign for 2019. A showpiece of sorts to present to the masses who can take some consolation and exclaim: how the mighty have fallen! Nice trade off for votes. From the colonial exploitation of the British Raj, bored socialist Bureaucratic Raj and now the unapologetic capitalistic Billionaire Raj, as James Crabtree puts it, India has come a long way.