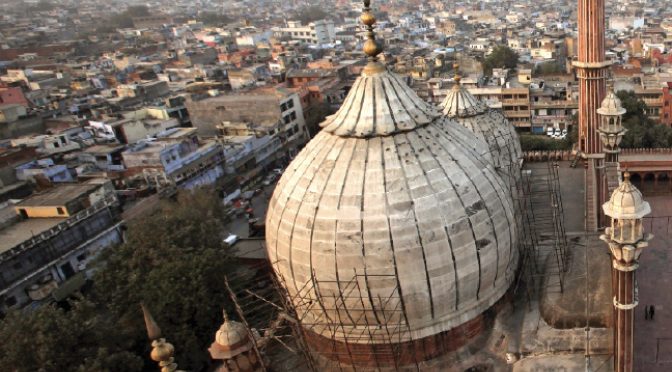 Chai! Chai! Chai! Our tour guide asked us to shout thrice for something we wanted and it would magically arrive. It only works for chai though, not money, not fame.

Three group shouts later, a young lad emerged carrying some paper cups and a kettle full of tea — chai. Anas, our guide then asked us to sit and relax as we sipped our tea and the midday sun shone above us.

Time seemed to moved slower as we sat on the roof. Gone were the honking tuktuks and people muscling their way through the crowd on the streets below. The alleyways of Chandni Chowk were replaced by the open sky and the occasional flock of birds flying over us. Squirrels would sometimes join our soiree as they climbed the rooftop and passed our group. That moment reassured my earlier impressions of Delhi — it was a peaceful kind of chaos.

Two days before shouting for chai on a rooftop, I landed in Delhi to attend the wedding of my good friend and colleague.

My first impression of Delhi was: an improved version of Manila. The roads are wider. Traffic is a problem but a semblance of order still manages to cut through the quagmire.

To my surprise, another colleague was also attending the wedding. Since both of us were not familiar with Delhi (she’s from Mumbai), we teamed up to explore the city.

Donning our face masks, we snuck out of the guest house past midnight and walked around Connaught Place. Most of the storefronts were closed but hawkers peddling chai and mishti doi (sweetened yogurt) made themselves at home. With her knowledge of Hindi and my curiosity, our evening jaunt turned into a culinary misadventure as we walked from CP to India Gate.

The food kept on coming. During the wedding reception, I was introduced to paneer (cottage cheese) and dal (lentil curry). The latter reminded me of a Filipino dish called munggo – a mung bean dish. I was told that I had to scoop the dal on top of the rice and then have some sort of meat or vegetable to complement it.

It wasn’t as much of a culture shock as I thought it might be. I have seen some of the items on my plate in Indian restaurants in Dubai. I was seated beside expats also from the UAE. I told the British guest beside me at the wedding that I was guilty of ignoring these dishes back in the UAE. But now that I’ve tried them out, there will be no looking back.

In Chandni Chowk, Anas shared a story about how Old Delhi came to be. While we listened, I thought about how I even reached this rooftop in the first place.

I moved to the hostel the morning after the wedding. I learnt on my solo trip to Ukraine last year that I wanted to be around people even if I call myself a ‘solo traveller’. While checking in at the common room, I was pulled into an impromptu introduction by a man I would later know as Anas. It was this introduction (and the lack of breakfast) that made me postpone checking in so I could join his group for their food tour dubbed the ‘Delhi Belly’.

That morning he took us to the old part of town, Chandni Chowk, where we sat in an alleyway to eat chole bhature for breakfast. I thought to myself: will this get me full? My idea of a breakfast is a huge spread with eggs and pancakes, but here I was, sitting in front of a doorway with a serving of chickpeas and bread. That modest plate of chickpeas got me going through the entire day. We also sampled another breakfast dish called alu-puri (deep-fried bread with potato curry). which fascinated me. I felt like a kid breaking off a bit of this blown-up fortune cookie and then putting some curry on it. It was a larger version of my other new love, the panipuri. (smaller, round crisps with a hollow for diced potatoes and spices). As the Jama Masjid towered in the distance, a glass of lassi (a sweet or savoury smoothie) concluded our breakfast.

Throughout the tour, Anas made it his mission to make sure all of us in the group befriended each other. While we sat on the roof sipping our chai, we listened to him share anecdotes about his life, how he enjoyed working as a guide and meeting new people like us. Our group comprised of wanderers, university graduates, a newlywed couple on their honeymoon, backpackers already looking for their next stop and this one curious Filipino.

After chai, we got back to street level and ate samosas (stuffed triangle pastry) and lemonade. Conversation continued to flow. David, the oldest in our group, a Swiss national took an interest in my anecdotes about the Philippines since he has wanted to visit my country. Brady, from the US, joined our conversation as he recalled staying with his Filipino friends in the affluent part of Manila. When the barfi arrived for dessert, I told them how the sweetmeat was a common sight in the office thanks to my Indian colleagues.

Our time with Anas concluded with lunch. In a packed corner of Old Delhi, we sat at an eatery (parathewala) that has been around since 1875. As we sidled in on our table, I noticed photos of Bollywood celebrities and newspaper cutouts.

When our lunch arrived, one metal plate was served for four people. I shared a plate of paratha and five curries with David and my new seatmate Anke from the Netherlands. David and I concurred that dipping the paratha in banana curry was the best combination. This was the first time I ate banana like that. Anas also taught us Hindi words that we used to call the attention of the staff so we could order more parathas. They had banana, lemon and even almond parathas!

As our quartet demolished one paratha after another, I was reminded again of how the social aspect can make a journey all the more enjoyable.

After the tour, David, Anke and I continued our exploration around Old Delhi and made it our mission to see the Red Fort and Connaught Place. Later that evening, David and I made new friends as we sang Queen’s Bohemian Rhapsody at the hostel’s rooftop. Singing on the roof was the perfect end to a morning of shouting at the sky for chai.

Keith is currently looking for the best panipuris in Dubai. Recommendations?