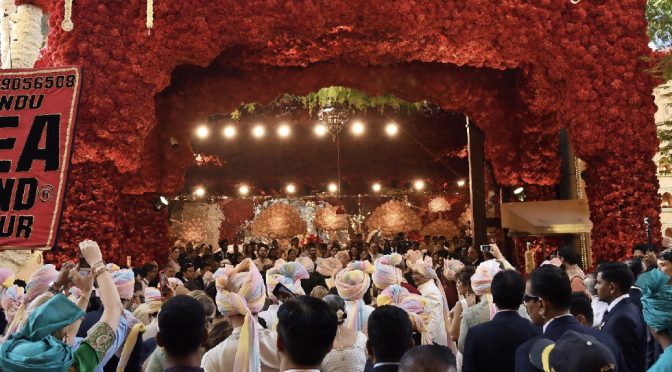 Five years ago, when my partner and I exchanged vows, I was assured it would be the most magical day of our lives. When the fantasy played out in real life, I couldn’t wait for the ‘magic’ to get over. The thought of going ‘over-the-budget’, the pressure of looking half-decent as a bride and the anxiety over more guests showing up than expected (most Delhi-ites don’t believe in RSVP-ing) exhausted me. The nail-biting moments came to an end only five days later when the celebrations were over.

Looking back at the time, when I see pictures of my wedding, they seem to communicate the angst rather well. My smile seems weary, my partner looks confused and our closest family members appear as though they might revolt any minute. The only happy faces are those of the guests.

Perfectly imperfect — that’s how I remember my wedding day, and perhaps that also made it memorable. But imperfection is not something that celebrity weddings can afford, as has been evident in a spate of Bollywood weddings that took place this year. At the time of going to press, Priyanka Chopra is now Priyanka Chopra-Jonas, Deepika Padukone and Ranveer Singh’s post-wedding celebrations seem to have finally come to an end, and billionaire Mukesh Ambani has just hosted a grand wedding for his daughter that may as well be called Theatre of Spectacle (after all, how often would you see Hillary Clinton and John Kerry break into a dance with Shah Rukh Khan?)

The lesser known among us participate in these celebrations through social media posts. What’s in it for us? Aspiration!

I myself was interested in the Nick Jonas-Priyanka Chopra union. It certainly helped that the duo simultaneously released a selection of jaw-dropping pictures of their wedding celebrations at Umaid Bhawan. The photos are what the millennials would call ‘#weddinggoals’. No grumpy faces, no strand of hair out of place, gorgeous hues, clothes styled to perfection and two very beautiful people. You can’t go wrong when these boxes have been ticked.

Granted, celebrities or non-celebrities, no one likes to put their vulnerable side on display for mass consumption on Instagram, but these marriages have been statements unto how stars like to conduct their public and personal life. Decoding the celebrity weddings, Cambridge sociologist Parul Bhandari notes in an article in Scroll how the weddings of four Bollywood actors — Sonam Kapoor, Deepika Padukone, Priyanka Chopra and Anushka Sharma — are actually attempts to “signal their status as cultural ambassadors of a modern and increasingly global India”. Bhandari also notes that while the moments have been heartfelt “the strict control these couples exerted over dissemination of the videos and images cannot be ignored.”

Practising this control is not an exercise in PR. Today’s stars are crafting an identity for themselves that can appeal to a modern, urban audience. A reason why the image of an overly emotional bride and chivalrous groom is absent from these pictures. Today, for celebrities, marriage is an extension of their already-established and publicised companionship. Also, in the digital age, the meaning of celebrity has changed. The fan base, armed with its own social media accounts, demands a direct update from the star. Given the nature of this interaction, the need to carefully curate posts about your so-called most important day feels necessary, even if it means editing and keeping out the more real aspects of a wedding.

Writing for the Indian news website, The Quint, senior journalist Khalid Mohamed talks of an era when celebrity weddings enjoyed little media spotlight and absolute privacy was non-negotiable. While Amitabh Bachchan and Jaya Bhaduri tied the knot away from the press’ gaze in 1973, an interesting anecdote about Saira Banu’s wedding to Dilip Kumar was never played up to sensationalise. ‘“Tongues had wagged that Saira Banu’s mother, the legendary actor Naseem, had disapproved of her daughter’s friendship with co-star Rajendra Kumar. The mother had asked, “Why don’t you get married? Anyone will marry you.” To that, Saira had riposted, “Fine. Get me Dilip Kumar and I will marry him rightaway.’” Mohamed notes that most journalists were aware of this nugget of information, but chose to downplay it because they didn’t want to publicise this.

Clearly, times have changed and the stakes are higher. While a trending hashtag of a wedding cannot be a substitute for happiness, it is a measure of the clout that a celebrity enjoys. To that end, how much is too much? Rather, is anything really too much?

Anamika is interested in observing and recording thought and action