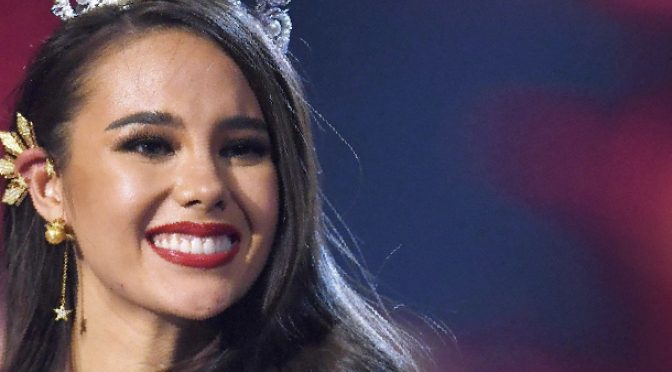 On the day Miss Philippines Catriona Gray was crowned Miss Universe, I was watching a video of Filipinos react to her victory. In the clip, I noticed families, friends and colleagues coming together, all huddled around their televisions. Life stood still in the Philippines. Nobody was doing anything other than watching the pageant. When Gray took the crown, everyone had their eyes glued to the screen. When she was proclaimed the winner, the video showed a good portion of the country going bonkers.

This wasn’t the first time such commotion took place. As a student in Manila, my neighbourhood would turn into a ghost town whenever Manny Pacquiao had a boxing match. Stores would close. If they weren’t closed, the storeowner would be fixated on the telly. You had to call for their attention. Tricycle riders remained in their stations because they all watched the match and placed bets. Cars wouldn’t move. The roads would be empty — an unlikely sight in Manila.

Watching Filipinos glued to the Miss Universe contest, I was reminded of that stillness whenever Pacquiao had a bout. There was a video of government employees around a television breaking into screams when Catriona was crowned.

While I don’t consider myself an avid fan of pageants, I’d get my Kabayan card revoked if I said that I didn’t stay updated about Miss Universe. Miss Universe is one of Filipino culture’s most interesting facets. We take the pageant seriously. Local news networks and newspapers cover every aspect of the pageant even before it starts. Interviews and stories about our participant’s interactions abound. Case in point: when supermodel Tyra Banks commented on Catriona’s now viral slow-motion spin, it received a lot of coverage and praise (for Banks and Catriona). But our culture’s fixation for the pageant also has its negatives.

I’ve always found the Q&A round interesting. Ever since I watched my first Miss Universe in 2007, I loved how the questions were in tune with current events. Catriona was no stranger to this. One of the things she was asked by host Steve Harvey (you know, that guy who declared the wrong winner back in 2015?) was her opinion on the use of medical marijuana.

Drug use is a sensitive topic in the Philippines. This can be attributed to the spate of extrajudicial killings of alleged drug users, which Philippine president Duterte supports. The question didn’t faze her. Gray replied: “I’m for it being used in medical use but not so for recreational.” (sic) Her answer divided a united Filipino community. Open-minded folk admired her for her stance while the conservatives opined all drugs are bad for you. Watching her answer that question with logic and grace made me read up more about her. I was impressed.

Another winner was ‘crowned’ during the pageant. Ms. Spain Angela Ponce received a standing ovation when she took to the Miss Universe stage — the first transgender woman to do so. Majority of the Filipino populace didn’t quite like this moment, and soon enough, Ms. Ponce received hate and sexism on social media, but Gray stood up for her. During an interview with local TV show The Bottomline, Catriona expressed her support for making the pageant more inclusive. Gray told the host, “She has a purpose. She is that voice for the transgender community.” She also defended Ponce against vitriol. Said Catriona: “She didn’t just wake up one day and was like, ‘I feel like being a woman!’ She feels it in herself. That is who she is.” Miss Universe’s comments show us how far the country has to go before coming to terms with diversity.

Gray obviously deserved to win. And no, not just because we share a nationality, but because she had the courage to express her opinion even though it may not have been the popular one. In a world that is divided and diverse, Catriona’s voice can convince Filipinos to come together. If we as a people can unite to witness her win, why can’t we do the same thing at other times?

Keith would like to congratulate Ms Gray for the win. Long may she reign