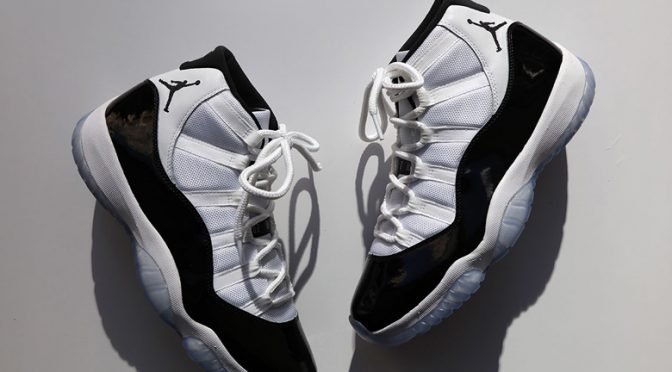 Almost 16 years after playing his last professional NBA game on April 16, 2003, his legacy rages on. And there’s no other way it’s personified than how his kicks have created and influenced an entire culture.

On December 8, the Air Jordan XI ‘Concord’, a white-and-black colourway of His Airness’ most iconic shoe, dropped in stores and online. ‘The Grail’, as it is considered, is one of the most notoriously difficult pairs to cop; very limited releases coupled with off-the-charts demand and hype is quite a volatile combination.

So, given this small window of opportunity, I happily woke up at 6.30am, took a shower, had my coffee, and walked to the Nike store at the Mall of the Emirates, checking in at 7.30am (great advantage to live across a major mall). No small feat for someone who normally gets out of bed at noon on weekends.

As a sneakerhead, one has to keep up with release dates of special kicks. I got wind of the Concord release early this year, so I marked that on my calendar 11 months in advance.

Now, silly me, discussed this shoe obsession of mine to a colleague. What happened next was a masterclass in picking someone’s (shoe-infested) brain, trying to find out what makes someone ‘sole-ful’ as me tick.

Ladies and gentlemen, some paraphrased, no-holds-barred excerpts from our little back-and-forth.

Wasn’t 7:30am too early to troop to the shoe store?

No. I’ve heard news before that another popular Air Jordan XI release, ‘Bred’ (black and red) from some years ago, attracted people who ‘camped’ overnight at malls.

Were you afraid the store would run out of stock? Or did you want to become first?

Not exactly. I was No.3 that day; a couple beat me to the draw. But going first didn’t matter to me. I just wanted to make sure I was among the early birds so I would have a good shot. There are limited pairs per store and I could run out of my size.

Have you done this before?

Yes. When the Air Jordan XI ‘Win Like ’82” was released on November 11 last year, I was No.1 — and I came in at around 8am. As a little bonus for all my trouble, I got my moment of fame when the staff took my photo, me gloriously holding the pair while flashing the ‘No.1’ sign, which they uploaded on their Instagram account.

And how much did you shell out for this pair?

Whoa. And how many pairs do you own now?

‘Just’ about 60. Believe me, that figure’s peanuts compared to real sneakerheads who own hundreds, even thousands, of pairs. I would’ve had over 70 had I not passed some on to my son; now that he’s all grown up, taller than me even, I’m pretty sure I’ll be the one asking for his some of his shoes when he outgrows them.

Do you stick to a particular brand or do you have from all the major ones?

I’m a nut for Nike and Jordan, primarily. Adidas creeps into the picture when it has some cool designs.

Put it this way: I’m attracted to retro models, those made popular by those who played in them ages ago. If I were made to choose from LeBron’s line, I’d pick his first shoe — the Nike Air Zoom Generation from 2003. As for Kobe, I’d go for the Adidas The Kobe models from the early-2000s. And don’t forget Shaquille O’Neal’s Reebok Shaqnosis and Grant Hill’s Fila GH2. Other Nike kicks I would love to have are those worn by Vince Carter, Kevin Garnett and everything Penny Hardaway (some of which I already have).

I have no idea what those are… but what’s your favourite pair?

Tough question. But there are two that stand out — and, ironically, both aren’t Jordans: the Air Max Uptempo 97, popularly worn by his running mate during their Chicago Bulls glory days, Scottie Pippen; and the special Philippine limited-edition LeBron 14, for which my wife moved heaven and earth to secure.

So, like, is every pair tied with an obsession with basketball?

…never mind… and your weirdest pair?

A pair of Vans gloriously designed with Hello Kitty — which I actually wear.

I put jam on my pizza, dip onion rings in Nutella and…

[Squirms] Alright, enough… so you queued up for those Uptempos too?

Nope. I chanced upon it when I was in New York last month. Just my luck and — oh! — the joy of not having to line up for such a unique pair.

Looks like your shopping area isn’t limited to the UAE.

Whenever I’m in the US, I make sure to survey the area I’m staying in, check where the shoe stores are, and set aside time for it. That New York sojourn was the best — because I was able to go to Flight Club, arguably the most popular sneaker store globally where you can find some of the most elusive and most outrageously expensive pairs: a Kobe Air Jordan pack is listed at $20,000 (Dh73,465), while the Nike MAG from Back to the Future — lights, self-lacing and all the swag — will set you back $45,000 (Dh165,295). One more great thing about buying in the US is that they’re cheaper there by — depending on which state you’re in (taxes) —Dh150-Dh200 a pair. So I make sure to pick up a pair or two when I’m there. When online retailers go on a super sale, I buy them, have them delivered to my aunt in North Carolina and she sends them over in one of those balikbayan boxes. She, too, gifts me a lot.

Did you cop a pair from Flight Club?

Nah. I may be obsessed, but I don’t go overboard. I still have a sense of practicality. I don’t want to end up sleeping with my shoe boxes beside me on my bed. And that Dh999 pair is the most expensive I’ve bought so far. I can get my fill just by loitering around and going window shopping in a shoe store.

Do you resell shoes for a profit?

No; it’s really a personal thing for me. When I get a new pair, I’d let it ‘sleep’ with me on my bed for the first few nights. And it takes me a long time to debut on my feet: I have some pairs that I haven’t worn yet, some of which are nearing the two-year mark since I bought them.

Nowadays, when I hunt for shoes, it’s usually for my wife (whom I’ve successfully influenced) and my son (whom I’ll soon be inheriting pairs from). Maybe both of them end up being sneakerheads as well.