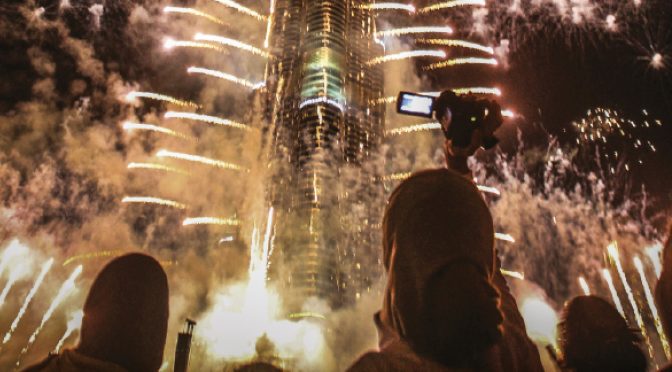 Five years ago, I saw the Burj Khalifa fireworks display for the first time. I was new to Dubai and soon to be introduced to our family tradition of viewing fireworks from the street across the house.

Over the years, I have invited friends over on New Year’s Eve, and mentioned to them our view of the Burj fireworks, sans crowds and exorbitant fees for table reservations. I have photos of each of the last five year’s fireworks display.

Seeing the Burj and other landmarks in town lit up reminds me of back home. Every year, we would celebrate New Year’s Eve in Manila when my uncle came home with a stash of fireworks that we would light, come midnight. Other families in the neighbourhood would bring out their own stash and do the same.

Inside, on the television, there would be one safety advisory broadcast after another telling us to not ingest hazardous chemicals, keep clear of lit fireworks,  watch out for stray bullets(!), and flash scenes from hospitals showing injuries caused by firecrackers.

Outside, I would stand with the whole family and watch in awe as firecrackers were lit (safely, of course). When the flame reached the end of the wick, we would be treated to either a ‘kaboom’ of a cracker or a rainbow of colours. The neighbourhood would be similarly lit and we would all be left with clouds of smoke and all of us wishing each other a happy new year.

My first four years in Dubai were like that — except we watched the display unfold from a distance. No more stash of fireworks, no more lighting them up on the streets. It was a watered-down, albeit safer experience. Once the Burj fireworks started to unfold, I didn’t mind the compromise. The skyline of Downtown Dubai would light up with a spectacular mix of colours and lights dancing across the sky. On the TV, we would see live broadcasts of fireworks elsewhere such as at Kite Beach.

When I started working at Khaleej Times, I had the privilege of watching the fireworks up close. In 2016, just three months into the job, I was assigned to cover the display at Burj Al Arab. It was magical. There I was, in a crowd of locals and expats staring in awe at the reds and greens in the sky. The fireworks were so grand, at times it felt as if you could touch them. Tourists, families, groups of friends had come together to ring in 2017. I realised then why fireworks in Dubai are a crowd-puller: they unite everyone, regardless of social stature, race and background. In that moment, I felt the country’s spirit of tolerance in all its beauty — three years before the actual Year of Tolerance.

Towards the end of 2017 I understood it would be a while before I felt that kind of unity again. Sitting in the office and monitoring the New Year 2018 celebrations, I watched as Burj Khalifa strayed from the regular fireworks display to try out an LED show to ring in 2018. It felt… strange. As I stared out the office balcony, there were no rays of colourful lights, nor painted smoke. There was nothing. As I ended my shift and cycled back home, I thought, is New Years’ only for the paying crowd? What about us who watch from afar? The situation at home was also different. My mom told me they just stayed indoors. After all, there was no reason to walk out on to the streets to look at the sky. I felt indifferent, like I was let down because I didn’t book a table to welcome 2018 and all I saw was a black sky.

When the news of fireworks making a comeback for 2019 came out, I was ecstatic. I was still sitting in the office on Monday but what I watched on the live broadcast was worth it. Sure, some say it’s just two minutes long, but this is a return to form for the Burj after last year’s laser show experiment. To me, it was beautiful and it made me feel like a teenager watching fireworks go up the sky in Manila once again.

It reminded me of my first year in Dubai, walking out of the house to see the display for the first time in my budding expat life. It made me feel welcome. It was a show that everyone and anyone watched regardless of where they were. Some still reserved tables, some watched it on the streets, some saw it on the roofs of their homes.

Lighting up the sky, I believe, is essential to bring in the new year. It’s one of those occasions where people are united. As we enter another year, it’s nice to be with our loved ones and view a beautiful spectacle together.

Keith believes in unity — and just getting along