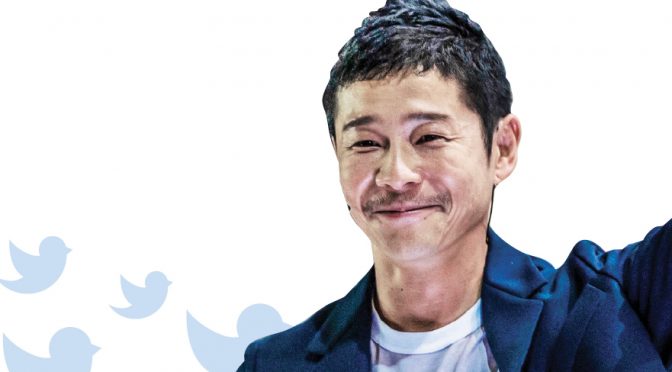 People do the strangest things for the sake of world records. They immerse themselves in snow for hours on end — clad in nothing but swimming trunks — to own the honours of being The One who spent the longest time in “direct full body contact” with freezing point. Or they cover their selves with bees: the more the better — because that’ll make them queen (or king) of an alternative, and human, version of the beehive. And so on.

Cut to the age of social media, and now you have the case of securing a handle in the domain of Twitter by getting the maximum number of retweets. Yusaku Maezawa is a Japanese billionaire. He’s the founder-CEO of Zozotown, reportedly Japan’s largest online fashion retail website, and is affably referred to as being a maverick. Now, you’d think he’s got plenty on his plate so far, and he’d be perfectly content to rest on his laurels.

Last Saturday, while I was hazily wondering if I should deactivate my almost-defunct Twitter account, Maezawa was busy tweeting… That whoever “retweeted” his tweet (and followed him) may be one of the lucky 100 — randomly selected — to receive 1 million yen (each).

Basically, he had 100 million yen to spare, and was willing to distribute the booty among 100 members of Twitterati. If you are not particularly on the ball with prevailing exchange rates, here’s the deal: 100 million yen converts roughly to USD922,000, so each of the 100 luckies — who are to be informed of their good fortune via direct messaging by the man himself — will be able to pocket a neat USD9,220… almost Dh34,000 if we’re talking local currency — which is not half bad considering all you had to do was retweet (even I know how simple that is!).

That was 5 January, and everyone was given the next 48 hours to do his or her bit.

Drum rolls… he now holds the world record for having the maximum number of retweets; additionally, his Twitter following has leapfrogged to over 6 million.

The BBC speculates that the “post appeared to be in celebration of his website Zozotown making 10bn yen in sales over the Christmas and New Year period”. Yep, there’s always justification. Remember, sometime in mid-2017, a teenager by the name of Carter Wilkerson created a new ‘fowl’ social media high by asking Twitterati to help him “win” a year’s worth of (free) chicken nuggets from Wendy’s by retweeting “HELP ME PLEASE. A MAN NEEDS HIS NUGGS” — because he loved nuggs so much? The well-documented story goes that Wendy’s had told him they’ll be needing at least 18 million RTs for his poultry stash to take wings — but when he managed to snag 3.6 million, they gave him his year-long chicken feast anyways. Apart from gorging on deep-fried lean meat for a year, Wilkerson set the record for max number of retweets; another bit of trivia: the 3.6-million-times retweeted tweet is still his pinned one.

When he was dethroned by Maezawa this week, he (sportingly, I thought) posted (on his pinned tweet thread), “I no longer hold the record for most retweeted tweet of all time.”

Sweet enough, but when I see stuff like this, the first thought that comes to my mind is: how much time do people have to waste? I’m trying to imagine myself being one of the legions who retweeted Maezawa: if I’m invested in Dh34,000, I’d be checking Twitter every two minutes to see how the game is being played out so far (that plus Candy Crushing, and my day promises to be as tight as a drum).

Here are my observations so far from this ‘max RTs’ record-breaking feat:

One, we will do anything for one-upmanship, our moments in the sun. Impossible is nothing — especially when all it needs is a roll call of tweets.

Two, we are heading towards doomsday-type issues in time management. I read a report by marketing agency Mediakix that says “the average person will spend more than five years of their lives on social media”. Already more than one-third of our lives are consumed by sleep. When will we ever have to time to be wakeful and smell the coffee?

Three, nobody really cares about the ethics of organic growth.

Finally, even as I grapple with the ludicrousness of handing cash for tweets, the bottom line is: money talks… and tweets.