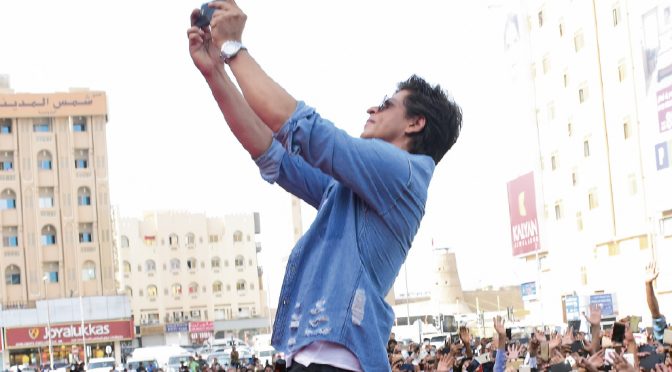 I rang in the New Year with thousands of revellers who had gathered in Ras Al Khaimah for a 13-minute long fireworks display that would earn the emirate a couple of Guinness World Records ( the ‘longest chain of fireworks’ exceeded 4.6km and ‘longest straight line of fireworks’ was 13 km).

By 12am on January 1, the temperature had dipped to 15-degrees Celsius but it felt much warmer thanks to the thousands gathered at the beach. The crowd swayed as the DJ continued playing music even after the fireworks were over.

I had reached the viewing deck at 5.30pm to cover the attempt at the world record, and by midnight, I was exhausted. But the night had just begun for a few, who kept asking the DJ for more. A couple of us tried to make our way out through the packed beach when the DJ played a popular Punjabi song from the 2000s, Mundiya Tu Bach Ke Rahi.)

As we stayed back a bit longer and bobbed our heads, an Arab man who must have been in his 20s wished me happy new year and said he and his friends used to dance on the track during their college days in Beirut. Moving his shoulders to the rhythm and trying to break into a bhangra step, he said anybody could dance to a Bollywood number.

A Lebanese woman who was with him joined the conversation. As a 10-year-old in the 1970s, she used to go with her family to watch Bollywood films. She struggled to remember the name of the Amitabh Bachchan film in which he played a boot polisher. “It ran in Lebanon for a very long time. What was the name of the film?” she asked me. Zanjeer? Kaalia? We finally locked Deewar as the right answer.

As we slowly made our way out of the crowds, she showed me a WhatsApp message she received that morning. It was a video of a young Lata Mangeshkar singing Jo Wada Kiya, with a full orchestra. “We have been listening to her songs for the longest time but never knew how she looked. I still can’t believe somebody can have a golden voice like hers!”

This wasn’t the first time that talk about Hindi movies started a conversation with people of different nationalities. Such chats can break an invisible wall. Moments like these have calmed my nerves in awkward situations. Like the time I first arrived in Dubai with four suitcases and 120 kg of luggage. At the final exit, an Emirati official saw me struggling to push my trolley. As he came forward to help, I feared that he would make me open my bags. But he smiled and said, “Ah, Madhuri Dixit”. He had met ‘Salman-bhai’ just a week ago and proudly showed me a selfie he had clicked with the actor.

I was equally amazed when during a visit to Armenia, I gathered that most Armenians knew India as the country of “the handsome Raj Kapoor”. My guide, Narek, for the five-day trip to Yerevan shared that he had watched the ’70s movie Mera Naam Joker on VHS tape at his neighbour’s house.

Hindi cinema of the 1960s, 70s and 80s connects Armenians to India. Walking through the streets of the main city, Yerevan in the evening, it was common to see musicians play Mera Joota Hai Japani (from Shree 420) or Ankhon mein Teri (from Om Shanti Om). I stood mesmerised as a young Armenian tried to match the moves and expressions of Shammi Kapoor from one of his signature songs, Chahe Koi Mujhe Jungle Kahe and asked me to sing along.

“Everybody knows Raj Kapoor here,” Narek said. “His acting and the way he moved his head and the songs made him a household name.”

I have, over the years, enjoyed these conversations with strangers. They are usually eager to share their knowledge and fascination for Indian films. A Malaysian friend in Dubai recently asked me for a ‘dhamakedar’ (explosive) Bollywood song recommendation that she wishes to perform at her wedding. Another Filipino colleague won’t stop raving about Bollywood after he watched four films out of curiosity. They always want to know more. And always have a question ready — ranging from something, “Do they really make 1,000 films a year?” to “Why do you dance around trees?”

These brief chats often turn into lengthy conversations and become the highlight of an otherwise forgetful meeting.

Once, my co-passenger on a 10-hour flight to Ireland asked for a recommendation for a Hindi movie when he saw me peeking at his screen. He was scrolling through the list of Bollywood films on the in-flight catalogue. I suggested Sanjay Leela Bhansali’s Bajirao Mastani. Brandon, from Ireland, in his mid 30s, was a Shah Rukh Khan fan. He had seen most of his movies, a few that even I hadn’t. Swades, My Name is Khan and Chak De! India topped his list of Shah Rukh films. “I shared a room with an Indian for two years. That’s how I got hooked to Bollywood,” he said.

As he began watching Bajirao Mastani, he wanted to know the language Ranveer Singh spoke in some of the dialogues. He recognised the sound of Hindi and knew the language being spoken was different). Marathi, I told him, that it was spoken in Mumbai and the rest of Maharashtra.

Brandon knew that the “light-eyed” Aishwarya Rai was married into the Bachchan family. We spoke about Hrithik Roshan’s Krrish series because he thought, “it was a good attempt by an Indian filmmaker”, as was the Oscar-nominated Lagaan. He wanted to see more of Aamir Khan’s works.

At the conveyor belt in Dublin, when I said goodbye, he responded, Kabhi Alvida Naa Kehna — another Shah Rukh Khan film, which means don’t ever say goodbye.