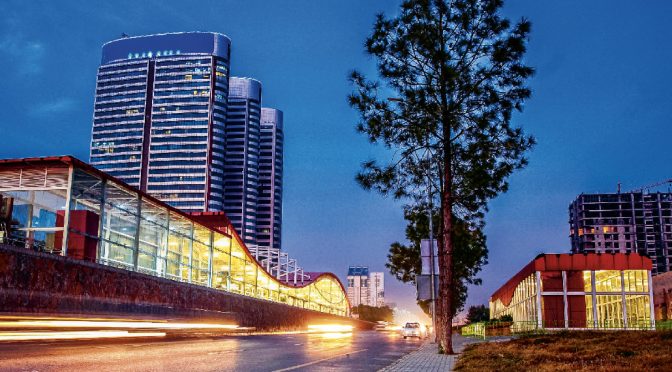 It didn’t take me long to pack my suitcase for my holiday in Islamabad, Pakistan — salwar kameez (traditional Pakistani clothing), party wear for the wedding I was going to attend, thick coats for winter, makeup bag, toiletries, and I was ready to go.

The last time I visited my hometown was in the summer of 2014. I don’t get to go often, so I had explored the city like a typical tourist: went sightseeing to the Rawal Lake, the new Centaurus Mall, Safa Gold Mall, Jinnah Market, Blue Area, Daman-e-Koh and Pir Sohawa (add these to your Islamabad tourist destination checklist, by the way. You won’t be disappointed!).

The contents of my suitcase in 2014 didn’t look too different back then either — except for the winter coats and wedding outfits, of course.

This time I felt more confident about going back. My Urdu had improved and I packed no jeans and t-shirts, only salwar kameez (lessons from earlier visits). I haven’t lived in Islamabad, so on previous visits, I’ve felt insecure about my Urdu-speaking skills (particularly my ‘accent’; my grammar is on point) and in the past I have made the mistake of wearing fitted jeans and t-shirts, causing many unwanted stares.

Little did I know that my newfound confidence was going to blow up in my face. When I arrived at the new Islamabad International Airport, I was pleasantly surprised and, admittedly, felt a little naïve. It was clean, organised and huge. It didn’t feel like I had stepped into Pakistan.

The surprises didn’t end there, though. While I was trying to show off my Urdu to fellow Pakistanis, I was getting a response in English from most people. Again, didn’t feel like I was in Pakistan. Maybe, they were replying in English because my Urdu hadn’t improved at all and I was coming off as an annoying tourist wearing a salwar kameez in an attempt to fit in.

As my parents and other siblings had taken the family driver, my sister and I opted for Careem (the co-owner Mudassir Sheikha is Pakistani and they started operating in Pak in 2016). For only Dh7 a ride, my sister and I made it to all our destinations. It was dirt cheap. In Pakistan, 30 per cent of the drivers are women. There are, in any case, a lot of women drivers in Pakistan, even riding bikes. While we didn’t ride with any female drivers, we felt safe in the cabs. It was very convenient. Mind you, back in 2014, none of these options were available as a combination, so for me this was a complete transformation of Islamabad.

On my first outing in Islamabad, we went for lunch to a restaurant in Blue Area (an area close to the Parliament House), a place called Loafology. The place served the kind of food you would find at any of the cafes in Jumeirah — smoked salmon bagles, brioche French toasts, Viennese coffees, flat whites, skinny lattes — you name it. We were welcomed by waitresses wearing jeans and t-shirts. Guess what? No one in sight was wearing salwar kameez. Clearly, I had to reevaluate my packing skills, and apparently, the lack of knowledge of my own country. I overheard a man at the café talking in Italian one minute and in Urdu the next. He was Pakistani. What was different about Islamabad? The people. Loads of tourists from China, the US and the UK. Pakistani girls hanging out in groups, wearing trendy clothes, taking selfies.

Islamabad had also been hit by globalisation. I saw what I see in Dubai, girls in the trendiest western clothing, shopping at Mango, Aldo and Accessorize, taking selfies, posting them on social media, hanging out late at night and hitting up the top brands in malls. I must admit, I was really surprised.

When I came back to Dubai, I discussed the changes I’d seen with some of my friends who’ve gone back to Pakistan more often than I have. I told them maybe I didn’t know enough to correctly examine the changes, but they said I was right — Islamabad had indeed transformed.

The women are dressing differently. People are more fit. Earlier, you’d see the moms in more traditional outfits. Yes, they also wore jeans, but mostly with a kurta, a long-ish tunic. Now, everyone was wearing fitted clothes and seemed in shape. A lot had changed! I must admit that I got a fleeting shock, like, whoa, what’s happening to our culture? But it was good to see. And just because I didn’t on one trip back see too many women in salwar kameezes, that doesn’t prove they have been done away with or people have stopped wearing them altogether. Of course, not. But the change was perceptible.

The infrastructure, too, was top class. Everywhere we went, the roads were not pot-holed. Tourist destinations were lit — they had vibe and were buzzing. The transportation had improved. People were driving better, it seemed. And there were fewer begging rings on the streets. Perhaps the biggest change was that Pakistanis had become optimistic, all thanks to the new Prime Minister, Imran Khan.

We spoke to several restaurant workers and Careem drivers who believe Pakistan and its people are in for a positive change. During my last visit, the vibe was completely different — people just didn’t seem… happy. It wasn’t as clean and there was no Uber-Careem.

All the traditional clothes I had brought with me from Dubai were useless now — thanks, globalisation! When I asked one of the drivers which was the best place for shopping, he suggested Centaurus Mall. Ah, one place in Islamabad I was familiar with.

As I headed back to Dubai, I took several lessons home with me. One, Islamabad is a trendy city. Second, I need to learn more about own country and third, I was adding my own country to places I would definitely would want to live in.

When not reporting, Sarwat is blogging and attempting to become the next big influencer