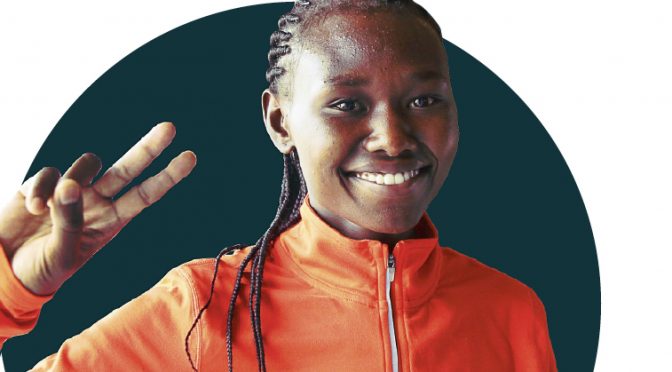 There are plenty of inspiring stories of legendary marathoners that Kenya and Ethiopia produce.

Places like Iten in Kenya and Bekoji in Ethiopia, and several others, are brimming with tales of athletes who’ve gone from rags to riches, overcoming poverty and becoming world champions and Olympians.

There are stories of champions who’ve worked as tea pickers, who used to run on empty stomachs and faint, wearing worn-out shoes with toes visible.

When I worked in Mumbai, and covered the Standard Chartered Mumbai Marathon, I once spoke to an athlete who told me she used to run miles across the countryside to fetch water and then run back. That was her training, so to speak, before she was spotted by marathon scouts.

That was a decade ago and things may perhaps be better now with a more professional set-up coming in thanks to the champions of yesteryears taking these raw gems under their tutelage.

One is not sure if Ruth Chepngetich has any such story to tell, as she hardly talks, a shy giggle interjects the few words she mumbles.

But the one trait she has in common with the thousands of runners that emerge from Kenya and Ethiopia is her love for running.

So much so that she is, at the moment, the fastest woman marathon runner on the planet.

Ruth defended her Istanbul Marathon title last year with a personal best time of 2:18:35, where she also eclipsed the course record.

She has been running marathons professionally only since 2017 but her body of work has been impeccable.

Among the full marathons, she won Istanbul twice and was second in Paris.

But what’s even more astonishing about Ruth’s story is she is self-taught.

“I don’t have a coach,” reveals Ruth.

“I got interested in running while I was still in school. I liked to just run, run and run,” says the 25-year-old with an infectious smile.

The pure love for running and sheer hard work is what has got her to where she is today.

“I started in 2014 by running in a half-marathon in Kenya and I finished 14th. So, I felt that I had the potential to run at the top level. I loved the experience and I decided I wanted to become a professional athlete. So, I got down to training and working hard all by myself,” explains Ruth.

She also ran races in 2015 before making her professional bow two years ago.

As build-up to the flat race, Ruth trained on hilly terrain in Ngong, back home.

“I found a flat place to train for my preparation to come to Dubai. I think it doesn’t make a difference. What matters is how hard you work, be it a hilly course or a flat course.”

Having run almost 100km a week as part of her training regime, she intends to return with the top prize. “I’m expecting a good result in Dubai.”

Ruth represented Kenya in the World Half Marathon in Valencia last year. Her next goal is just around the corner, in Tokyo. “My ambition is to run at the Olympics in 2020.”

Her immediate goal though is Dubai. The running rivalry, quite literally, with the Ethiopian runners, will be tough.

But like that oft-used cliche goes, Ruth wants her running do the talking.