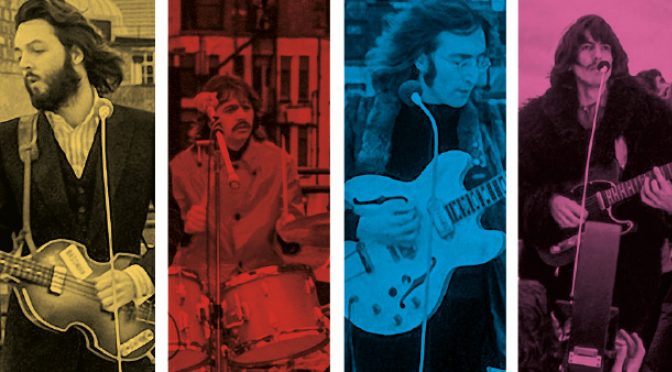 On January 30, 1969, Londoners enjoying their lunch breaks received the surprise of their lives when music blared from one of the rooftops in the area. The sound emanated from the rooftop of #3 Savile Row, and that sound was none other than the Beatles.

The Fab Four’s final public performance took place 50 years ago. The idea first came to be as the band brainstormed about where they wanted the concert to take place. It was also going to be their first live performance since they stopped touring in 1965 – the height of Beatlemania. According to the magazine Rolling Stone, proposed locations included: the Sahara Desert, a Roman amphitheatre in Tunisia, the Giza pyramids and the QE2 ocean liner (AKA that fancy ship in Port Rashid).

John Lennon is mostly credited with coming up with the bright and practical idea of doing it on the roof. In the book, The Beatles Anthology, Ringo Starr recalls: “We would have had to take all the stuff, so we decided, ‘Let’s get up on the roof.”

The concert was the coup de grâce to the Get Back recording sessions which was marked with a lot of infighting in the band. This was the time when the four men were starting to go their own ways and being together, it was clear, just wasn’t going to cut it anymore. These acrimonious sessions were immortalised in the film Let It Be, which was also the name of their final album; more on that later.

That concert marked the end of the band and with it, the end of an era.

My grandfather had a bootleg recording of the concert that he played more than once. I was in my teens when I started to appreciate the film more. As a kid I loved watching Yellow Submarine because, well, it was cartoons. Now, I loved Let It Be for transporting me to that fateful day, being with the London crowd, hearing the Beatles’ swan song.

Dig A Pony is the rambling of a man in love. It was a smorgasbord of lyrics which segued into a powerful chorus: “All I want is you.”

The nonsensical lyrics could either be intentional or otherwise but what mattered in that song were those five words — Lennon requested an Apple Corps staffer to hold up lyric cue cards while he sang.

Be that as it may, the song remains his proclamation to the world that he only wants Yoko. And of course, they remained a couple until Lennon was shot in 1980.

Perhaps no song better encapsulates that final gig more than Don’t Let Me Down. In a way, it was the Beatles’ message to each other, to the crowd below and to the rest of the world. What gets forgotten in the conversation is the concert took place in the aftermath of the Summer of Love. The Beatles partook in the counterculture movement of the ’60s with their earlier album, Sgt. Pepper’s Lonely Hearts Club Band. This was the time when music wasn’t just music. It was a form of protest — a concept that Don McLean immortalised in the campfire classic, American Pie. According to YouTube channel Polyphonic, McLean references the band and their impact on the hippie movement in multiple lines:

“And while Lennon read a book on Marx, the quartet practiced in the park” (Lennon’s protests, counterculture influences; The Beatles’ 1966 Candlestick Part concert).

“Helter skelter in summer swelter” (Helter skelter is a song from the White Album, also named after the series of murders perpetrated by Charles Manson and his Family).

“Well the halftime air was sweet perfume while sergeants played a marching tune” (When the band dressed up as Sgt. Pepper’s Lonely Hearts Club Band).

Two years after the summer of love ended in 1967, its message was carried over by the Beatles. Don’t let me down, they told the world on that rooftop. Sure, the song is about asking your loved one not to hurt you, but it’s not that hard to see them use the ditty to talk about love that is larger than what is shared by a couple. With John on vocals, this correlation is even more obvious since Lennon was already an ambassador for peace with his multiple bed-in protests calling for the end of the Vietnam War.

Months after the concert, the band released Let It Be, their twelfth and final album. The album cover is arguably one of the most iconic covers to date. It was a tribute and celebration of the band’s long journey. The plain black background was offset with individual photos of the members in their element. Perhaps the use of solo photos represented the decision of the foursome to go their own way. The black background has an almost funereal appeal, telling fans that the Beatles are no more. Topping it off is the name of the album in white, block letters: Let It Be. The cover is their way of saying: “We’re going our own way now, but just let us be on this route.”

At the end of the 42-minute performance, the cops shut the concert down but not before Lennon quipped: “I’d like to say thank you on behalf of the group and ourselves, and I hope we passed the audition.” Yes you did, John. Yes, you did.