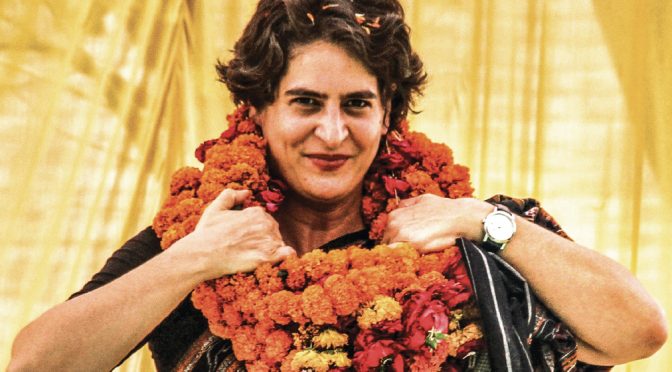 Now that the Indian Republic Day parade has refreshed the country’s passion and patriotism and like a flavoured mint at least temporarily removed the sourness of political bickering from our mouths we can be a bit more dispassionate in our collective excitement to anoint Priyanka Gandhi as the find of the century. Her arrival on the stage with the first official appearance on Monday being a huge success there is little doubt she is now the face of the Congress.

It has to be said even as the euphoria soars that her track record indicates a complete lack of interest in politics or the lure of power. In fact, she has gone out of her way to keep a low profile even while her husband has been in the unremitting crosshairs of the authorities for years.

So, why is there all this furore over a technical nobody or, at least, a total novice. Especially, someone who has gone out of her way to show no inclination to take over the mantle of the dynasty and comes with no mandate or experience or qualification.

Much of it is the splash of colour she brings to a jaded political landscape where for seventy years octogenarians have ruled the roost murmuring from the same dreary script. But a lot of it is also because of the times. Two decades ago the slowness of dispatching the message would have sharply reduced the glare of the spotlight. But like coffee, in this instant world, communications now have lightning speed.

In a few minutes and with even less than six degrees of separation an individual can be sculpted, packaged, marketed and extolled globally over multiple platforms. If cricketers and tennis players can be made celebrities with one innings and one win, if actors achieve stardom with one film why not political entities moved from relative obscurity to the pinnacle of fame courtesy a well-disposed media desperately filling space with novelty.

With Mrs Vadra it does not stop here at being just a good story. There is enough history on the bone. Much is made of the fact that she looks like her grandmother, a fact that is carefully cultivated and yet no more explains why that should count for anything. Yet, it does even though more than half of India was born a decade after her assassination. The ‘mai baap’ syndrome is an inherent part of the Indian DNA. We love the idea of looking up at our ‘betters.’

It is a gross label that was widely in use a generation ago where you were taught to stay within your ‘aukath’ (status limits). Add to this the fear which authority inspires in us and you realise that in some atavistic fashion the Indira Gandhi shadow still looms large…she was the only man in the cabinet (remember) and we love the idea of god being in his heaven and all is right with the world. That psychological throwback still persists, balanced out not by a confident honesty and a look in the eye but by blatant rudeness…which is not the answer to servility.

The British played this  game well even going as far as granting Indians the right to sit in their presence as a major concession for which the privileged were truly grateful.The hierarchy stakes were up and running.

The other game they taught us well was that of titling. They muted any possible resistance by flinging Orders and medals and other such goodies of the British Empire and purchasing loyalty. Honorifics like Sir and Lord deafened the silence even further. From that manner born grew the oak tree of dynasty and privilege. Bloodlines and breeding were sanctified. The rest were the great unwashed enjoying leftovers on a perennial Boxing day.

We can denigrate it all we like in our disdain for the concept of the relay but it is so us to hand down the legacy. Whether the arts or cinema, business or politics, father and mother to son and daughter is the norm. If all this wasn’t our cultural cellophane wrapping we would not have a fourth Prime Minister potential from the same family waiting in the wings. They don’t snatch power, we give it to them.

Consequently, this is what our political equation boils down to in the run up to the 2019 elections. Our natural obsequiousness so aptly cringeworthy in a recent poster issued by Congress party worker H. Vasanthakumar stating to Sonia Gandhi:We remain madameji, ever at your feet’ is evened out by Subramanyam Swami crassly announcing that Priyanka is bi-polar and beats up people.

And in the fascination for the trivial what is forgotten is the vast millennial segment of the Indian people, below 25 and wanting a new world. You go back in time and pull out  tapes and listen to Priyanka Gandhi speak and you realise she chats, not gives lectures, she charms, is self-deprecatingly humorous, hits a chord. The average age of Indians is 29 years and 300 million are in that sphere.

They have never booked a call on a phone, written or received postal mail, sent a telegram, used a Walkman or bought a cassette of music, filled a fountain pen with ink, bought a roll of film, listened to the news at nine or eaten peanuts in a paper cone. It is a sad commentary on our political firmament and their advisors that in 2019 they have failed to recognise this massive vote bank of savvy, frustrated, impatient, intelligent, ambitious young Indians living in a hi-tech era and  tired of shibboleths and soda water. They want results. They want visible conduits for their energy, their careers, their earning power…their hopes of a good life. They want signposting and they want someone who understands them.

They want some to help them cast aside the fetters of caste and communalism, poverty and ignorance that held back their parents and grandparents and kept them in their place. Now, this lot wants to go places.

The raw, green, untried Priyanka Gandhi might well snatch the baton from her brother and speak their language. No one else does. Will the newness wear off or will she have the staying power. The jury is still not back on that one.

Bikram Vohra is a former editor of Khaleej Times.