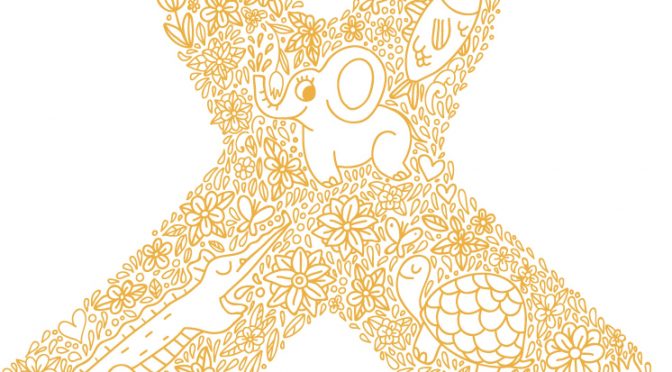 Any mama’s heart skips a beat with a bad scrape, unexpected fall or an extra careful doctor who orders another X-ray.  All of a sudden words like, Acute Lymphoblastic Leukemia, ironically abbreviated ALL, filled the air. With no planned preparation or pointless small talk, Reem plunges head first into the middle of it all and says, “Zoanne had leukemia.” I know that I’m here to get her story and try to capture a part of it, if even a tinge of it. But it is still shocking to hear. I swallow thickly but she barely blinks. She has had years to digest this and  share her story.  Her daughter Zoanne was six at the time and is now on the edge of those memorable teenage years.

ALL is the most common cancer diagnosed in children. The 5-year survival rate is 90% for children younger than 15 which makes it sound like a “good cancer” to have if anyone even dares say that. Reem tells me that she started a blog because she had people to explain things to. She had questions to answer. Concerns to acknowledge. And the never-ending support to cast-off and gracefully disregard. She had to wrap her head around the reality of it somehow and like so many, found peace in writing. So she wrote it all down judgment free where her paragraphs had space to be distanced from emotion and heavy with medical tones.

It doesn’t take long for the common thread between us to be drawn out. We acknowledge the looming gray cloud that lingers above everyone’s head when they’re feeling scarily euphoric. She highlights that prospect of potential rain that creeps into our thoughts when we think that ‘things can not get better than this’.  That is, until that all encompassing worry strolls in one drop at a time.  It feels like we’re sharing an umbrella, sharing stories — hip dysplasia and breath-holding syndrome from my own database — and chemotherapy stories from hers.  We remember that all encompassing parental need to protect from the heavy rain or in her case, the tsunami of apprehension.

I’m not going to detail the treatment plan or the intense new vocabulary she had to grow accustomed to, but words like, ‘cytarabine tablets’ rolled off her tongue where ‘ice cream’ used to.  The time line I’ve written is not exactly how it happened but instead how she accounted it to me, how I heard it and how people remember things — selectively and in a jumbled order. It is only natural that certain moments get thrown into the spotlight and prove more deserving of memory space than others.

The soft click of her heels is the only sound I hear when she is not sitting down talking me through moving piece of glass that suddenly took up so much space in her life. She styles a conservative ponytail and long skirt like the perfect hostess and tells me that she felt scared because things were too good but how she felt like “something was coming”. But all of that is really pushed into the shadows temporarily because her greatest accessory is her red hair like a Middle Eastern Jessica Chastain. Not a pessimist and a big believer in the notion that good things happen to good people, she felt betrayed when her daughter was branded a cancer patient.

“Zoe means life but Zoanne doesn’t really mean anything”, she states. Every cell that bonds to make her who she is has clearly been shaken by something. Zoanne was 6 at the time. In September 2013, she started noticing bruises on her body. “Every mama panics … and so I panicked.”

Reem continues telling me that she was active but not enough to get bruises like that.” With disheartened green eyes remembering it all, she tells me “I kept thinking of the obvious and quick solutions…maybe she didn’t eat … maybe she just didn’t have enough food.” Talking to me this is almost five years after the whole thing”.  I nod along at her mention of every mama’s initial knee jerk reaction to any problem — food and water. With a pretty good health record until this point, Reem tells me how she found herself suddenly researching blood diseases.

At the end of September she recalls taking her home and leaving her bags at school. Birthday parties, tantrums about Halloween costumes got replaced with more serious circumstances like Zoanne’s best friend getting chicken pox and her not being able to see her because chemotherapy kills all immunity.

It took all of a 15-minute conversation to change her everything. Her husband and the “love of her life” is half Greek and everything about them and her scream cliché except they are the farthest thing from it. His way was reading medical journals she says with a shy smile while squeezing her hands together. “They understand numbers.” Zoanne’s white cell was at 54 and should have been 5-10 range to make it normal.

They had a difficult 2.5 years of treatment and it was there that she decided that this was going to be their adventure. Great Ormond Street Hospital (GOSH) was where they decided to relocated and seek treatment. At the time, she decided to make sure it was all as normal as possible. “I heard myself saying, ‘An ambulance!  Have you guys ever been in an ambulance? How fun is this?’” I’ve been there as a mama. Where you dig deep for normalcy. She admits to being more “emotionally intelligent” now as she puts it and a lot more selective about what makes her cry.

With a cool, calm and soft voice, she tells me that her mom cooked and cleaned her way through it because what mom doesn’t think, “coosais useful.” Her dad would come and sit outside her room the whole day. “I realized in that moment. I was the parent and they simply didn’t know how to be in my shoes.”

From what Reem tells me Zoanne was older than her years with no typical tantrums to complain about. Once we went in the room “Mom is this it?” She tells me that everything was “different and intense” the first three months and her moods were what was expected because she had to take steroids every   weeks. She stayed home when Cayan was in school. I had to move in and furnish … “you know, pillows and forks” amidst all of this.

There were moments though, these moments where Reem and Patrick were far from connected. Moments where they found themselves looking at each others faces, mad and thinking about the worst possible scenario. “We felt that we were letting her down to have these thoughts”. They would schedule Thursday night diners with catch ups and crying in restaurants while listening to Lana del Ray’s powerful lyrics, “Like the stars miss the sun in the mornin’ sky”.

October 21 rolled by, it was Zoanne’s birthday and no one was there. Her 7th was meant to be a mermaid theme, and instead of talks of chocolate and sprinkles words like, lumbar tempa-dot and blood rolled off her tongue. She jumps to remembering that carolers were singing when she was crying. She recalls being, “caught in moments where I’d cry and suddenly realise what I was going through.” And that is when we suddenly see ourselves spending Christmas Eve in a hospital. “No one expects that” she says in an almost inaudible voice.

Little things become big things fast. Things like feeding tubes, scales (she weighed 21 kilos) and so cooking with cream, butter and milk became staples for this otherwise health conscious mama.  “We lived between breaks from medication, revelations that her weight had gone up and buying hats.”  Sept 2014 her hair started falling out. By March she had nothing. She was completely bald. As she recounts the pieces of this heartbreaking puzzle, she mentions that Zoanne’s hair changed.  It was straight and grew back wavy and unexpectedly new and stronger. An almost perfect metaphor but nothing about this ordeal was perfect.

After the whole treatment and when we came back to Dubai, “I needed normalcy but people didn’t get it”.  She paints a picture of dinner parties where it was justifiably hard to socialize.  She looks guilty and reluctant to have thought it, let alone uttered it.  Despite all that was going on, Reem somehow managed to open apple seeds indoor children’s playground in March 2013 and Flywheel that same year in the midst of all this mess. She tells me that she wants her daughter to know that she’s strong. And that going through chemotherapy was nothing short of a miracle — an accomplishment that not many 7- year-olds get to say.  But what Reem fails to take note off is that the apple doesn’t fall far from the tree.

Between bites of salad, she talks about being blessed with the right kids for us at the right time.  I’m a bit believer in that too. Cayan was a happy bubbly boy, which was essential because he gave Zoanne a lot to laugh about. He would innocently ask, “Do you have neutrophils, can I hug you” as though he were asking her ‘Do you have fries, can I have one?’

Talking to me after the fact, it is still raw and she resists the urge to break down while showing me her “scabs”. The pain is still there but somehow healed over by some hardened protective layer. The risk of relapse is there too.

What she says at the end of her blog still rings as true as the bell they rang for Zoanne when she left the hospital officially in remission in January 2016. “I have to document this journey as hard and as unhappy as it may be. Zoanne may one day like to read all about it” and I think to myself maybe this piece too.

So, what’s her currency and her ace up the sleeve?  “Just get on with it,” she says and just like that the conversation is over. It’s 2 am and she’s waiting outside her villa with me until my Uber arrives. It is just me, her and that practical and no-nonsense valour that got her through this. I feel obliged to ‘do’ like her and just keep going left foot, right foot forward.

Sara Sadik is the author of Magic in Mommyhood: How to Create the Illusion of Sanity amid Raging Hormones, Sleep Deprivation, and Diaper Rash