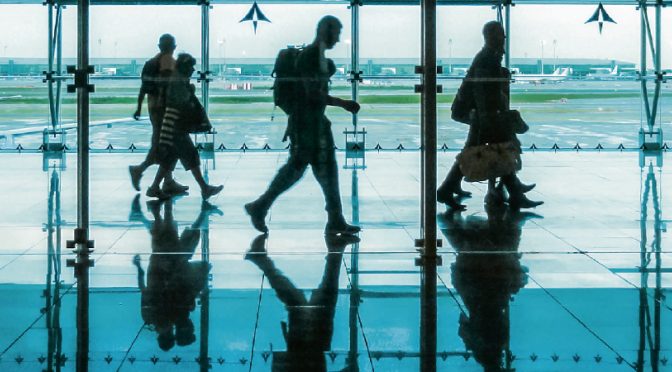 I’m guilty of misremembering much of the 2009 George Clooney-Anna Kendrick-Vera Farmiga vehicle, Up In the Air. While liking the film upon its first and only viewing, as time passed, a scene which resonated during the picture’s debut in my lounge had been reprocessed as needlessly offensive. I’m sure you’re aware of the set piece to which I’m referring. Clooney and Kendrick are embarking on their trip out of a local airport and, at the security scanning point, the elder imparts his well-honed formula applied in order to breeze through. The pearls of wisdom include highlighting groups of travellers to avoid waiting in queues for the x-ray machines, ultimately settling on standing behind ‘Asians’ because they’re ‘efficient’.

Given the past decade’s overdue redrawing of Hollywood’s acceptable social norms, my more enlightened conscious had since filed this comment and thus the entire film away in the “times have changed, don’t re-watch” bin, a category under which the number of movies is rapidly, and on the whole rightly, increasing.

Cut to last week and my flight takes off from DXB. Having forgotten to purchase a decent book, the only entertainment was provided by a few overhead screens showing a single film for the whole aircraft. How reassuringly nostalgic. What was on, though? You guessed it. The beauty of onboard films is, however, you always tend to select something you’d never normally switch on anyway. So I settled in for a second perusal. In retrospect, perhaps I had been a tad touchy. The suspect Up In The Air to and fro between its principals came and went and, whilst it is undoubtedly uncomfortable, the dialogue is more knowingly provocative than memory served.

Kendrick is continuously outraged at what Clooney purports are roundabout compliments. The ‘Gorgeous George’ eyebrows are also most definitely raised at the final racial epithet, almost goading the audience. In summary, all was forgiven. It is a very good film.

Having just made my way through a similar situation to the fictional duo after check-in — ambling along as herds of tourists were made to remove their shoes and where, despite machines being able to see through metal, it was necessary for laptops to be taken out of their flimsy canvas cases — the movie triggered a thought. Do I subconsciously evaluate fellow passengers based on their potential to slow me down in possibly the only situation where I find myself actually caring about expediency? Obviously, ethnicity doesn’t play a part, but I have to admit, yes I do. The more I ruminated on my conclusion, the more the realisation sunk in: true, I am judgmental, but people in airports are the worst.

What is it about travel, which morphs completely rational and normal adults into toddlers who have managed to break free from their harnesses? Those that display idiocy so blatant it prompts imaginary comments sarcastically murmured under my breath. “Why wouldn’t you wear every bit of jewellery you have ever owned through a metal-detecting device?”

“Good call on garnishing your look with a cowboy belt and Doc Martin boots fastened with copper wire. That trench coat with every pocket full of food is pure genius too.”

“Who said you shouldn’t you bury your boarding pass you were handed 15 seconds ago at the bottom of your carry-on?”

“That’s right, they’ve definitely given away your ticketed seat, so you better start standing around to board now.”

“Immigration control is one hundred per cent the best place to start a phone conversation…‘excuse me, it’s your turn. Excuse me…’”

And there’s you thinking they were only sardonic flights of fancy. Bet you didn’t think they’d be snottily derisive as well? I’m not saying I like the person I become, but to me the airport process is so obviously hassle-free anyone who sees or makes it otherwise is up there with the majority of YouTube commenters: first-class dullards.

The transport building authorities are not trying to trick you. They want you in and out of their establishment as soon as humanly possible. More passengers mean more revenue, so when they say ‘have your passports ready,’ do it and everything will be far slicker.

Here are a few other tips, which can streamline the journey for you and those around you:

• Don’t wear a belt. If your trousers are too big, wear smaller trousers.

• Try to wear slip on shoes.

• Whilst stood in the security queue, put your wallet, phone, keys and loose change in a coat or your carry-on that will be scanned. Take out your laptop or tablet at the same time.

• When your tray emerges from the X-ray machine, pick it up and move away from the line before reclaiming your possessions.

• Keep your passport and boarding pass together in a dedicated pocket or bag compartment.

So ends the public service announcement from Grumpy Getaways. Thank you for your attention.

David is an avid traveller, given a chance, he’s off