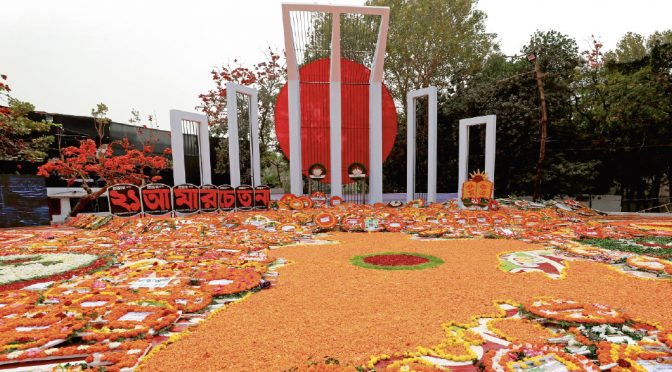 For most people around the world, yesterday must have been just another day.

But, for many people from the Indian sub-continent and even here in the Gulf and elsewhere, it was, however, yet another reminder of a triumph over tragedy that took place more than six decades ago and one that still rankles.

For those who take a slightly keener interest in languages of the world and one’s own, it was a day to hail native speak as the world celebrated the International Mother Language Day (IMLD). First announced by UNESCO in 1999, the day is marked every year, on February 21, to promote awareness of linguistic and cultural diversity.

But there’s a backstory to it that not many people may be aware of. And to understand that, you don’t really have to be an amateur linguist or a proud speaker of the Bengali language, like me. You just have to be a little proud of your own mother tongue –— the language you first spoke growing up.

It’s the same pride, on the fateful morning of February 21 in 1952, that brought together a group of university students in Dhaka, the then capital of East Pakistan. The rallying call for the group that mostly had students from Dhaka University and Dhaka Medical College was just one — an official status for Bengali, the language they spoke and understood and romanticised. That Bangla, as it is known by its native speakers, be made the ‘State Language’ besides Urdu.

However, when chaos broke out, the police opened fire killing several people including — now what is well documented — a nine-year-old boy named Ohiullah. When the news of that bloodbath spread, the entire city went into a state of mourning and virtually came to a standstill. There were more deaths the following day as further protests and processions took over the city and unrest continued, but the language revolution got the impetus it needed.

The language crusaders continued their struggle for another four years until 1956 when it finally saw victory with the Pakistan Constituent Assembly adopting both Bengali and Urdu as the national languages of Pakistan. Seven years later, in 1963, a permanent memorial was raised replacing the structure hastily erected at the spot where students had been killed in 1952.

More than 66 years since the massacre, the Shaheed Minar or the Martyrs’ Memorial continues to light up a modern and Bengali-speaking Dhaka’s evening darkness to this day — serving as a stoic reminder to its people of a bloodied and a hard-fought conquest that is now celebrated once every year internationally and will be for years to come.