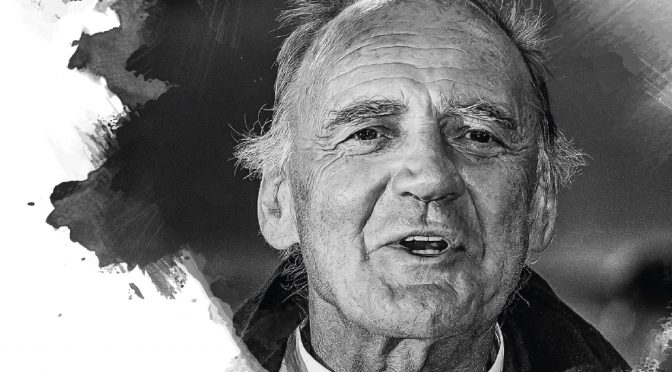 Very few humans in modern history perhaps are as notoriously infamous as Adolf Hitler. In fact, the very mention of his surname alone evokes feelings of fear. But in the world of cinema, portrayals of the Nazi dictator are often exaggerated and even satirical.

Just check out Charlie Chaplin’s peace-loving version of the leader in The Great Dictator or Martin Wuttke’s version in Quentin Tarantino’s Inglorious Basterds; a version of Hitler that uses the ‘angry German’ trope. But among the many films and actors that gave life to Hitler on the big screen, nothing comes close to Bruno Ganz’s 2004 film, Downfall.

The late actor’s version of Hitler is regarded as one of the most well-rounded and highly considered portrayals of the Nazi leader. In fact, it is so apt that a snippet from the film is reused time and again as a reaction piece to current events; more on that later.

Let’s talk about Ganz for a moment. Born on March 22, 1941, Ganz’s career in the German film industry spanned over 50 years. Despite being Swiss, he often starred in German films such as Der Amerikanische Freund (1977), Nosferatu the Vampyre (1979) and Der Himmel über Berlin (1987), films which have gave him widespread recognition. Ganz passed away on February 16 at his home in Zurich, he was 77. But what he left behind is one enduring piece of cinema history – his portrayal of the German leader.

Playing Hitler was no easy task. In a column for the Guardian, Ganz described the tremendous effort he exerted for the role. “I did four months of research. The producers sent me a tape, secretly recorded in Finland in 1942, with Hitler’s natural voice, not the screaming orator we are used to listening to, but a soft, attractive voice, a calm baritone. I tried to capture that.”

He also wrote about being fascinated by the workings of a heartless man and his relationship with his people. “The relationship between him (Hitler) and them (Germans) was almost religious.”

“He had no pity, no compassion, no understanding of what the victims of war suffered. Ultimately, I could not get to the heart of Hitler because there was none,” Ganz said.

When Downfall was released in 2004, audiences were shown a madman on the edge. The film chronicles the last days of the Nazi regime as Hitler and his closest associates are cooped up in a bunker in Berlin. Inside, we see how Hitler and his cohorts try to prevent the impending threat of defeat. They talk about the Allies on one side of the map and the Soviets on the other. Outside, the Nazi front continues to collapse and this fact doesn’t penetrate the walls of the bunker nor Hitler’s skull. The film shows how the dictator’s rationale turns from relying on armies that do not exist, to weapons that are impossible to make, to blaming everyone but himself for the country’s fall.

Throughout these scenes, he is shown not as a perpetually angry man shouting ‘Nein nein nein’, but as a calculated evil leader. One example of this is when he and his generals are shown discussing the Eastern Front. One of the members of his team tells Hitler: “What about the 100,000 young German officers on the Eastern Front? They are going to die.” To which he nonchalantly replies, “They are born to die.”

Apart from the direct confrontations with Hitler’s ways, Downfall also effectively shows how the leader influenced others. In a scene in the film, Hitler is shown conferring a Nazi award to Magda Goebbels. She is shown breaking down in tears, as if she were receiving a Nobel prize. In another scene, devoid of the dictator’s presence, a group of children man an artillery position to defend their city. An adult is shown trying to knock some sense into them, but all the kids respond by saying they are honoured to fight for the Fuhrer.

Today, Ganz’s performance is heralded as a tour de force. Even the historian who wrote the book on which the film has been based on, commended his acting. “That really is Hitler,” Joachim Fest told The Washington Post. Ganz’s acting has become a viral Internet meme. In one scene, Hitler is shown losing control and launching into a verbal tirade against his generals as the circumstances get out of his control. His rant has now become a reaction to everything. A YouTube channel called ‘Hitler Rants Parodies’ has versions of this scene with Ganz (as Hitler) reacting to everything from the recent US government shutdown to the Cambridge Analytica Scandal and even the Tide Pods challenge.

One of the most recent uploads on that channel is Hitler being informed that Bruno Ganz has died. Unlike past reaction videos, this one doesn’t have subtitles and just shows Ganz in various characters. It’s a touching tribute to the man and his passion for performance. His portrayal of Hitler is a masterclass on bringing a subtle kind of evil onto the silver screen, something that endures today.

If you need one more reason to watch Downfall other than Ganz’s stellar acting, then just look at the ideas his character has spawned.  He used rhetoric to pin the blame “ make Germany great again”. If that statement sound eerily familiar to today’s global political climate, then you need to be reminded of where that idea first came from.