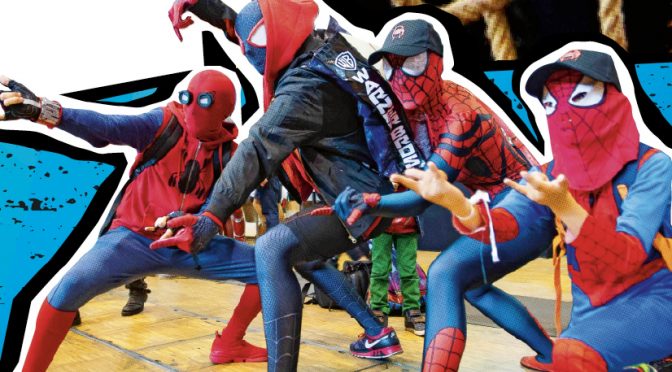 Deadlines have become an integral part of my life — as a writer and as a cosplay enthusiast. It is an exciting challenge, a bit masochistic in its own way, but never did I imagine I would adopt a hobby that would leave me in fits of stress and anxiety.

As I tap away at my keyboard, my mind is currently split into several streams of thought — how do I draft this cosplay-dedicated article (on time)? Did I have a food review pending? How much do I have left to sew? Has Tomoe (my fat cat) broken into the food dispenser already?

To ordinary people, the three-day Middle East Film & Comic Con that kicked off yesterday at the Dubai World Trade Centre, is just a gathering for lovers of pop culture, but to me, it’s a pilgrimage where I shed my shy personality and take on an alter ego as a cosplay enthusiast.

I’ve had the whole year to prepare, but just as most cosplayers, I procrastinated. April seemed far off and I’d assumed (just like every year) that I would have enough time to select a character, draft a pattern, sew it and ready the props. But here we are. I’m at my wit’s end, dreading if I would be able to put two pieces of cloth together to make it look like a respectable garment.

Well, I’d like to blame it on indecisiveness. Pop culture is so vast that there are tonnes of characters to bring to life. My interests lean more towards Far East personalities, and I have a difficult time choosing a cosplay to work on. Often I find myself debating if I want to go through the trouble of building an armour (cue Saber Alter at MEFCC 2017), or opt for a simple fabric-based ensemble (like Olminu at MEFCC 2018).

Over the months, I reviewed my long list of favourite characters and managed to narrow it down to five potentials by December 2018, but all that was for naught because the latest set of anime series dawned upon us (Thanks, winter season 2019!)

Still, I man up and settle on two characters for Friday and Saturday — Raphtalia from The Rising of the Shield Hero, and Miss Joke from My Hero Academia. Done. That sure took six months. Now over to craftsmanship, which my carefree attitude delayed until February. Luckily, I’d managed to place an order for the right shade of wigs from an online store via snail mail, saving oodles on shipping costs. With that sorted, it was time to focus on the actual outfits.

Miss Joke’s outfit seemed simple to put together at the time, so I started with that. Her top was a generic black tank top, while the orange-green bottoms were akin to a jester’s. But what threw me off-guard were the details required to recreate those shorts.

With zero professional experience in sewing, I did what I do best when preparing my projects — follow random online tutorials and hope for the best. My shortcuts are indeed any seamstress’ nightmare, as I shamelessly defy the rules of pattern-drafting and sewing techniques.

For Miss Joke’s shorts, I found an easy tutorial for bloomers in order to get that balloon-like appearance. Unfortunately, it wasn’t until I’d finished sewing the parts together that I’d noticed that the two halves of the shorts were different colours. Imagine my horror, as I’d quickly reached for the seam ripper to undo the tightly-weaved threads.

Once done, my next challenge was the stripes. What could possibly go wrong, eh? Well, a lot. Besides finding it hard to slice identical pieces over my self-healing mat, the threads would bunch up in the sewing machine because I’d picked the wrong fabric to work with. Cue, self-loathing.

I needed a break. It was indeed a long break, as I resumed my progress just two weeks ago, obsessively fixing the stripes, hemming the bandana, prepping the corset out of felt and craft foam, and painting her wrist bracelet. Okay, now what? I still have the boots to finish. Well, that sums up my Saturday. But wait, I still had my main Friday cosplay pending; a whole new character to pour blood, sweat and tears (and money) over. I gasp!

To date, I have a partially sewed glove, uneven hems and a table full of adhesive strings and an explosion of stray fabrics. Welcome to my world of deadlines and cosplay doom. I think I need a vacation.