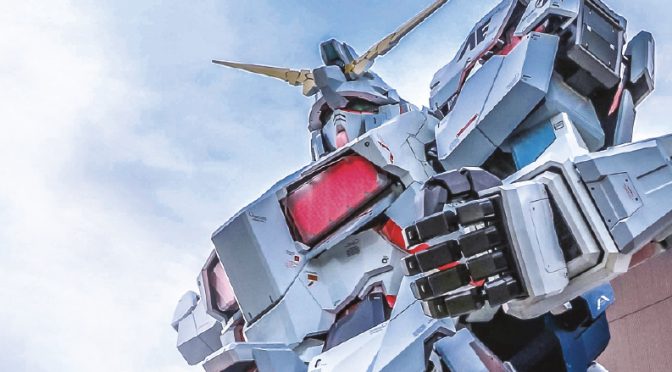 Here’s a riddle: What’s red, white and blue, saves the world from oppression and is utterly gigantic. No, it’s not America. It’s Gundam — a term for giant robots who towered over television screens and were piloted by select humans who used them to fight tyranny. Gundam first came to life four decades back — on April 7, 1979 — with the release of the anime show Mobile Suit Gundam. Japanese network Sunrise is credited with the creation of the series which now boasts hundreds of spin-offs.

The shows revolve around a similar plot. They are set in different generations – in a hyper-futuristic Earth where war is fought with giant robots called ‘mobile suits’. The battles are not limited to the ground and are set in space too. Think Star Wars except the George Lucas saga should have had robots blasting each other instead of X-wings and TIE Fighters.

Mobile Suit Gundam follows the story of Amuro Ray – a civilian engineer who pilots the RX-78-2 Gundam to defend his home colony when a band of Zeon forces (the baddies) attack it. His skills are then recognised by Captain Bright Noa who takes him into the Earth Federation to fight Zeon. As a Federation pilot, Amuro develops a rivalry with Char Aznable – an ace pilot among the Zeon forces. The rivalry reaches a fever pitch when they engage in a fierce battle which ends in a stalemate. Today, the fates of the two characters remain unknown.

“The very first Gundam series that I saw was Mobile Suit Gundam Wing. I remember watching it after school and singing along to the theme song,” said Catnipkilledthecat, a Dubai-based artist. He also shared that one of his favourite things to do as young lad was copying a signature move from another series in the franchise – Mobile Fighter G Gundam. “G Gundam remains my favourite because it had this signature move that me and my friends acted out in real life. We would come together and shout ‘Shining Finger!’ to depict one of the lead robot’s signature moves. It was great because we imagined our hands were burning as we fought the baddies.”

During those years, my morning ritual involved asking my grandmother to wake me up at 7am, every Saturday, so I could watch the latest Gundam episode. Clutching my glass of chocolate milk, my mornings would include robots flying across space and shooting lasers all while preaching about the triumph of peace over discord. I also admired the different mobile suit designs such as X-103 Buster Gundam, X-207 Blitz, ORB-01 Strike Rouge and the X666S Legend Gundam. This interest in robot design was satiated by a hobby called Gunpla.

Many enthusiasts, like myself and Catnipkilledthecat, begin with watching the series first and then get into Gunpla. But for Qais Sedki, managing director of Otaku Middle East, it was the other way around.

“Back when DVD was a pretty new innovation, I was building my collection of discs. I was shopping for DVDs when one of the staff at the store recommended Mobile Suit Gundam Wing to me. He spoke highly of the show. I ended up buying it and at first I didn’t enjoy it. Though I did enjoy its follow-up movie Gundam Wing: Endless Waltz. After that, I was completely immersed into the franchise by way of building my first Gunpla kit.

Gunpla is one of the lasting legacies of the Gundam anime franchise. The word is a portmanteau of the words ‘Gundam plastic model’. These are snap-on modelling kits made by Japanese toymaker Bandai. The kits are based on robot designs from the show, so if you ever want to own your own RX-78-2 (affectionately called Grandpa) here’s your chance. But it’s not only robots from the original show mind you. With every new Gundam show comes a new line of modelling kits. Case in point, to coincide with the release of Gundam Build Divers last year, Bandai released a line of kits based off the mobile suits from that show.

In the UAE, Qais is the founder of one of the first and largest stores offering these kits as well as experiencing how to build one firsthand. OtakuME traces its roots back to the Middle East Film and Comic Con in 2012. “When I built my first kit, I shared every step of the build process on my Twitter. When I saw people were interested I had the idea of selling some of these kits to share the joy of building with everyone. During the second Comic Con I was selling my own manga (Japanese comic book) and a handful of model kits, they both sold out.”

This year, they will return to Comic Con to raise awareness of building these model kits among UAE residents. “Comic Con is essential because it raises awareness for these hobbies. And since it’s a family event, both adults and kids can easily get into Gunpla and learn more about the anime series,” he said.

But it was something that Qais said that stuck with me: “I think why Gundam continues to endure even after 40 years is because of its closeness to reality. When Gundam came out, it was a more realistic take on the robot. It was based on the idea of ‘What if this existed?’ and the series reassured that throughout. Each mobile suit had specific measurements and weights and even mechanics based on reality. It’s that closeness to realness that kept it alive. Maybe one day we’ll have an actual mobile suit.”

I too hope so Qais, and hopefully we won’t need to wait long. Over in Japan’s Odaiba island stands a 1/1 scale, 72-feet tall statue of the RX-0 Unicorn Gundam. The statue also has a skeleton which lights up with bright LED colours at night. It is hidden behind armour plates which move to expose parts of the skeleton.

Urban legend has it that during times of crises, the robot will suddenly move and join the fray. Only time will tell when it will join the battle.

Keith has an unhealthy affinity towards the mobile suits the bad guys use – they just look cooler.