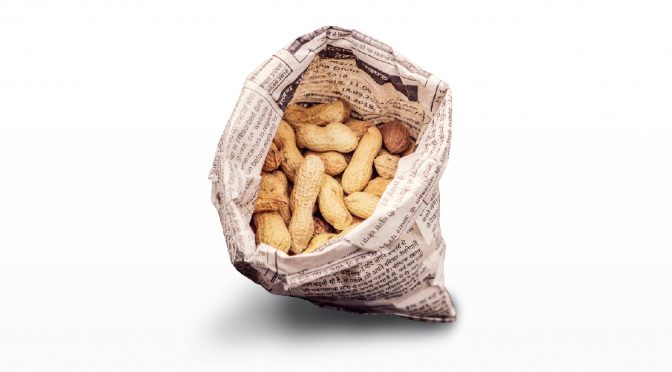 A journo pleads you spot her name under the articles, as you unwrap the fish, eat the peanuts and put the trash away.

My experience of settling scores with one of my senior editors, who I worked with in the ’90s, goes like this. Once, I had the great privilege of eating oily ‘bhajias’ (fritters) wrapped in the very newspaper I worked for that had his byline (a name indicating the author of a story) on it. I crunched the paper (with his byline) with vengeance and dumped it into the dirtiest bin around, next to a stinking gutter, with a massive sense of elation.

I held this memory very dear to my heart until last week. My clothes had just come back from the laundry, neatly folded and ironed. But when I opened the packing, I was in for a rude shock. The laundry normally uses newspaper to avoid the clothes from creasing and this time, it had my byline screaming at me.

Needless to say, I was disgusted and angry. I blamed the whole mankind for not valuing my wisdom and intellect that I so willfully imparted to my readers to enlighten them, inform them and for what? To see my byline, go into the trash!

It made me question and analyse the entire journey of my byline.

I work very hard for my byline; those of you who know me will probably agree with me. Even after having worked in the industry for over two decades, one thing that I treasure most is my byline. The only incentive a journalist perhaps delights in after putting in all the diligence and rigour on the table is seeing his/her byline.

I started my journalism career when, thankfully, the internet was just about to encroach on print space and us journalists had to work ceaselessly and seamlessly towards our byline. The byline was strictly the editor’s discretion and no one had a say or could dispute it.

Confession: A byline makes or breaks a journalist. For people who are not from the media and who have never worked for a newspaper, please understand that a lot goes into the writer’s name. For a reader, it is only a compilation of a few paragraphs and frankly, except for scribes and public relation agencies, no one cares about who has penned an article.

A responsible and honest journalist or reporter carefully weaves every word into his/her work so that they don’t lose the message that’s supposed to be conveyed. The reporter can have a few privileges when reporting a piece of breaking news without paying attention to sentence construction, paragraphs or right punctuations since the news supersedes everything. However, such occasional aberrations do not change the fact that your byline defines you and builds your profile in the minds of the readers.

I have covered commodities for The Economic Times (ET) which then was not so glamorous, yet I learned the ropes and yes, I enjoyed it thoroughly. I distinctly remember a fellow journalist even commented: “Kab tak daal, aatte ka bhav ka record rakhegi?” (How long will you keep a record of the prices of rice and pulses?) I had to maintain a record of the prices of various commodities on an everyday basis to write my daily market reports based on Consumer Price Index (CPI) and Wholesale Price Index (WPI), the most important indicators to understand inflation in any economy.

However, since these subjects were staid, my byline languished on the ‘Markets’ page, the second last page of the newspaper. Moreover, the print was so fine that even termites would refuse to acknowledge me and pounce on the newspaper. After having a solid stint at ET, I moved on to a commodities portal and there, though I could use my byline for every story, the desire to see my name in big bold black font remained unfulfilled.

The sheer challenge to wake up and work towards your original story and in the evening, when the editor whets it and at the end, finally types the reporter’s byline: that’s the end of a day’s journey. This would allow us, mortals, to breathe for the next day and let us bask in the glory for a day.

Yes, a byline brings glory for a day to a journalist and it ends, as night sets in and you rack your brains on what you should write next to see your name again. Every word you write defines your personality and your personal choice.

At Khaleej Times (KT), I got the opportunity to write on a range of issues and explore different areas of reporting. Apart from business, I have also tried my hand, literally, at cinema, food, information technology and subjects that touch the commoners.

As the internet deepened and widened its reach along with social media — where apart from original posts, most users are busy garnering reshares, retweets and likes — access to information became easy as long as you knew where and what to Google. The journalist now prefer tagging their social media posts and bylines have reduced their name title to a mere social handle.

I remember when I first saw the content curation by a young journo and taking a byline for it; I was appalled as to how can anyone be given a byline by merely compiling different stories verbatim? Times have changed, perhaps, and so has the definition of a byline. But I still belong to the era of conceptualising my ideas and I love to see them manifest in the newspaper, all for a precious byline.

We, at KT, regularly get calls from PR agencies and ill-informed executives who have the gall to say: “I have an exclusive write-up for you, which you can publish by putting your byline.” I am sure by now — having read this piece — you can imagine my spontaneous reaction to such audacious requests.

So, the next time you find anyone’s byline on a sheet of newspaper used to wrap clothes, sanitary ware, fruits or vegetables, just remember that somebody put all his/her heart and soul to earn it. Just be kind… the byline deserves it!

As for me, let me get back to the desk and ponder over the next topic to earn my byline.

Sandhya relishes street-side food just as much as the words on the newspaper it comes packed in.