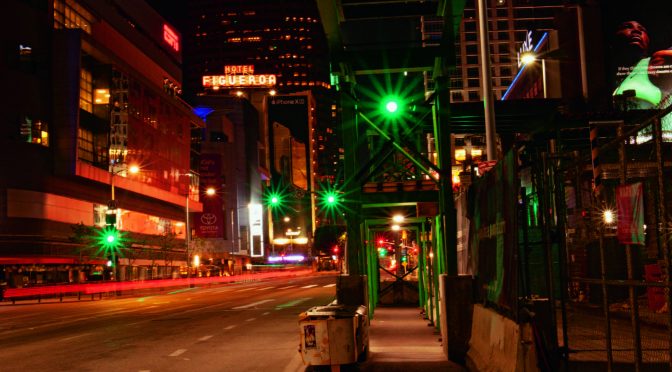 When you’re in sunny California — the land of Hollywood, hippie counterculture, fast food, and the birthplace of the Internet — there’s very little not to love. Yet, I did not possess my wanderlust spirits at nighttime. Thanks to mainstream American media, I have to admit: even smiling, friendly faces became menacing scowls to me after the sun set.

When my dear friend and LA resident, Daniel Vargas (Danny), suggested we walk back home from Chinatown in Downtown LA one night, I only grudgingly agreed. It was 10pm, and our home was more than an hour away. My second travel companion was new to LA and almost as paranoid as I was. But Danny — a proud Mexican-American freelance photographer who also works at the ‘Tacos tu Madre’ eatery in 1824 North Vermont Avenue (he’d bring home the best burritos I’ve had in my life, and talk about how actor Natalie Portman stopped by the shop that morning) — insisted it would be fun.

LA seemed like a dangerous beast at night, with its streets bathed in a murky orange glow. But trusting Danny to keep us safe if things went south — he had spent most of his life in the city after all, with the exception of the two years he’d spent with the US Marine Corps in Okinawa, Japan — we began trudging along behind him, as he pointed out some of Downtown LA’s iconic skyscrapers, providing a little backstory to each glittering landmark.

“I was born in LA and stayed at the Pueblo Del Rio housing projects with my mother and sisters for 5-6 years,” he recalls, incessantly tapping away on his smartphone, looking for rare Pokémon on the Pokémon Go app, as we walked. “We stayed here long enough to experience the LA riots in 1992 and moved to the Westside in the fall of 1994 to the Mar Vista housing projects. In those days, the area was saturated with gang violence, thanks to Culver City Boys, Venice Shoreline Crips and MS-13,” Danny shrugged, as we walked past some of Downtown LA’s most iconic buildings.

I asked him if a lot of LA had changed since his growing up years. “The areas with the most noticeable change have been Echo Park and Downtown LA (DTLA), as it used to be a predominantly Latino area.” Pointing at the Grand Central Market, he added, “Most shops and stands were run by Mexicans or Mexican-Americans. What really caught my attention after returning from the military was the dwindling Latino presence.” As we walked past the market and turned right between Broadway and Hill, he noted, “DTLA wasn’t as safe as it is today though. Many of the buildings were abandoned, and drug pushers and addicts roamed the streets after sunset.”

As the night progressed, our walk and talk got progressively more interesting, as Danny recalled some of his more terrifying memories of growing up in the city, having lived through both the 1992 riots and 1994 earthquake. “During the LA riots, my mother kept us indoors for the entire duration of the ruckus,” he said. “We slept on her bed, while she slept with a machete within an arm’s reach.”

As for the earthquake, though it claimed 57 lives, Danny noted it was also a time when people came together. “Outside of the intense shaking and the loud, grinding sounds, I saw my community keep their differences aside and band together. Men scrambled around pitching tents, shutting gas/water valves, whilst women rummaged for blankets and perishables.”

LA’s infamous ‘homeless neighbourhood’ Skid Row was now just a block away. Sensing our fear, Danny said, “They are not going to bother you. Just be yourself.” I asked him about police violence and city-wide racial tensions. “In the ’90s, we had a governor introduce the California Proposition 187 to establish a state-run citizenship screening system and prohibit illegal immigrants from using non-emergency healthcare, public education, and other services in the State of California.”

People marched, protested, and created murals in response to this rhetoric. “One infamous incident involved a group of immigrants being beaten on live television — the officers involved were acquitted of any crimes. This was also the case for the Rodney King beating. This proposition became a flagship, of sorts, for Anglos to stand behind and spew their ignorance towards brown communities,” he grimaced.

Did this change the city’s art identity? “Well,” he replied, “as I came back from my service in the late 2000s, I saw how many of these neighbourhoods were accommodating a large influx of trust fund kids and privileged artists mostly from the East Coast, who want the experience of starving artists or street culture, but from a safe distance. This can be seen in areas such as Venice Beach and the Arts district in DTLA. Much of the art isn’t representative of the people once prolific within the area. Today, a lot of the art seen around the city is regurgitated pop-culture ideologies. Instagrammable social art.”

Though Los Angeles has its pockets of territorial identities, Danny felt Mexican and Chicano identities would always be present in the city. “Maybe not as prominently in certain areas, but definitely in neighbourhoods such as Boyle Heights and Pico-Union. We’ve become the ground on which others can lay their foundation over, much as the Spaniards did all across Latin America, imposing ideologies and lifestyles to force out our presence,” he said, our nocturnal adventure ending on a sober note as we got home.

Danny took us on several other night-walks after that, helping us experience a side of the city that we would probably never have ventured into otherwise. Danny does have a word of caution for anyone wishing to venture on a such a stroll: one must be aware of the surrounding tribe. “As in other cities around the world, there are rules by which one has to unofficially abide by, when entering someone else’s backyard. It always helps to be mindful of what, and who, reigns behind the curtains.”

When Dhanusha is not running after her Labrador, she’s busy attempting her 100th weight loss plan