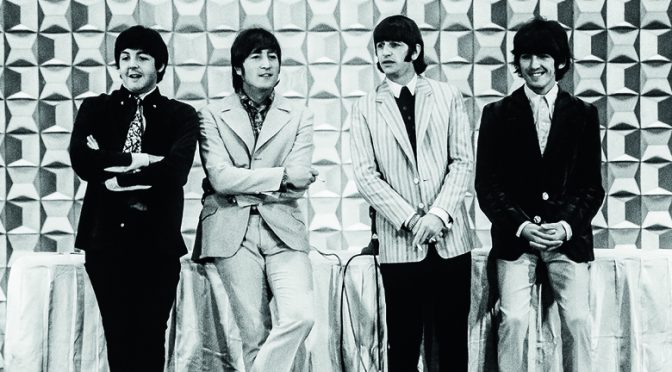 John Lennon’s son — Julian is in Manila. His visit is arguably the first time a Beatle or their relatives returned to the country after the Fab Four was unceremoniously kicked out of the country back in 1966.

On March 31 this year, the Ninoy Aquino International Airport (NAIA) in Manila welcomed one interesting traveller. Like his father’s departure from the Philippines in 1966, he was carrying his own bags and went through the airport like everyone else. The only difference? John Lennon was kicked out of Manila; his son Julian, went for a visit.

The recent news of Julian Lennon, the son of the famous Beatle made headlines in the country. His posts on Instagram, documenting his holiday; portray a grand time. He visited the Old City of Intramuros and flew to the white sand beaches of Boracay. He even highlighted a juice bar the name of which was a spin on his dad’s name – Johnn Lemon.

News coverage of Julian’s visit wasn’t just because of his celebrity status. His visit touches upon decades of history between the Fab Four and the Philippines that is home to a lot of Beatles fans – yours truly included. It was a watershed moment because Julian’s trip was the closest any of the Beatles got to returning to the country after their brush with a dictator and his supporters in 1966.

The story of the Beatles’ Manila concert is rarely told. The story goes: When the band stepped on Philippine soil on July 3, 1966 they were hurriedly escorted by armed men to a yacht where they spent the night. According to Esquire, the security in Manila International Airport (NAIA’s name before) was bigger than what then US-president Eisenhower received when he became the first incumbent president to visit the Philippine capital. Oliver Reyes wrote: “At least 2,000 security forces were assigned to protect the Beatles upon arrival. The security preparations for the arrival rites were said to be unprecedented in the history of Manila.”

The armed men – who were actually cops in plain clothes, escorted the band to the headquarters of the Philippine Navy for an impromptu press conference. The catch here was that when the band was being ferried off to the naval base, they were separated from their managers – Neil Aspinall and Brian Epstein. Aspinall later described the events: “The army was there and also some thugs in short-sleeved shirts over their trousers and they all had guns. These guys got the four Beatles and stuck them in a limo and drove off and wouldn’t let them take their briefcases with them. So, while the confusion was going on I put them in the boot of the limo that I was going in and said: “Take me to wherever you’ve taken the Beatles.”

After the press conference, the Fab Four was escorted by the military to a yacht which belonged to a certain Don Manolo Elizalde – a local industrialist. Decades later, George Harrison would recall the scene in the yacht. “It was really humid, Mosquito City, and we were all sweating and frightened…[N]ot only that, but we had a whole row of cops with guns lining the deck around this cabin that we were in. We were really gloomy, very brought down by the whole thing. We wished we hadn’t come.” Thankfully, Epstein was able to catch up with the band before the yacht set off. After staying off the coast for a couple of hours, the Beatles and Epstein were returned to the marina where they checked in at the Manila Hotel. It was 4am.

The morning of July 4, 1966 was when things started to change for the band. After a rough night on a yacht they were shoved into, security staff came banging at their door. The band was confused. Unbeknownst to them, they were slated to perform at a social gathering at the Malacanan Palace – the Philippine seat of power. Not only that, the gathering was hosted by then First Lady Imelda Marcos, wife of dictator Ferdinand Marcos. The Beatles were never informed of this development despite the visit being published in local newspapers. On top of that, Beatles historian Steve Turner also wrote that Epstein had already declined the invitation months earlier.

Esquire wrote that Epstein would later claim, “The first we knew of the hundreds of children waiting to meet The Beatles at the palace was when we watched television earlier this evening [of July 4].”

Behind the doors, the Beatles were wide awake and confused as to what was happening. When they turned on the television, they saw what the commotion was all about – they were a no-show at the presidential palace despite Paul McCartney recalling what Epstein did; they had said no. Outside, the staff knocking at their door had grown to include local police, the constabulary and a captain of the president’s security detail. They all left past noon without the band in tow.

Later that day, the Beatles performed their scheduled concert at the Rizal Memorial Stadium. Over 80,000 fans attended what would be the first and last time any one of the Fab Four would perform in the Philippines. Pepe Diokno, writing for the Philippine Star said that it was the largest audience to see the band in a single day.

During the concert, Epstein took it upon himself to issue a statement and an apology to the First Lady for the faux pas which occurred that morning. He approached the state-owned TV-5 network for his apology. But the damage had been done, an invisible hand cut off the audio and Filipinos never got to hear what Epstein had to say. In a perfect world, we could have accepted the band’s apology. It was something that was coveted from us.

The horror began right after their concert. According to Esquire, the Beatles left the Rizal Memorial Stadium sans police escort and all the VIP privileges that they were given yesterday. Gone were the guards to take them to their limousines. The band had to take themselves to their cars and they were jeered at along the way. Several troublemakers insulted them in the vernacular tongue until they sped off and went to the hotel. This was the wrath of the Marcoses.

On July 5, the Beatles faced the full force of the Marcoses’ control over the country. That morning, all the staff at the Manila Hotel mysteriously disappeared. No one was there to attend to the Fab Four. When someone finally came, he declared that there would be no more room service to the band. All leading newspapers that day told the same story – the Beatles snubbed the First Lady.

As they checked out to the hotel, the Beatles had to carry their own luggage from their suites and load them into their cars. Epstein was concerned that Marcos’ invisible hand could also force their flight to depart without them. To this end, he called up the pilot of KLM flight 862 bound for Delhi and pleaded him not to leave them in the Philippines. The pilot agreed.

Enroute to the airport, John Lennon described the scenes: “All along the route to the airport, there were people waving at us, but I could also see a few old men who were booing us. There was a group of monkeys, you can’t call them anything else, waiting for us as we were to fly out of the country.”

At the airport, the band was met by a group of youth and elders led by the owner of the Manila Chronicle – a state-owned newspaper. The group came to the defence of their First Lady as they shouted the Beatles out of the country. The Fab Four went through the notions of airplane travel but with the added challenge of escalators refusing to work, airport staff not helping them and immigration staff doing what they can to stall the band. All this as the mob of haters harangued them until they reached their flight.

The leader of the angry mob, Dayao, later reported that the Beatles were punched, kicked and even spat on. Aspinall recalled: “It was very, very scary, and nothing like this had ever happened before — and nothing like it has ever happened since.” The moment they reached the plane and took off, the band let out a sigh of relief, the Marcosian nightmare was over.

Harrison would later remember the events in a 1986 interview: “He tried to kill us, President Marcos.”

In a way, Julian visiting the Philippines could be seen as poetic justice. While his father and co. faced the invisible hand of the Marcoses back in the 1960s, Julian had a ball of a time seeing what the city had to offer from cityscapes to beaches. And I’ll agree with that comment on reddit – this was indeed the closest any of the Beatles ever got back to Manila.

Keith could go on for days about the Beatles