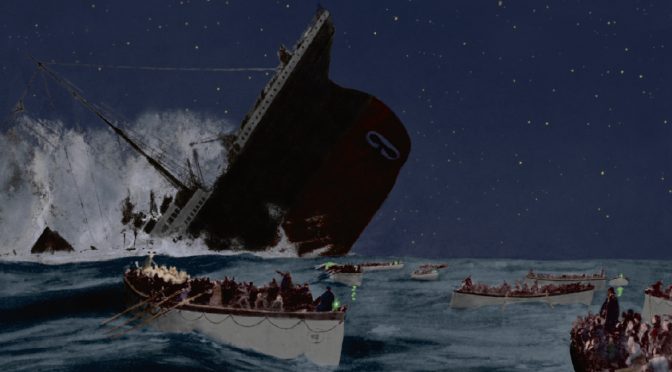 On April 14, at approximately 11.40 pm, the RMS Titanic struck an iceberg. The ship had been designed to stay afloat if four of her forward compartments flooded, but the glancing blow she received opened up six. The result was a night of chaos and horror as the crew attempted to help passengers into lifeboats, knowing full well there weren’t enough. Two hours and 40 minutes after striking the iceberg, the grand ship disappeared into the North Atlantic Ocean, as chilly temperatures of -2°C killed most passengers and crew still on board within 15 minutes.

It’s also on April 14 that I walked towards the rather ominous-sounding Titanic Quarter in Belfast. Being there on the very same date that the ship sank was a matter of sheer luck or eerie coincidence, but I was determined not to let it go to waste. Today, the Titanic Quarter in Belfast is a chic stretch of land, with film studios, apartments and educational facilities. It also houses Titanic Belfast, a visitor attraction that sits exactly where Harland & Wolff  — the company that built the Titanic — was once located.

“When they first opened up the Titanic Belfast in 2012, there were a lot of jokes being made,” a local told me before I made the trip. “People asked why we wanted to celebrate a ship made in Belfast that eventually sank. But then the answer that always comes back is ‘she was just fine when she left Belfast!’”

As a building, the Titanic Belfast is impossible to miss. It’s obvious that its angular shape is meant to bring to mind the bow of a ship. Ironically though, from some angles, it looks like an iceberg — and so, that has become its nickname amongst locals.

I bought a ticket to the visitor attraction but eschewed the audio device, preferring to wander around and experience the galleries on my own. I had expected it to go straight into the topic of ‘the unsinkable ship’ but instead, Titanic Belfast went right to the beginning — to Bloomtown Belfast, depicting the state of the city at the time of Titanic’s construction. You get to learn that a famine caused more people to move to Belfast to find work and that the city’s population grew from approximately 87,000 to 349,000 between 1851 and 1901. Of course, crowded cities don’t pave the way for great living conditions — back in the day, poor housing standards and a diet of ‘tea and bread’ were common.

It then moved to industries that became popular at that time — linen, ropeworks and shipbuilding — as well as providing an insight into the life of dockworkers (“accidents such as falling into the river or being crushed were common”). Finally, it’s time to learn more about the launch of the Titanic into Belfast Lough. In a room directly overlooking the slipway from which the Titanic was launched, I read about how approximately 100,000 people turned up for the event on May 31, 1911, never imagining that ‘the pride of Belfast’ would sink on her maiden voyage.

‘The Fit-Out’ exhibit showcases how the ship would have appeared to passengers and crew — and this is easily one of the most haunting sections for me. Seeing the luxurious beds, compact sinks and berths — recreated perfectly and placed behind glass — I couldn’t help but imagine that someone had slept on a similar bed that fateful night. The fact that it was a recreated model and not the original did little to ease that feeling.

But the eeriest part of the exhibition was, without a doubt, the aftermath of the sinking — the widespread media frenzy to get stories of the ship, the lack of information that led to conflicting rumours of Titanic’s fate, and the survivors’ stories. Of the estimated 2,224 passengers and crew on board, only 706 survived. This fact is all the more tragic when you learn that the lifeboats could have accommodated more people but, due to mismanagement and chaos, were launched partially empty.

In between the doom and gloom, there are stories of heroism — of Margaret “Molly” Brown who helped survivors in her lifeboat and on the Carpathia (the first ship to reach the scene of the disaster and pick up survivors from the wreckage); of Benjamen Guggenheim and his steward who dressed in their best as the ship sank, smoking cigars; of Thomas Andrews, chief designer, Harland & Wolff, who was seen helping with the evacuation until the very end. His body was never found.

The last part of the exhibition shows visitors footage of Titanic’s wreck, discovered some 75 years after the sinking, now molted and covered in moss. With the majesty and beauty of the ship having faded, today, the grandeur of Titanic is best described from a line in James Cameron’s epic movie of the same name — “it exists now, only in memory”.