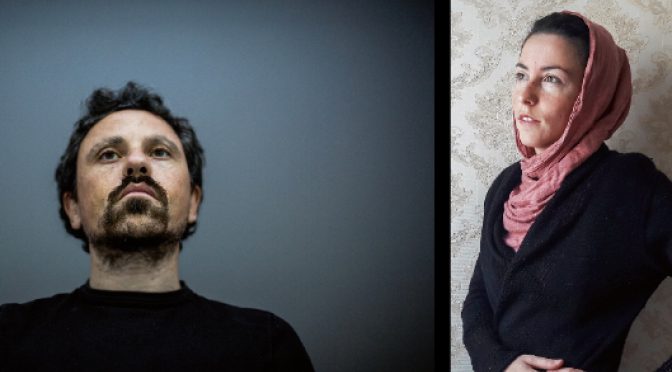 Looking at Alessio Mamo’s bold work, it is hard to believe this award-winning photographer only got started in the profession some seven-eight years ago. Hailing from Italy, Alessio worked as a chemist but confessed he was getting tired of the job. So, when the company he worked with had a crisis and failed to renew his contract, he saw it as an opportunity to “be free to choose his path”. He started travelling, taking pictures and, over time, getting them published. “It made me realise that it was possible to become a photojournalist — so, I put my 100 per cent into that field,” he says.

His journey has taken him all over the world — most recently, to Dubai to showcase the photo exhibition Healing Wounds for which he joined hands with journalist Marta Bellingreri, in collaboration with Médecins Sans Frontières/Doctors Without Borders (MSF), Alliance Francaise and the French Business Council. The powerful photo series, which was displayed in Alliance Francaise in Dubai over the last week, highlights the stories of patients at the MSF Reconstructive Surgery Hospital in Amman, Jordan, which was set up to treat those injured during the Iraq war. Poignant and touching, it sheds light on the people behind the injuries, the horrors of war and the healing power of compassion.

We caught up with Alessio to find out what it took to create the series. Excerpts from the interview:

What got you started with the Healing Wounds project?

Two-and-a-half years ago, I was already in Amman, Jordan. I had heard about the MSF Hospital and knew it treated people who are wounded by war in the Middle East. I knew this was an important story to tell. So, in 2016, I went to the hospital and told them I was interested in their work and that I wanted to do a long-term project. They asked me how many days I want to stay. I laughed and told them I needed months. I ended up staying there for four months.

I would go to the hospital almost every day. We chose 12 patients and proceeded to shoot two pictures of them. One is a black-and-white portrait showcasing them and their wounds. The second is a coloured photograph showing them returning to normal life, thanks to the treatments of MSF.

What was it like interacting with patients? How did you get them to be comfortable with the series?

It wasn’t very difficult because we spent months there. The first few days, I did not take any pictures. I went there as visitors and after a few weeks, I became a ghost to them! Another thing that helped is that I know a few Arabic words. I’d play with the children and they would make fun of me because of my Arabic. This combination of factors was important as it helped build a relationship with them. I’m still in touch with some of them — just a few weeks ago, I went to Iraq where I was hosted by Haidar, one of the patients in the series.

A project like this can be emotionally difficult. Did it affect you?

Initially, it was hard — entering hospitals and seeing the wounded is not easy. But after spending days and weeks with these patients, the wounds start to disappear in your eyes. All you see is the person’s personality.

One of your photos from the series — that of a young Iraqi girl — won the World Press Photo, second prize singles, people category in 2018. What was it like shooting that award-winning photo?

We photographed each patient within their rooms. When I entered Manal’s, she was wearing this mask. It was because she was wounded by an explosion in Kirkuk and had to cover her face for four hours everyday as even the light from the sun could hurt her. Even though I took pictures of her without the mask, in the end, I felt like the mask was part of her story. Winning a position in the World Press Photo was shocking, but it helped give the cause more attention. I remember telling Manal, “You may be living her in a city in Iraq, but your photo is travelling the world.”

What would you say is the message you are trying to portray through these photos?

Honestly, this series isn’t just about the photos but the captions as well. Together, we are trying to tell the stories of the patients.

But, if there’s another message, it would simply be to stop supporting war or the sale of weapons. Wherever war occurs, civilians are the first to get wounded. I also want people to be aware of how well off they are. After this series, when I went back to Italy, I felt angry because people there are spending their lives stressed for no reason. They don’t realise that they have everything. So, be aware that your life is good if you have a job or a decent position. Try to focus on the best parts of your life rather than the worst.