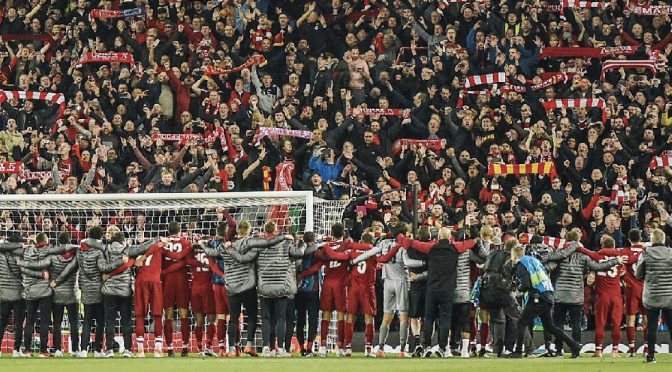 Where does one really start? Where does one really begin after a night like that? Sport, in general, and football in particular, is littered with some great and astonishing comebacks but Tuesday night’s Champions League semifinal second leg between Liverpool and Barcelona will perhaps rank right at the top.

Who would’ve thought Liverpool would overturn a 3-0 first leg deficit against the Spanish giants, who boast of the GOAT — the greatest of all time — the irreplaceable Lionel Messi and a line-up that includes Luis Suarez, Philippe Coutinho, Sergio Busquets, Ivan Rakitic, Gerard Pique and the likes — and ace the second leg.

No one in their clear mind would have dreamt something like this. And if they did, they would have likely have been called delusional.

A long and winding season on the domestic front, where Liverpool are still in the chase for a 19th Premier League crown and their first since 1990, and in Europe, where they bid for a sixth, has taken its toll with Roberto Firmino and Mohamed Salah, who form the attacking triumvirate with Sadio Mane, were rendered hors de combat.

Considering the circumstances, a victory, at best, a win for pride, would have been a more practical and realistic outcome. But Liverpool believed. Anfield believed.

At their fortress on Tuesday night, the Reds produced one of the greatest tales ever seen in football, one that will now become part of folklore.

Perhaps the stars aligned perfectly that night, just about perfectly enough for Liverpool. And if one were looking for signs and a good luck charm, there were a couple.

For starters, Salah, who watched the game from the stands with his wife Magi, wore a tee that read ‘Never Give Up’.

But the greatest inspiration of them all was the presence of a decorated English legend and one of Liverpool’s most famous sons, Steven Gerrard.

Gerrard was at the heart of Liverpool’s greatest ever comeback in 2005 when after being 3-0 down at half-time against Italian giants AC Milan, the Reds bounced back to level it at 3-3 and then went on to win 3-2 on penalties. That Champions League final has now come to be known as the ‘Miracle of Istanbul’.

Back to the night, Anfield roared and the players responded.

The players stuck to manager Jurgen Klopp’s philosophy, which has come to be known as ‘heavy metal football.’ And Liverpool ‘gegenpressed’, harried Barcelona and annihilated the Spaniards.

Virgil van Dijk was as usual a rock in defence, while Mane ran the ground down. Divock Origi and Georginio Wijnaldum, who actually came on for the workhorse Andrew Robertson, will be labelled as the heroes of the night, and quite rightly so too. But in effect, it was fabulous teamwork, the ethos instilled by Klopp, where each one fights for one another.

That was best illustrated when Xherdan Shaqiri was being substituted for Daniel Sturridge as the game at the fag end. The muscled Shaqiri was all pumped up and rallied Sturridge and the fans on, and then got that famous ‘bear hug’ from Klopp.

A heady night it was as the team and staff went to pay tribute to a heaving Anfield and the Kop sang You’ll Never Walk Alone, Liverpool’s anthem.

Truth be told, it was trepidation for this writer as the fixture approached as I’m a fan of both FC Barcelona and Liverpool. There were mixed emotions over both the legs, and I’m glad it’s over now.

I feel sad for Barcelona but the best team won the night. They will be come back from this, but for now, let’s savour and celebrate Liverpool.

Being called the Kings of Europe awaits.

James dreams of watching the Champions League final in Madrid