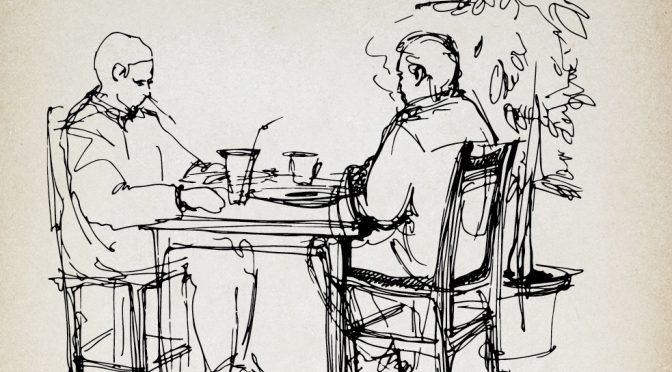 “What’s up?” I asked, as the person on the other end wasn’t one of those guys who would call me for the heck of it. The big chasm between our generations —  a baby boomer and a millennial — doesn’t call for frequent communication. He usually called to clear some doubts or if he had something to communicate about his grandma, the prime reason why he came into my life.

“How is she?” I made my priorities clear.

“She is fine. She just went back to Oman after a small break in India. That’s not the reason I called.”

“Forty-two years went in the blink of an eye. We never had chance to meet,” I sighed.

“Yeah, you lived life in a jiffy. If it was a choice, don’t regret.”

“Being not regretful would be the best tribute to her, given what she had written in my school autograph: Of all sad words of tongue or pen, the saddest are these, it might have been.”

“Leave it,” said the millennial. “I called to invite you for a drink. Come over this Thursday.”

I wondered if he was grown up enough to invite his former university guardian in Singapore for a drink in Dubai. His mum is my favourite English teacher’s beautiful daughter who carried an aluminium school box, a fad among the elite class once upon a time, while none of us could even afford a plastic bag. We used an elastic strap to tie around our books. When everyone peeped over their picket fence to have a glimpse of the charming princess, I knocked on their door to study Wren & Martin. I was in love with the language, rather than the girl.

A few decades later, when I got a call from my teacher asking if I could be her grandson’s guardian in Singapore where he would study engineering, I was more than elated. It sparked off a little tsunami; waves of memories washed over my heart. I never met her in the 40-plus years because I wasn’t ready to accept the fact that my elegant-looking mentor might have grown into a mass of wrinkles. I left memories unperturbed and as sweet as ever.

It was probably the boy’s first trip outside India. At least my wife believed so as we waited at Changi Airport to receive him. We watched in horror as he almost lifted the baggage trolley out of the arrival hall because he didn’t know he needed to push its handle to let it move. The rest is history. The multi-disciplinary course of engineering plus finance took him places. He value-added by working for charities in Europe and Asia, before getting absorbed by a multinational bank and posted in its private equity division in Dubai.

I took the Metro to the Dubai International Financial Centre where he worked and had a table reservation in an upmarket pub. The place was full to the brim with Gen Y. At first blush, they all looked same, with their ties loosened up around the neck. The demeanour was identical as young men and women chatted up loudly while cooling their heels for a seat. A 20-plus guy who came down just yesterday was showing me around a Dubai that was alien to me despite decades of my stay here. A cultural shock.

A couple of drinks later, he said: “Let’s go home. Enough drinks there.” The home was a one-bedroom suite in the tallest hotel in the country. His bedroom faced the resplendent Sheikh Zayed Road. Half-a-dozen bottles adorned the large pantry. “My friends brought from Singapore,” he explained. “Since your wife’s not around, why don’t you sleep over. I have a lot to discuss,” he said. I was proud of his meteoric rise as he said he attended board meetings of Chinese companies where his bank managed private equities.

The young financial analyst probably wanted to run a due diligence on my life, like he does on the financial health of corporates. He said the fact the I sent home half of my a600 salary from The Free Press Journal newspaper in Mumbai would fail his algorithm. So would the truth that my both children studied medicine under the NRI quota. He agreed the fact that I went the extra mile to marry my wife — not once, but twice — after eight years of courtship was an incredible story to emulate. He behaved like the Etihad Credit Bureau, giving scores on my life’s transaction history.

“Your most valuable asset?”

“When the level of my pint goes down.”

He then talked about his “new investment” in a Korean romance. I said romance knows no religion, so a conversion is unwarranted. “Why not?” he asked. It’s the ultimate sacrifice you can make for your love. It’s a reiteration of your commitment,” he argued. I disagreed. I said let love be unconditional. He said he wanted to become rich, but not famous. “Fame curtails personal freedom.” We joked about president Devan Nair who had to slip out of the Astana, Singapore’s presidential palace, in disguise to enjoy the nightlife.

The whole night, he was a student and I was his textbook. He studied me as if he had an exam the next day. As we finally dimmed the light past 4am, the Sheikh Zayed Road skyline sprinkled vivid colours into the bedroom. In the morning I wasn’t sure who woke up wiser — the baby boomer or the millennial? What I did not tell him at the sleepover would remain my scoring point: At 50, you need to learn from a 15-year-old.