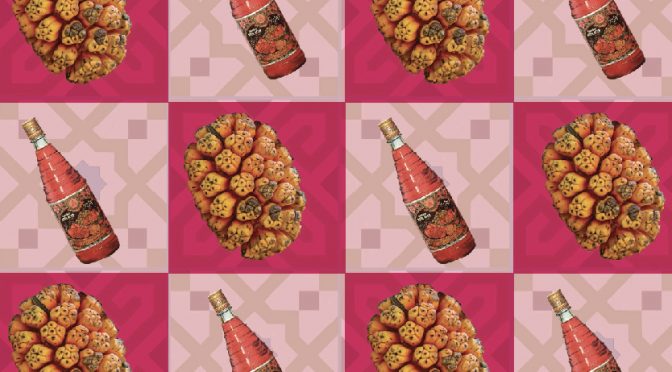 Often some things trigger our subconscious mind and take us back to our childhood. Up until now, for me, it was usually a song or a particular aroma or any kind of a sensory input that would instantly trigger nostalgia. But recently, it was amid a very busy day, a news headline that brought back fond memories from my childhood.

The headline ‘Legal dispute over Hamdard’s control hits Rooh Afza supply’  took me back to the ’90s, to a jingle that my friends and I would often sing, Rooh Rooh Rooh… Rooh Afza!

Being a Delhiite, I  grew up with this TV jingle that showed a bright red, rose sherbet (drink) waiting to be consumed on the table. And the ad used to make repeated appearances on our TV sets that, in those days, aired a limited number of shows from Doordarshan (the national channel).

The only competitors, as I vaguely remember, to this ruby-hued herbal sherbet were the orange drink Rasna and the mango-flavoured Frooti. However, we rarely got to taste these drinks as our mum was very strict. She would never allow the children to go close to any aerated or sugary drink.

But come summer, suddenly the frequency of the beat-the-heat type of ads on TV would go up with the rise in mercury levels.

And the one drink that we would always find in our fridge was Rooh Afza. It was like it never left the fridge. I seriously don’t remember seeing our grey and white coloured fridge without that crimson ambrosia! More so because it was the only drink that we were allowed to have after our evenings out in the park or playground, and it was accompanied by a discourse from my mum. She would laud the benefits of this herbal drink, telling us that Rooh Afza would not only quench our thirst, but it would also make us feel calm and relaxed. I don’t know if it was the effect of her lecturing or the drink, but till date, whenever I drink Rooh Afza it has had a strange, calming effect on me.

This, incidentally, was also the first beverage I learnt to mix and prepare in different ways. I  was barely 10 years old when my mum passed on the recipes to me. From blending it with lassi (yoghurt drink), lemonades to milk shakes, kulfi, chuskis and even ice-creams, I learnt different ways to make this drink.

No guest could leave our house without having a customary glass of Rooh Afza. It was part of any get together at home. Fast forward to Ramadan 2019, and I hear of theis massive shortage of Rooh Afza in India. It has supposedly affected many people because it’s considered a staple at Iftars. Without getting much into the details of why this luminous red syrup, produced by Hamdard Laboratories, had gone off the shelves in India, for the first time, I got curious to find out more about the origins of this beverage.

My research led me to the secret behind Rooh  Afza. Its signature taste and aroma, which reminded me of my grandmum’s attar (perfume), were made of two ingredients — rose water and kewra (extract from the flower of the Pandanus plant). The Rooh Afza story began in 1906, when herbalist Hakeem Hafiz Abdul Majeed formulated the syrup and began selling it on the streets of Delhi. Rooh Afza means ‘refreshing the soul’, which it truly does!

I also found out the real reason behind the calming effect it had on me. The herbal tonic has a blend of ingredients, such as rose, which is said to have this effect. Now I know why the Sikh community (who were our neighbours in Delhi) used to distribute Rooh Afza on the streets during the hot summer days. Besides that,  I was also happy to know that Rooh Afza also has nutritional values and helps maintain the body’s water level.

As I entered home that evening (the day I saw the headline) to break my fast with my family, a familiar sight greeted me.

This time it was not in the fridge, but wrapped in cellophane paper was a bottle of Rooh Afza. It was  kept on the table with a tag – Ramadan Kareem. This bottle was gifted to me an acquaintance. And that really refreshed my rooh (soul)…

Saman has fond memories of her childhood in Delhi