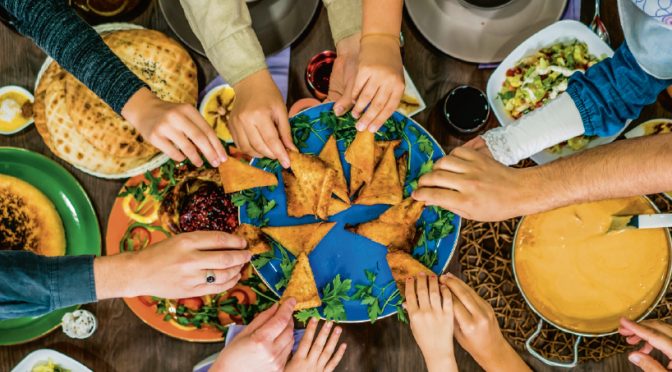 Certain occasions are always associated with memories or maybe those memories are connected with occasions? Whatever the case, occasions live with us lifelong through memories — some happy and others sad.

Ramadan and childhood, for me, irrevocably has fond memories of innocence and knowing I was safe in the presence of the elders.

As a child, the clinking of my mother’s bangles and my father’s insistent coughing would wake me up well before it was time for Suhour. I’d pretend to be asleep and enjoy the sounds and aroma coming from the kitchen, knowing what was coming next.

My father would then walk into our room, knock on the door and wake us up all by gently calling out our names. It was a ritual, not only during Ramadan but also during our school days.

Abbu was very fond of parathas and my mother made sure they were served hot for Suhour every day. He would always have the parathas with yoghurt saying that it would make us feel less thirsty and the entire day would pass easily. He would then round it off with a cup of tea and a cigarette.

There was therapeutic silence during Suhour because all of us siblings would be feeling too sleepy to engage in any form of chatter. We would wait for the call to prayer, literally dozing off while sitting down to recite the Holy Quran, in a melodious way, the sounds resonating in the entire house.

Iftar was equally celebrated with a variety of foodstuff laid out on the table, but my father would always reach out and light up a cigarette first. “What? I didn’t have this the entire day,” he’d say when everyone would look at him accusingly.

Time passed, we moved places, I got married and my sister took over the kitchen for Suhour after my mother fell ill. She would make parathas better than my mother and my father would whisper this to me each time I was home. “She knows how to make the world’s best parathas.”

Abbu, however, hadn’t changed his routine. He would help in the kitchen and then wait silently on the table, puffing away one cigarette after the other.

In 2014, I was on a trip to Europe when I got a call from my family asking me to come back as soon as I could.

Abbu was admitted to the hospital due to lung failure. He was on a ventilator.

Leaving my family behind, I rushed to be on his side, but I wasn’t ready for what awaited me. I tried to talk to him, but he wouldn’t respond.

The only sound coming from his room were those of the machines that were helping him breathe.

Doctors said he was suffering from multiple organ failure and didn’t have much of a chance.

Two weeks later, my siblings and cousins got together for Suhour on the second day of Ramadan.

The same delicious parathas we once enjoyed  were stuck like lumps in our throats. With Abbu’s chair empty, Suhour didn’t feel the same.

I had just stood on the prayer mat when the phone rang. No one wanted to pick it up. It was the hospital. “Are you his daughter?” Yes, I said.

It’s been four years, Ramadan isn’t the same anymore for us.

Each Ramadan, Asma tries to relive her childhood