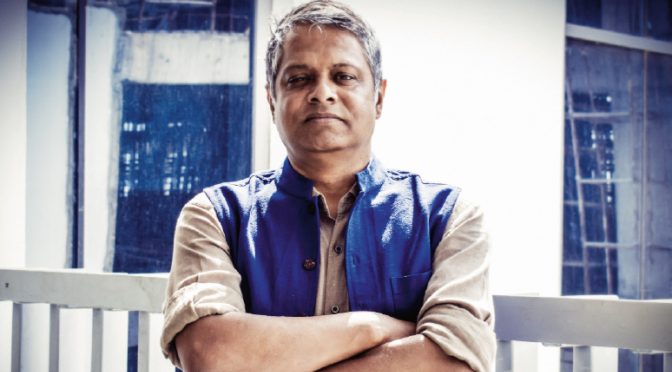 Social media in India may have taken a life of its own, but news channels continue to play a significant role in shaping public discourse. In his new book The Indian Newsroom, journalist and author Sandeep Bhushan maps the journey of Indian news channels. Here are edited excerpts of a conversation with Khaleej Times:

Tell us about your formative years in the Indian media.

My involvement with news television is almost coterminous with the rise of private satellite TV in India. It was around 1993-94 that I started working with Business India Television (BITV), later renamed as Television International (TVI). It began as something promising with fat salaries and excellent working conditions. In the decade of early to mid-1990s, TVI had created a splash. Nobody had an idea how this industry would pan out in the long run. Remember CNN was being beamed only in top hotels and establishments inaccessible to most of us. India was yet to be networked into the global information system of which TV was an important new medium.

Yet, its promise as a new medium with limitless opportunities in a liberalising India was a dream that appeared worth chasing for most journalists who were struggling with low salaries and just-about-respectable working conditions. TVI, however, never took off, largely because it was docked on a fading Russian satellite that had no footprints over India. As a result, pictures were grainy and the channel was unwatchable. Most will remember the break-up of Soviet Union, which had resulted in sundry generals and bureaucrats getting hold of satellites that were then hawked in the open markets. Something like this was happening in India.

But it was unable to sustain the drain on resources without some sort of payback. There were allegations that the promoter was funneling the money elsewhere. Another production house where employment opportunities came along also sank mainly because of bad management.

How would you say access journalism has impacted storytelling at large?

There are two aspects of access journalism (AJ) in India. First why does it have such strong roots?

Because television media in India was forced to develop exactly as non-media industries grew in post-independence India. News was never seen as a unique category that addresses public good and, for that reason, required a different policy framework. This meant that private satellite players were dependent on government license/policy regime. The fact that it took shape within the womb of the state-owned broadcast company Doordarshan bears testimony to this.

AJ is, therefore, in-built into the news discourse. It is best placed to feed into the news cycle. An editor, no matter however big, has to have access to ‘break news’. His/her reputation, newsroom leadership and estimation, in the eyes of the promoter, crucially depend on this.

The collapse of the advertisement-driven revenue model has helped sustain this access-driven culture. With frugal resources, that has taken its toll on long format storytelling where multiple dimensions of an issue can be explored, most television organisations have opted for breaking the news/studio discussion format. Both privilege the elite, the articulate and those who matter in shaping public policy.

Emergence of digital technology that is cheap and accessible has furthered the breaking news culture. Bites are central to India’s television discourse. The arrival of Twitter as a social media force has only furthered this culture. If there is no bite, a Twitter post will do. Often Twitter/social media posts can create news cycles that can last days.

Hashtags, Twitter polls, Facebook posts, etc drive news content for most TV channels — English or Hindi. The disbanding of bureaus and loss of reporters, the real content creators, has shrunk the catchment area that provides ‘news’ and other content for the 24×7 news cycle.

The long and short of it is that AJ does not empower the news discourse and the public at large. It detracts from speaking truth to power.

You talk about the perils of a ‘star system’ in newsrooms. Can you elaborate on that?

Stars are uniquely placed in the newsroom. They personify political and market power and are the promoters’ first choice for the ‘big’ story. They lie at the top of the newsroom hierarchy. Taken together, this creates a fundamentally unequal newsroom that appears ineluctable. While reporters’ foot-slog everyday, the day of the big story belongs to the star — even if it is on the reporters’ beat. Stars also have the first claim over resources. Thirdly, stars also have the first claim over air time in news bulletins. It is not uncommon for the reporter’s story to get spiked in order to accommodate a ‘bigger’ story by the star. Finally, awards and recognition to stars is in-built in the system. They get to do all the big stories that are then sent for various awards. It has to be underlined that stars are far more pervasive in the English language news-space than in the vernacular ones.

Fake news has proven to be a big challenge for journalists in India. How would you say has social media changed the game when it comes to TV news?

Firstly, there is no gate-keeping of social media content, even though it has a crucial role in shaping it. Given the pyramidal newsroom structure where the editor/star/anchor takes all editorial calls, once the ‘content’ is deemed ‘credible’ by him/her, it is included in the news cycle.

Secondly, given the intense polarisation among news networks, the chances of fake news have increased manifold. There are ‘agenda-driven’ channels that will purvey any news, fake or credible, if it helps it to ingratiate itself with the powers that be.

Thirdly, there is no regulatory structure overseeing this, nor is there any concept of retracting fake news. Several hours of news bulletins and talking heads shows get organized around fake news.

Like Trump, Narendra Modi is no less, a peddler of fake news. Recently, his claim that it was he who suggested to the Air Force that Indian fighter planes should attack under cloud cover to escape detection by the enemy radar was shown as a breaking news item. Social media for once came on its own, and ripped it apart.

Investigative journalism is not exactly thriving in India, particularly on TV. What are the causes for its decline?

Given the background of state patronage within which media entrepreneurs emerged and the industry’s acute dependence on ad revenues, investigative journalism has never been the strong points of news television in India.

In fact, access journalism, the iron grip of promoters over news content that shapes newsroom culture, detracts from any investigative reporting. Finally, the issue is vitally linked to scarce resources. No company today is in a position to spend the kind of money required to fund investigative journalism. This requires resources, manpower and has a long gestation, which does not fit into the breaking news culture. Also, with the bureaus short-staffed and populated largely by young reporters, investigative journalism at the moment only appears as impossibility.