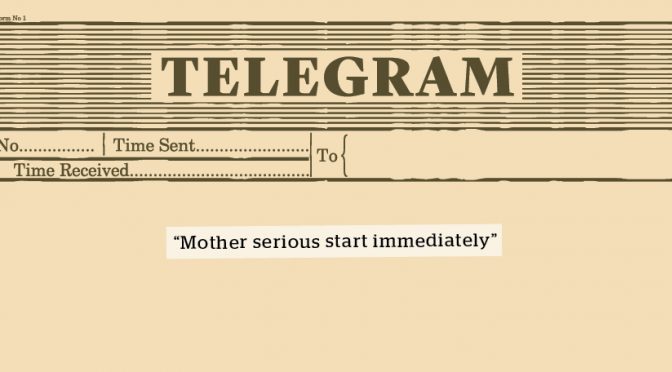 Succinct, sharp, explicit and poignant. No room for a comma or a full point as punctuation was payable at the same rate as a word. The language of emotions has no grammar anyways. This fabled line sent via the now-defunct Indian telegram service was probably the most misused message sent across any platform once upon a time when the phenomenon called the Internet never existed.

No child stayed outstation after reading the message of the most urgent nature. No manager held back his or her staff from travelling to see a mother perhaps one last time. No commanding officer stopped his soldier from waging a do-or-die battle to save his beloved mother. No headmaster prevented a teacher from rushing to the bedside of his first love and recite a few couplets from the Ramayana as the final farewell. Such was the power of the telegraphic message.

So prior to Holi or Diwali, Eid Al Fitr or Eid Al Adha, Easter or Christmas, Onam or Vishu, Indian postal staff pedalled the length and breadth of the country to deliver thousands of “Mother serious” messages so that family members were back home for the festivals. Whether genuine or fake; birth or death; marriage or divorce; appointment or retrenchment, we tipped the telegram delivery man handsomely. Because mothers had to fall ill “seriously” every time we were denied a leave of absence.

It was an emotional blackmail of the bureaucratic system. The word mother was so hallowed no one asked for evidence to prove she was genuinely ill. In most cases, the mother was not actually a party to the fraud that once cost India millions of man-hours. The mother was just a victim of malevolent patriarchy that painted men in hues of idealism.

The telegram in itself was kind of villainous in nature, having played a central role in tragicomedies that ushered in terrible peripeties in many lives. I was one such victim in 1988.

The Bombay Press Club was a transit point between work and home for many old-school journos like me. On an evening I was about to leave the offices of The Indian Post newspaper, a couple of colleagues, including Jagan, the eldest among us, requested to accompany me. Which wasn’t a strange thing because we always piggybacked on whoever had a fat pocket on a given day. But what was strange was after a couple of drinks they all wanted to come home. They even debated whether I should drink at all. The crowd snowballed as a few more friends joined at the VT train station.

Having a two-bedroom apartment, space never bothered me, but the dinner I had cooked in the morning would not suffice. To my surprise, one of them bought dinner at Sion-Koliwada on the way home, but no one talked about more booze. It was unthinkable not to offer a drink of moderation to a medley of colleagues coming home, some for the first time. At home, people talked in groups — some in the balcony, some in bedroom No.1, some in the unkempt bedroom No.2 of friend Nandan and some on the building’s stairs.

A couple of minutes later, Jagan asked me to follow him to a paan shop. On the way, he burst into a eulogy about his mother. I heard what a good soul she was and how he had coped with her loss.

“Like every mother,” I said. He sighed how much he missed her.

“Like every son,” I said. He quoted Tagore to drive home the truth that life is a total of meetings and partings and all must face up to the final parting.

“You need to be bold, Suresh. Such a day has arrived in your life. Your mother is no more.” Jagan said all this in one quick breath, after which he swallowed a mouthful of russet-coloured betel juice. He then avoided my eyes as if the philosophy of life and death had weighed him down.

“A telegram came. That’s why we all are here.”

I shed no tears. I did not want to cry over a couple of cold shoulders. I demanded they take me to my then-best friend Raju who lived 15km away at Kanjurmarg. I was sure he would work out the logistics better and faster than any of my colleagues. Raju and I hugged and shed a sea of agony. He made arrangements for me to fly to Kochi early morning.

But I still refused to believe my mum was no more. Just a few days ago I had received another dispatch of grievances that smelled of her tears and I had replied that there’s always light at the end of the tunnel. I believed a fighter like her could never give up so easily. I wanted to make a call but back home there’s no telephone in a one-kilometre radius. The only person who had one was my wife’s neighbour, but it’s unfair to call the businessman in the dead of night. Also, what would I ask him — if my mother were still alive?

After much hesitation, Raju and I travelled to the Dadar telegram office and called the neighbour.

“Sebastian, did you notice any activity at wifey’s place?”

“There was a telegram that my mother passed away.”

“Not possible. No one mentioned. Check the telegram to see the sender.” He hung up.

“Where is the telegram?” Raju asked me. I asked Jagan. He asked Danto. And Danto asked many more. It’s with Nandan, someone shouted. And where’s Nandan? He is in the office. We called him and asked him to read out the message, which said, “Mother passed away. Haridas.”

I was sure it’s this cousin’s mother who had passed away. She had been ailing. He probably sent the telegram knowing I was one of her favourite nephews. As I prayed for her soul, the sun rose over Antop Hill and the crowd of “mourners” disbursed. I pulled out an inland and started to scribble: