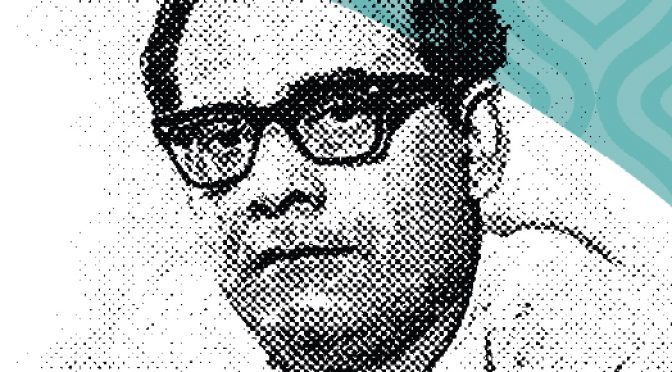 When I was knee-high to a grasshopper, I used to listen to Hemanta Kumar Mukherjee’s renditions of Rabindra Sangeet: Diner Sheshe Ghumer Deshe, Mone Robe Ki Na Robe, and so on, which my baba (father) would play on his record player. Some of the lyrics were unfathomable back then (and most of them still are), but there was something in his soulful voice that kept lingering in my consciousness.

As I grew up, I got to know the multi-faceted persona of Hemanta and came to adore his brilliance and versatility. Apart from Rabindra Sangeet, this powerhouse of talent sang for Bengali and Hindi films with equal ease and elan. Not just that, he also scored music in a number of movies.

His journey into the world of Hindi film music  started when Hemen Gupta, a well-known film director and a close friend, summoned him to Bombay (as it was known then). His  debut as a Hindi music director in Anandmath (1952) — based on a revolutionary tale written by the iconic Bankim Chandra Chattopadhyay – -— gave him the much-needed recognition. It had the song Vande Mataram for which Lata Mangeshkar is supposed to have given 21 takes. Hemanta okayed it only after he was fully convinced with the final result; such was his professionalism.

Despite the moderate success of Anandmath, Hemanta used to feel homesick and wanted to go back to Calcutta. However, S. Mukherjee, the owner of Filmistan, stopped him by telling him that he would only let him go after he had given him a massive hit. And that came in the form of Nagin in 1954. What a musical treat it was: Man Dole Mera Tan Dole, Tere Dwar Khada Ek Jogi, Mera Dil Ye Pukare Aaja and O Zindagi Ke Denewale, the songs catapulted Hemanta to overnight fame, and the music created on the ‘been’ (an instrument used by snake charmers) hypnotised an entire generation. But as Hemanta revealed in a rare interview to Vividh Bharti: “The been music that you hear in Nagin was not created from the actual ‘been’. I used a harmonium and clavioline to make it. And the clavioline was played by none other than Kalyanji Virji Shah (of Kalyanji-Anandji duo).”

Nagin won Hemanta the Filmfare Best Music Director Award. In 1954, another film, Jagriti, also showcased his creative genius. Songs Aao Bachon Tumhe Dikhayen and Sabarmati Ke Sant Tune left the masses spell-bound. It was an era when India had just got her Independence and the songs struck a chord with the audience.

When the legendary Guru Dutt roped him in for Sahib Biwi Aur Ghulam in 1962, Hemanta was a little hesitant that he might only ‘experiment’ with him. But Dutt knew the man’s potential well. The film’s score was simply sensational. My personal pick is Meri Baat Rahi Mere Maan Mein as it brings out the melancholy of a lover in a subtle manner.

Kohra, Bees Saal Baad, Anupama and Khamoshi were some of his other classics. In 1965, Hemanta scored the music for Faraar and one of its romantic songs, Pyar Ki Dastan Tum Suno To Kahen, penned by Kaifi Azmi, is a gem that’s hardly heard today. It was only around 1985-86 that I happened to hear this mesmerising tune during the TV programme Rangoli. There is an unmistakable distinctiveness of Hemanta in each of his compositions, I realised. It is interesting to know that Bees Saal Baad and Khamoshi were released by Geetanjali Productions — which was the brainchild of Hemanta and his wife Bela. The couple had forayed into film production in 1959.

While being consumed by music direction, he never forgot his first love: singing. At regular intervals, he belted out hit solo numbers, his duets with Asha Bhosle  and Lata were equally popular.

Progressive in his approach, Hemanta believed that music had no boundaries. He averred in an interview: Sangeet shor nahin hai (music isn’t clamour). It should be melodious. “Anything that’s pleasant to the ears and provides solace to the heart is music,” he had pointed out. Hemanta could be dubbed as the first Indian playback singer in Hollywood as he lent his voice in Conrad Rook’s Siddhartha and also rendered music for the English film.

From 1935, when Hemanta recorded his first song for All India Radio to 1989 when he passed away, his journey was chequered, but very eventful and enriching. The man who wanted to be a short story writer turned into a singer-music director par excellence. His incredible talent aside, it was his humility that won him hearts everywhere he went, and earned him respect.

On June 16 this year, he would have turned 99. 2020 is his birth centenary and the music fraternity must mark it with celebrations and keep alive his glorious legacy. Baba’s record player may have been reduced to just a showpiece, but I have stored Hemanta’s records in several boxes and his voice resonates within.