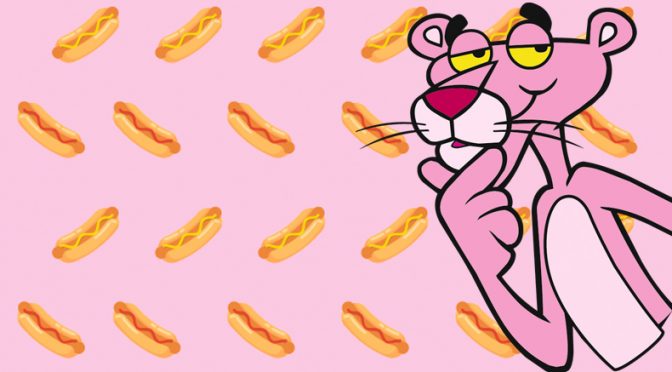 Assume that when people think about the Pink Panther, there are a few things that immediately pop up in their minds. There is, of course, the fact that you are looking at an animated panther who walks upright and is a stunning shade of pink.

Then there is the walk, which can best be described as a relaxed form of skipping. Lastly, and perhaps most iconic to the character is the musical theme; Henry Mancini’s unforgettable saxophone composition never fails to have listeners either bobbing their head gently to the beat or humming it under their breath.

However, there is one more feature that might not immediately spring to mind, but which is an undeniable association that I have with the character. I am referring to our beloved panther’s love of hot dogs. Now, people might be surprised when I say this, but the first time that I ever had a hot dog was solely because of my love for the character. I remember watching the cartoons with my younger brother as a little girl and thinking that nothing looked as delicious as the hot dogs that the pink feline was so very fond of. Looking back at the cartoons now, I realise that the Pink Panther ate a lot of junk food, but it was the hot dogs that captured my imagination; so much so that I asked my dad if we could have them for dinner one day.

When I think back to that request made all those years ago, it is hard not to break out into smiles as a result of what followed. The next time that we went to the supermarket, it was clear that my dad was a man on a mission. In the span of a few minutes he had everything that was needed to make the hot dogs – exactly like how the Pink Panther had them, he assured me. I was just shy of four-years old at that point, but I remember vividly how my dad took the time to toast the buns before carefully placing the hot dog inside and then spreading ketchup and mayonnaise over them. I even remember my mom telling him to skip the mustard because the kids might not like the slightly bitter flavor of the condiment. Finally, he put the hot dog on a plate and placed it in front of me, and there it was – my very own Pink Panther hot dog.

Now, I have had several hot dogs since then, but none have ever come close to the sheer deliciousness that I experienced that night. Some people might say that it was the excitement of finally eating something that I had only ever seen on TV which no doubt contributed to me describing it as the most delicious food that I had ever eaten; but, I can assure you that that was not the case – those hot dogs were made by my dad with all the love that he had in him. And that will put them ahead of any hot dog that I will ever eat at a restaurant, every single time.

Rohma wishes that she would run into more people who have the Pink Panther theme as their smartphone ringtone.